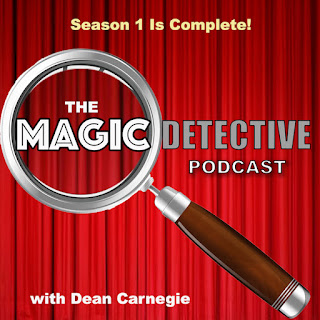 With the addition of episode 31, I've decided to wrap up season 1 of my podcast. I am NOT stopping the podcast. It will be back in October. I just realized I was coming up fast on the 1 year anniversary and with all that is going on in my life, now would be a good time to stop. One of the major things is a move to another state. So right now, my library of research material is split between two locations and it would make doing the podcast somewhat difficult.


When I first decided to do the podcast, I was unsure if I would even find any listeners. Though I figured if a few of my blog readers went to the podcast, I'd be ok. The blog has traditionally had a LOT of readers, though that has declined since my focus has been the podcast. As of right now, I have over 4200 downloads of the podcast. Those are not huge numbers by popular podcast standards, but for a niche topic like magic history, I'd say those are pretty good. And the best part, they continue to increase each month as more and more people find out about the show.

I took the approach to just jump in with both feet knowing I'd figure out how to do the podcast along the way. I did enough preliminary research to know what I needed to do on the backend. The most important thing was sound quality, as I noticed that was one thing that could make or break a podcast. As far as topics, I didn't really think that would be an issue. I had an early list of some 30 potential stories to cover. That list then grew to 100. And now the list stands at over 150. So there are several years of episodes planned.

My first thought was to do the show kind of like popular talk radio shows, with segments, a main topic and then shorter segments. But I don't think I was quite pulling that off the way I had wanted. Then a friend of mine contacted me and said, 'why not try one topic'. So I did, and by episode 4 (Servais LeRoy) I was onto the one topic concept and that worked out better. Another listener contacted me and asked if I could include the references of where the information was coming from, so I soon added the book/magazine references as well. I love the fact that my listeners, YOU, have helped shape the way the show has grown.  One other thing I've attempted to do is link episodes. So if there is a reference to a certain magician in one podcast, and I've covered them already, I can tell the listener to go to Episode such and such, to learn more. IF I were a listener, I would LOVE this particular service.

I think one of the biggest surprises was that it took 3 Episodes to cover Harry Kellar's life. I really covered a lot of ground in those podcasts. The only person who has taken more is Houdini because frankly, I could have just done the entire podcast on his life. In truth, I contemplated that originally, and you'll notice that Houdini's name comes up in almost every podcast. I think there might be 3 podcasts that his name is not even mentioned. But other than that he is a fixture of the podcast. And in Season 2 you can expect considerably more Houdini.

I love the fact that I covered so many obscure magicians like Wyman the Wizard, Brush, Minerva, and Ablini. They all had incredible stories to tell and deserve their place in the history of magic. As I researched each of them, I contemplated how they would feel, all these many years later to hear their name being spoken of. I try to give everyone a fair shake and if there is a lot of 'negative' stuff to their life, to not focus on it, or at least approach it delicately. I hope I've been successful there. The one person who comes to mind is The Great Raymond. He had a difficult life. He was a great performer, but not the kindest person offstage. Albini was another, he was an alcoholic and chose to insult his audiences during his shows. I believe this was his style, kind of like an early Don Rickles. However, some audiences 'got' him and others did not. And sometimes he was sloshed when he was performing which didn't help.

I think one of my favorite episodes was the one of T.Nelson Downs. I was amazed at the amount of information I discovered on Downs. I continued to find info even after the podcast was completed. I did an extra article on Downs here on the blog to cover something I missed. I could probably do another episode on him easily if I really dug deeper.

My least favorite podcast was Frederick Bancroft, but not for the reason you might think. I did a great deal of research and was happy with what I uncovered. Then as I was scripting out the podcast, I learned that Gary Hunt had written an article on Bancroft in Magicol Magazine, and I didn't have access to it. I just KNEW that some of the stuff I had would potentially be wrong. Sure enough, AFTER, I put up the episode, I found the article and Gary had discovered details that corrected the history. Bravo for him! But not so happy for me. I did mention the corrections in the following podcast. Oh well, win some, loose some.

Another favorite podcast was Daisy White. She has always been a bit of a pet-project. She is an enigmatic figure in magic. Finding details has not been easy, but I did uncover some things a few years ago and wrote about them in the blog. I was always determined to find MORE. And this time around I did. But not only did I find more, I found photos of a young Daisy White!!! I am certain these photos have not been seen in over 100 years. So it was quite fulfilling to include those on the blog at the same time as I did the podcast episode.

About half way into the season I had this idea to start doing short podcasts, which would run no longer than 15 minutes. It was a big experiment really, and it turned out to be successful and I'd received a lot of positive comments on the short episodes. Some performers of old, just don't have enough information out there to cover a 30-45 minute podcast, but I can usually get at least 10 minutes worth. So the short episodes fit the need. The short episodes include: Frederick Bancroft, Litzka Raymond, Houdini & Anna Eva Fay, Minerva, Albini, and finally Talma Queen of Coins.

Oh and the two Doug Henning episodes were personal favorites because Henning was someone I saw in person and looked up to very much.  I was also happy to start including females into the mix, and though I've only covered a few so far, there are many more to come. The episodes featuring females include: Litzka Raymond Gibson, Minerva, Anna Eva Fay, Daisy White & Mercedes Talma.

I think the biggest revelation I had doing this podcast was finding out how inaccurate the David Price book, A Pictorial History of Conjurers in the Theatre is. Don't get me wrong, its a fantastic book. And it gets so much correct. But since the book was published, many details of various magicians lives have come to the surface and they are different from what is in his book. I still use it in every episode. I just try and double check the information. I do know a lot of his information came from Mahatma and The Sphinx. As I have mentioned on the podcast, I would like to include some interviews with other magic historians and collectors during Season 2. I do not intend to do the entire season that way. But it would be nice to give the spotlight to some other folks so they can share their passion for magic history here. I am also considering having on some guest narrators.

There will be some changes coming to the blog too. About 80% of the Season 1 podcasts were scripted. So I plan to take those and put them up as blog articles, and include photos and images that I obviously cannot do on an audio podcast. It will help with SEO and will help future researchers. Because this platform is owned by Google, it tends to rank fairly high. So for those people who like to read, you can enjoy the blog. For those that like to listen, you've got the podcast. And for those who like both, hey, it's going to be awesome for you.

Right now I plan to have Season 2 start some time in October 2019. I am contemplating doing something special for the first couple episodes, but that I'm keeping to myself for now.  I do know I'm going to have more contests throughout the year. With any luck, I may even have some swag for fans of the podcast. I also intend to do more outreach to pick up a larger audience. So expect great things for Season 2! Until then, why not go back and re-listen to some of the podcasts, or check out the ones you missed. October will be here soon enough!

Thanks for being a listener and reader of The Magic Detective!
Posted by Carnegie