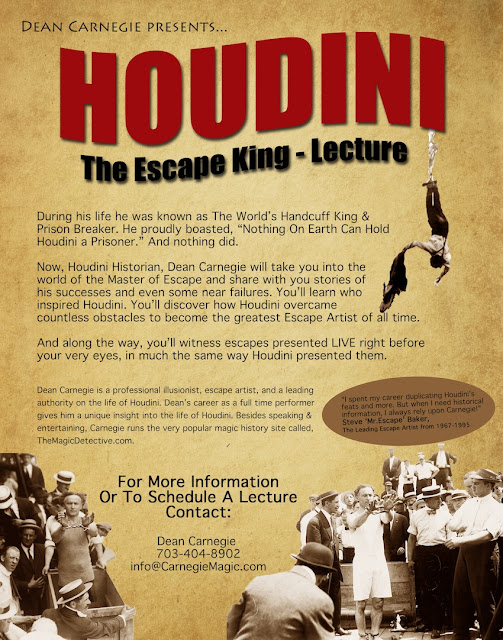 Carnegie has had the great opportunity to speak about Houdini on many occasions. His main lecture on Houdini is called, "HOUDINI - The Escape King - Lecture." This lecture is a double feature, you learn about his many escapes, stories of success, and even a couple failures. You'll hear stories about famous people who inspired Houdini. And you'll get to see escapes! Escapes from ropes, chains, handcuffs and more.This talk is ideal for historical societies, magic groups, and anyone wanting to learn more about Houdini and see the types of escapes he presented during his life. 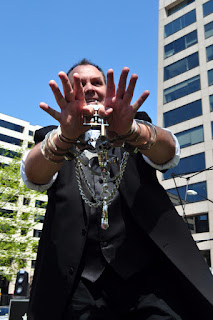 The original version of this lecture which featured mostly Houdini history, was presented with great success, for a number of libraries in the Washington. D.C. area, back in 2006. Then in 2013, Dean presented another version of the lecture at the First Houdini Festival in Danville, VA. This time, the emphasis was more on the actual escapes with the occasional biographical info on Houdini. In 2016, Dean presented the escape portion from the lecture as part of Houdini in DC, sponsored by the D.C. chapter of AtlasObscura.com. The show went so well, he was asked to take the tour group over to the location of the old Keith's Vaudeville Theatre and spoke for another 30 minutes on Houdini in Washington. In 2017, AtlasObscura in DC again asked Dean to be part of their 2nd Houdini in DC event, and this time the lecture include more stories and more escape.

Today, the lecture incorporates, both the history and actual escapes. There are some well known escapes missing from the lecture. For example, the Milk Can though spectacular, is not a practical escape to present in most places, and the same can be said of the Water Torture Cell. Both, impressive feats, but logistical nightmares. Not to mention, terribly messy with hundreds of gallons of water. So those two actual escapes will be missing from the performance line-up. But they are still discussed and quite a lot of history is shared about these two marvelous creations of Houdini.


Best way to reach me about speaking is by filling out the form below. I will get an immediate email notification.  If this is for TV or Radio, feel free to call me at 703-404-8902If you're interested in the Houdini -The Escape King Lecture, or contact me via info@carnegiemagic.com  and put Houdini Lecture in the subject heading! Thanks

Check out this video of me talking about Houdini on an International TV Documentary. (It's in German)