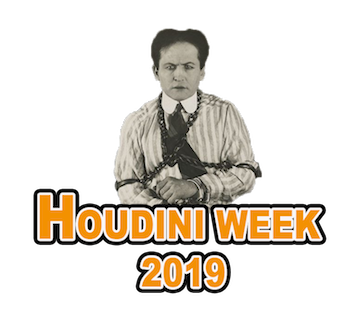 Over the years, I have had a Houdini Month and or Houdini Week here at the blog. This year, I'm trying out a Houdini Week over on the podcast. It involves a lot more work, but so far things are coming together well. You can also go over to MagicDetectivePodcast.com and listen there. I'm on all the various podcasting sites, iTunes, stitcher, spotify, iHeartRadio and more.

On Monday, Oct 28th, I posted an episode about The Man Who Made Houdini. This was basically about Houdini & Martin Beck. I talked about a new theory that has arisen among some Houdini historians that Beck never saw Houdini in St. Paul, but rather it was a surrogate and only later in Omaha did Beck and Houdini meet. First, I think it's a valid theory. But I explore it a bit further and give you my opinion on the matter. You can listen to episode 32 below.

On Tuesday, Oct 29th, I posted an episode about Evanion-The Royal Conjurer. Henry Evanion was one of the early magic collectors as well as a performer during the Victorian era. He ended up selling part of his collection to Houdini, which became the cornerstone of Houdini's magic history collection.  It's a wild story, and you can listen to it below.


On Wednesday, Oct 30th, I share with you the story of Houdini's Forgotten Protege. I've discussed him here on the blog in the past. This time around I've gathered even more information, so I'm sure you'll enjoy this episode. You can list to it below.

On Thursday, Oct 31st, I talk about one of Houdin's game changing escapes, The Milk Can Escape, or the Death Defying Mystery. You can listen to the podcast episode below.

On Friday, Nov 1, I let Houdini talk for himself. I feature an address he gave before a club in Boston in 1922 and the final article Houdini wrote that didnt make it to print until after he had died. You can listen to this podcast episode below.