The Amazing Randi has Died 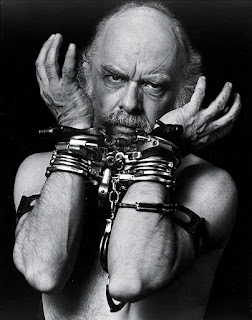 James, the Amazing, Randi has passed away. He died on Oct 20, 2020 at the age of 92, complications of old age. I suppose if there is a way to go, THAT is the way you want to go. A life well lived. I've been reading the various stories about folks who knew Randi or met Randi. I'll share with you some stories of my own.

I remember the first time I saw Randi in person.  It was at FairOaks Mall in Fairfax VA. He was walking through the Mall. I spotted him as I was shopping. I was a teenaged kid. I followed the man around the mall and I mean completely around the mall, from one end to the other and back, but never got the nerve to go up to him and introduce myself. Probably a HUGE mistake.

A few years later, I was in Al's Magic Shop on my lunch break from work and there in the shop was The Amazing Randi. He was sort of holding court. Telling jokes, sharing stories. I think, I said hello. I think. It was safer ground and I was a few years older at that point.

Fast forward yet another couple years. Somewhere along the line I began a correspondence with Randi. We shared several letters back and forth. He had included his business card. So one day I picked up the phone to call him. I wanted to inquire about handcuff escapes. He had a rather interesting answer. At the time I thought it was a rather incomplete answer. But he wasn't wrong in the information he gave me. It just wasn't a very extensive answer, the one I suppose I was looking for. Still we had a cordial talk and I believe he left the door open for further inquiry if I had more questions.

I always enjoyed watching Randi on TV. One of my early books on Houdini was the one he wrote with Bert Randolf Sugar. I read that book many times. I knew Randi was a fan of Houdini, but I suppose I didnt quite understand the extent of his connection. He was quite the escape artist for a period of time. He had a very amazing straightjacket escape over the icing waters of Niagara Falls, which can still be seen online.

Through my friendship with Steve Baker, I learned even MORE about Randi. They were competitors and not really friendly competitors. I think Randi thought Steve was crazy.  Steve thought less of Randi. LOL the old school escape artists and their rivalries, still cracks me up.

I have more stories about Randi, but I'm going to hold onto them and share them on the podcast. Of course, at this point I guess I'll need to do a podcast specifically about Randi. He more than deserves it. He influenced a lot of people: Dean Gunnerson, Penn & Teller, Uri Geller (maybe not in a good way), Banachek, Me, and many others. We will miss you A-R.