The Trick That Fooled Houdini 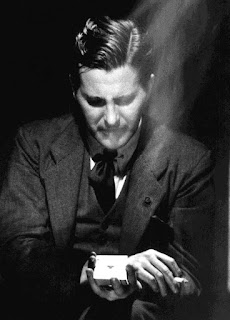 The event took place Feb 6th, 1922 at the Great Northern Hotel in Chicago. There was a banquet for the Society of American Magicians and Houdini was the guest of honor. At some point in the evening Sam Margules brings Vernon over to meet and show Houdini a trick. One article I read said, Houdini rolled his eyes and reluctantly agreed. The young Dai Vernon, brought out a deck of cards, shuffled them and had Houdini remove a card and sign it. Houdini wrote 'HH' on the card. Then Vernon, took the signed card and placed it second from the top. Everything was very slow and deliberate. Vernon then turned over the top card and there was the selected-signed card. Houdini was stunned. Dai Vernon did the trick again. The second time Houdini was also surprised. He began to call out possible methods, all of which were incorrect. A third showing, a fourth, a fifth, a sixth, and seventh and Houdini was fooled each time. One telling of the story features this addition, "Mutual friends seated at the table said: "Don't quibble, Harry, you're fooled this time". According the a promotional piece of Vernon's, Houdini finally made the admission and added, "Vernon is certainly the best man I have ever seen with cards."
Thereafter, Dai Vernon, who was going by Dale Vernon at that time, used the moniker 'He Fooled Houdini' in all his promotions. Quite reminiscent of Thurston's approach with Herrmann. If you're wondering about sources, I found this story in Genii Magazine, but also in the book, He Fooled Houdini-Dai Vernon A Magical Life by Bruce Cervon and Keith Burns, and it's in other books as well.
And now, watch The Trick That Fooled Houdini!