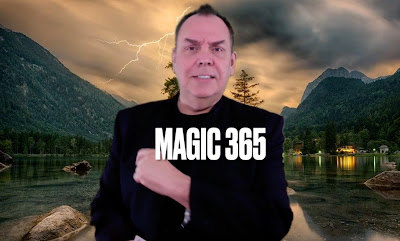 Ok, that title is a bit misleading. The truth is, it's 365 magic videos in a year. They might sound the same, but the truth is, I know I won't be able to get one video per day done. But over the course of the year, there will be 365 videos, if not more.

The next question is, why? LOL. That's a good question. There are multiple reasons. One is exposure. Another is it's a challenge. A third, and one that I wasn't expecting, it's improving my magical skill sets. But the main one is exposure. And I'm approaching this in a very unorthodox way. I'm putting the videos up on multiple social media sites: Facebook, Instagram, Twitter, Youtube, and more. And I'm putting them up on international social media sites as well. I just did my first Russian video, and I'll follow that up with a Norwegian, Swedish, Italian, and French version of various videos.

The magic videos are generally short. Though some of them have longer routines. Most of the material will be stuff that is no longer in my working repertoire, however, some of the material is finding a new place in my show. There are two things so far in the first 20 videos that really struck me. One was the Linking Hearts. I had this for years, and never used it. I pulled it out strictly for the video and was astonished by the number of views and comments it received. Clearly, it was an effect that people could relate to. As a friend of mine said, "it's so much better than stupid rings! People can identify with hearts and it opens a world of possibilities for stories and presentations."  Ok, I'm sold.

The next item was a rather astonishing Monte effect which has a whopper of an ending. I saw my friend Bob Sheets do this a few years back. He had a slightly different ending to his, but it was no less a fooler. I inherited the effect from a friend who passed away, so I decided to learn it for the video. It's just killer. I will post both of those videos below.

I'm going to try and create a 'magician's only' page about the Magic 365 videos. Which will have information on each of the various effects and where they can be found, whether they are commercial items, or in books, or original creations. I'll try and credit folks appropriately as well. I don't have that ready to go yet, it's coming.

If you are wondering what this has to do with 'magic history', well to be frank, lots. Over the course of the year, there will be plenty of historical pieces in the line-up. In a way, almost all the magic we do is steeped in magic history. Take the One Cup and One Ball mystery created by Al Wheatley. It's such a common piece today, we forget about it's history. And of course, it was a variation of the classic Cups and Balls, which is hundreds, if not thousands of years old.

One thing that I haven't really yet pointed out is that I will eventually be posting 'variants' of the episodes. For example, the video that is on Facebook, may be different from the one on Twitter or TikTok. As I build an audience, I hope that people will search out the variants. Also, I'm hoping to open a dialog with viewers as well, even taking requests. This is part of the challenge really. If someone speaks up and says, "can you do something with a candy bar, or do something with tissue paper" or whatever, I'll see what I can come up with. Granted, there may be existing material to choose from, so in those cases, why re-invent the wheel? But in other cases, why not create something new, or some new variation of an older routine.

So my friends, please enjoy, Magic 365 this year and beyond!