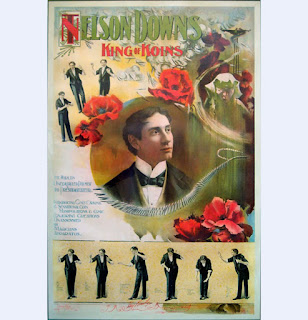 My most recent podcast (#23) was on T. Nelson Downs. I had never heard much of his life story so I was amazed at what I uncovered. Did you know he was a twin? Sadly, his brother did not survive. Did you know he did other kinds of magic besides coin magic? Did you know he retired at a time when most performers were just making it really big?

His friends called him Tommy. He created a sensation in the entertainment world by doing an act 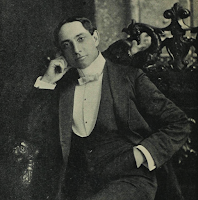 with only coin manipulation. After consulting with some of the great minds of magic and having them all tell him it was a terrible idea to do 'a coin only act' he decided to do it anyway. He was right and everyone else was wrong. His speciality act soon gave way to other specialty performers. He was known as the King of Koins and In 1899 he was making a huge splash in London with what would become one of the first specialty acts in the nation.

The story if often told that Martin Beck told Houdini to drop the magic, keep the escapes and the trunk trick and he would book him. Well, Houdini's career started to really gain steam after that.
Martin Beck made arrangements for Houdini to go to England in the fall of 1899. However, he didn't actually arrive until Spring 1900. Still, Houdini too was about to take England and all of Europe by storm. These American performers, Downs and Houdini, were about to be the toast of the town in London and beyond!

Here is an amazing fact about Houdini and Downs. They apparently met each other at the Chicago Worlds Fair in 1893. Houdini was working the Fair. I can only assume Downs was visiting as he was employed by the Chicago & Northern Railroad Station. In the July 1901 Mahatma Magazine, this appears, “Travelers returning from Europe report the existence of a powerful mutual admiration society composed entirely of magicians, whose acts are features. The passwords are, “HOUDINI, I’ve seen all kinds of magical acts, but without exception, your is really the acme of perfection.” OR “DOWNS, I don’t often praise a man, but whenever I see your act I can’t help thinking that there can never be another act conceived that will be so really marvelous” It is rumored that there are only two members of this society. 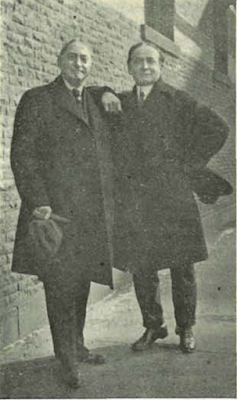 As I mentioned earlier, Downs was already in London when Houdini arrived. But they spent many hours together talking magic. As you've read above they became good friends during this time and socialized often. But as close as they were, when Downs finally left Europe it would be many years before he would see Houdini in person again. This is the unfortunate side of being a traveling performer.

One great story from the life of Tommy Downs takes place in London, while both he and Houdini were appearing. In the November 1930 issue of The Sphinx, T. Nelson Downs relates a story of meeting up with Houdini at their hotel. Downs took from his trunk a ring of 52 keys and said to Houdini, "Here are the tools you do your act with." Houdini replied, "Tom, I don't use keys. You know I did not have the money to buy the keys" etc. Then Downs said, "Well you can't open them with hot air!" (Hilarious!!!)

There is a handwritten quote to Downs from Houdini which reads, "To: T. Nelson Downs, One of the old guards, and one of the Historical Lights of magic. Best Wishes from always the same, HOUDINI, April 1921"

In a Feb 1923 issue of MUM, Downs is sharing a story about what it takes to succeed in magic. He makes a point that a magician is an actor-hundreds of people can do tricks but they cannot all CONVINCE. And he stresses this word CONVINCE. It is the quality that makes one person a true magician/artist in the eyes of the public and another one just a mere trickster. He goes on to point out that people didnt go to see Kellar and Herrmann because of tricks, rather it was their personalities that audiences wanted to see, the tricks were incidental.

Next he goes on to describe a trip he was making that he had to get up at 6 a.m. with 20 degree weather outside and then would have to travel 75 miles to get to the destination to see this mystifier. He says, "Can anyone imagine me going seventy five miles to see a mere magician do tricks??? NOT ON YOUR LIFE" he says. But he wasn't going to see a mere magician, and he knew that..
When he arrived at the theatre it was sold-out. Thankfully he had his seats down front reserved. Here is what Downs wrote, "After witnessing several interesting acts, the 'star' of the program THE ONE AND ONLY HOUDINI himself made his entrance. It was 21 years since I last saw him at Dusseldorf, Germany"

Now listen closely as Downs gives a very solid description of Houdini in action. "Houdini made a few introductory remarks relative to his performance and retired to prepare for the same. The screen was dropped, a movie shown of Houdini being bound and tied; then the curtain went back up and there was Houdini, bound and tied, as shown in the picture. He made a quick release. Then the screen was lowered again and showed Houdini  in action, actually jumping from one airplane to another, in mid-air (scene was from The Grim Game") then suddenly the machine fell 4500 feet, according to the film, and I nearly fainted it was so realistic. Besides, it was the truth, for you know the camera doesn't lie; remember that! Well, then came the crash; the plane fell to the ground, and our hero saved the girl. After that, I could be made to believe anything, and I am convinced that the balance of the audience  were in about the same mood. Next, Houdini called for a committee to come upon the stage and inspect everything. I was commanded to come up. There were doctors, scientists, and children. His first feat  completely mystified and baffled everyone, including the scientific gentlemen and myself. I was positive in my own mind at the time the manifestations took place ----that I was witnessing a purely spiritualistic phenomena, and that this man Houdini was a genuine spirit medium, but did not wish to acknowledge the fact, possibly for business reasons; for didnt I see him actually swallow several packages of needles, and then swallow several years of thread, drinking a glass of water to aid digestion, and then, didn't I see the thread actually pulled out of the medium's mouth by one of the gentlemen----all perfectly and beautifully threaded? I certainly did! And I wish to emphasize the fact that this was a miracle, if there ever was one. I repeat, that this particular miracle was accomplished on a full-lighted stage, under the strictest of test conditions. Surely, there is no chance for fraud or chicanery here! Here was a real medium, if there ever was one---of this I was thoroughly convinced.

Then came the water tank escape, bordering on the supernatural; in fact, it was supernatural. Here Houdini was locked upside down in a tank of water, to all appearances it was a physical impossibility to escape or breath under the water. Yet, he did escape, after actually being submerged in water for nearly two minutes, by my watch. The suspense was something fierce! That two minutes seemed like two hours to me, and I almost lost control of myself and come very near to grabbing the ax that was to be used by Houdini's trusty assistants in case of some unforeseen accident. It was not until the next day, after I had returned safely to my native town and to my own domicile, that I awakened to the fact that I had been bulled, bunked, bamboozled, misdirected, and grossly deceived but HIGHLY ENTERTAINED by a clever necromancer---a mere magician." That later part, 'a mere magician' clearly said tongue in cheek. Downs had incredible respect for Houdini and vice versa.

I love this description of Houdini's act and Down's reactions to same. This was not the handcuff king (who was great by the way) he remembered in Europe, but rather the very seasoned professional mystifier with thousands of performances under his belt. Downs was clearly impressed!

And a letter sent to Downs on Houdini's stationary from 1926 reads, "They are still talking about your wonderful coin work here. They all agree with me that you are the greatest manipulator of coins that ever lived. Your work with the ten dollar sized coins is simply marvelous and shows your incessant and tireless hours of practice. I am attaching the well known Binet "Pyschology of Prestidigitation" and am quoting your work in my article which is the highest compliment I can pay you. YOU have made The Misers Dream a reality, With Kindest regards and best wishes, Sincerely yours HOUDINI"

In the Ken Silverman book on Houdini it states "Downs like several other magicians had matured on the shady side of the law. According to Houdini, 'he ran a fake magic shop, worked for a fake spiritualist and had been wanted by the federal govt. for a swindle'."  Now, I must say, I have done some pretty extensive research on Downs, and I didn't see anything anywhere that suggested he was a dishonest person. Everyone who spoke of him, spoke very highly of his act and of him as a person. I think he had a mail order magic business, nothing wrong with that. As far as working for  fake spiritualist, I didn't find any info there. Nor did I see anything on a supposed 'swindle.' But its possible Downs was the one who got duped in some deal which was why he was involved.

Finally there is this short piece which appeared in an old MUM, "Should I live to be a thousand years I'll never forget the wonderful time I had East. Everyone, everywhere, Houdini in particular, seemed to go out of their way to show me a big time and I don't think it will be my last trip. On reflection I can't imagine how I managed to stay away from little old New York for fourteen years." T. Nelson Downs.

It appears that the two men were very close friends and stayed in touch by corresponding. Houdini as you know died in 1926. Downs, who was older, lived till 1938. Both of them, in their own way, changed the face of magic, forever. Long Live the Kings!