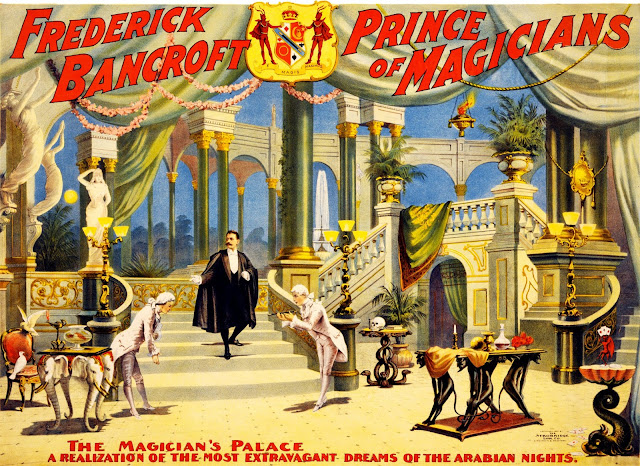 This poster above belonged to a magician named Frederick Bancroft. This poster is beautiful to be sure. And apparently it was also humongous. This was either a 28 sheet or 16 sheet poster. In other words, its a HUGE poster. I'm not even sure where you'd be able to hang such a poster. It clearly is for the side of a building. But how many buildings had free space for this monster? In 1925 this poster and another similar one were for sale at the price of 10 cents per sheet. It also came with a stand for an additional 50 cents. Imagine that.

Seeing this poster you might think that Bancroft was one of the greatest magicians to ever live. Well, let me tell you about Bancroft. His name was Frederick Bancroft.  He was born in 1866 in Winona Minnesota.  At a young age he saw Alexander Herrmann and decided he wanted to become a magician. Not only did he see Herrmann, but it appears he became a bit of a groupee following around from town to town for a period. Maybe he was more of a stalker! lol. 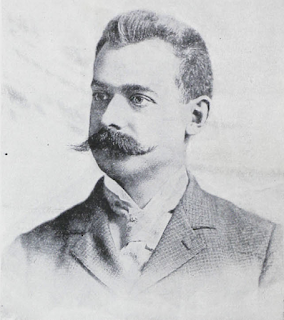 Bancrofts first foray into magic was under the name DeCastro and it was a disaster. He was an enterprising individual who got into many different businesses.* He moved to St. Paul MN. where he married and had a child. He also speculated in real estate and sold insurance. He spent $30,000 or about $777,000 in today’s money. By all accounts he had purchased top of the line posters, top of the line brochures, top of the line draperies, scenery and even hand carved tables. Almost every mention I could find of Bancroft mentioned his elaborate and beautiful stage settings. What he didn’t spend the money on however were the latest magic effects.

In 1896 Bancroft set out on his own.  The magic in his show consisted of smaller platform style magic and it was very old, one article called it hackneyed. Other seasoned performers could take the same material and make it shine but Bancroft simply did not have the strong personality that Herrmann did. Alexander Herrmann had been performing since the days of the Civil War, and had coaching in the early days from his very popular brother Compars. Bancroft struggled. He had huge a 5 part show, with 3 parts devoted to smaller magic.

Also in 1896, The Great Herrmann died. And Bancroft, being a smarter businessman than he was a magician, hired Herrmann’s agent, E.L  Bloom. Bloom helped to reshape the Bancroft Show, and I  included at least one illusion in this new version. Dr. A.M. Wilson in the Sphinx mentions that Bancroft was the inventor of The Lions Bride, using Black art. I’d never heard this before. But sure enough there is a poster of Bancrofts that advertises an illusion called LEONII, using an 'untamed lion' named Wallacker. So now Bancroft had a feature to his gigantic production!

E.L Bloom booked Bancroft into a theatre in Charleston, SC on Sept 26th, 1897. Bancroft came down with Typhoid Fever and died. Much like our friend Maro who was featured in Podcast Ep 11 he too died to Typhoid Fever.

WHAT HAPPENED TO the show following Bancrofts death? Good question. It seemed that it was acquired by Henry A. Dixey, who was managed by Edward Bloom (Bancrofts former manager). Dixey would later debut in NY in his new role as magician in early 1898. By July of 1898, Mahatma Magazine says “Henry Dixey, the comedian who succeeded the late Bancroft, as a magician, has given up magic."

Dorny said of him, “Bancroft had one of the most lavishly mounted magical shows on the road? And a very promising career was cut short by his untimely death”

You might be familiar with the story that Houdini would tell about his early years of struggling, so he sent letters to Maskelyne, Kellar, and Herrmann, inquiring about possible work with them. Well, you can add Bancroft to that list because apparently Houdini had contacted him too, according to Dr. A.M. Wilson in a Dec 1922 Sphinx magazine column.

Here is a piece also from the Sphinx,
"The spontaneous familiarity of Herrmann and the quiet yet not austere dignity of Kellar gave to their entertainments a fascination never equalled by any other magician on the American Stage. Bancroft could not follow Herrmann. Dixie could not succeed Bancroft. Thurston is not filling the place left by Kellar. Not that Bancroft, Dixie, or Thurston were and are not qualified magicians..."

So it puts into perspective the challenge of taking on someone like a Kellar or a Herrmann. Even with Bancrofts massively beautiful sets and stage decor, it wasn't enough. He did not have the personality to win over audiences. Yet at the same time, his advertisements were so grandiose that it appeared to fool someone like Houdini into thinking that Bancroft was one of the leading performers of his day.
Bancroft lasted barely two years before he died. And many people suggested that over time, Bancroft may have grown into the role that his advertisements portrayed, that of a GREAT Magician. But his premature death ended that.

*There were a couple corrections made to this article. One, originally I posted that Bancroft went into Denistry, but apparently this was not so. This is a mistake that was recorded a couple times in magic periodicals and books. I also mentioned he was born in St. Paul, MN, but he was born in Winona MN in the year 1866. He did later move to St. Paul however.