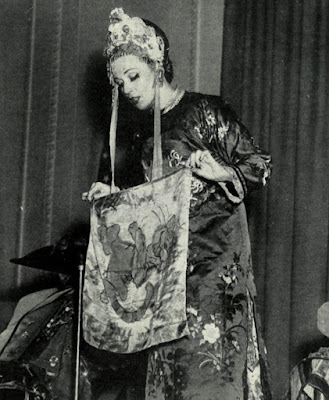 The woman who was known as LITZKA was born Pearl Beatrice Gonser, in Mt. Carmel Penn on January 11th 1901. Pearl’s mother taught voice and music and she instructed her daughter in these disciplines. Pearl also took up the harp at a young age and became quite accomplished ‘harpiste’.

In regards to her music background, she was a graduate of the Royal Conservatory of Music in Brussels, and she was the featured soloist with the Boston Symphony and the London Symphony. As a featured Harpiste, she chose the name LITZKA as her stage name. Some sources have tried to say she was born with the name Pearllitzka, or ‘Little Pearl’. But census records show her listed as simply PEARL.

The story Litza told later in life ‘was that when she was 8 years old she saw the Great Raymond perform. She then told her mother she was going to marry him some day. And sure enough in 1927 she did! Litzka became part of the Raymond Show, playing the Harp and later helping with the illusions. She was the ‘sawing in half girl’ and also presented Raymond’s version of the Substiution Trunk which he called ‘metempsychosis’. 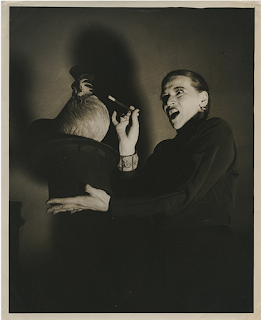 Litzka owned 5 different harps, one costing as much as $3000. She did numerous costume changes when she did her Harp act. She also had funny asides that she would throw in while she was playing various songs. The act was well structured for entertainment, but she was an exceptional harpist to boot. Litzka also began to do her own segment of magic in the Raymond show. It was a mix of asian inspired mysteries. She wore elaborate costumes and had her own unique presentations. Before long she added a trained rooster to the show. Her rooster would become more famous than her, he was called ‘China boy’ and was a bantam rooster. He did card tricks, as in finding lost playing cards. I would imagine that Liztka produced the rooster magically at the start of her act. So popular was China Boy, that he even had his own comic book, that the Raymonds used to promote and market Litzka’s act. And China Boy became a traveling companion for her as well.

In the October 1981 issue of MUM magazine, Litzka relays a story of her days traveling with the Raymond Show. She said that they had arrived at the Port of Entry for Columbia South America. Litzka always took part in verifying the contents of trunks with the local authorities. She said that usually they only looked at 3 or 4 trunks and then would issue them the permits for their stay in the country. One of the things that they did to get in good with local authorities was to do a show in the Port City at the start of the tour. On this particular day, about half of the shows trunks had been loaded into cars and were on their way to the theatre. And that is when things get bad. A British freighter, The Tritonia” caught fire. The ship was loaded with petroleum, dynamite and other explosives. A quick aside, “who thought it was a good idea to keep these items all together on the same ship?”. Anyway, pandemonium insued. The entire crew of the Tritonia abandoned ship. The dock workers packed up, but not before leaving the other half of Raymond’s show ON the docks. It had been covered with tarps, but if this ship full of explosives was to, well, explode, it could wipe out everything on the docks, as well as local businesses and even the hotel near the dock.

Please were evacuating the city. Even Raymond’s crew took off. He and Litzka stayed behind.
There were updates about ‘when’ the explosion was expected to take place. And after the last update, someone realized that the Captains, pet cat was still on board the ship! The mayor of the town even went so far as to offer a reward to anyone who would be willing to go on the ship to retrieve the cat! And as crazy as it sounds, two German sailors accepted the offer and went on board the ship. No more than 5 minutes passed before the unthinkable happened. The ship exploded, with the sailors and the cat still onboard.

The explosion was tremendous, towns people thought it was the end of the world. Parts of the ship were thrown into buildings all over the area. People hid for their lives. Litzka said she found herself hiding underneath the bed in her hotel room. Her husband, Maurice Raymond was downstairs enjoying the excitement with other hotel guests.

Much damage was done to the area. Buildings had collaped, but some escape unharmed, like the local Theatre it was untouched. The trunks from the Raymond show that had made it to the theatre, were unharmed as well. So what was the status of the other half of the show that was left on the loading docks??? When Raymond and Litzka went to check, a crowd of people were surrounding that area. It turned out that laying upon the canvas tarps, covering the remaining trunks from their show, were the remains of the two german sailors.
According to Litzka, the town was in no mood for a show, so they loaded the trunks from the docks and the trunks from the theatre into trucks, and continued on with their tour. When it came time to return a month or so later, that is when they arranged to do their show for the people of the Port City.  WOW, that is an incredible story!

Litzka performed in the Raymond show for 22 years until her husband died on Jan 27th, 1948. 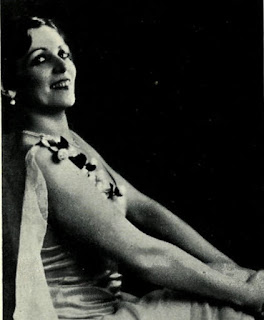 Another highlight of Litza’s career was when she became the featured performer for the Annual Fashion Show sponsored by Madamoiselle Magazine. Litzka created an entire show of magic and illusions around FASHION. She sawed models from the magazine in half, produced loads of livestock, birds, rabbits and of course China Boy. She had custom stage settings created for the event. Apparently this event was a traveling sort of show, with multiple different groups presenting shows. So Litzka had multiple sets and props created and shipped off to the various destiantions. From what I gather, she trained people to do some of the magic, but she would actually appear in person at some of the lagers of these shows. Her character for these shows was known as “Mademoiselle Magic”.

Walter Gibson, her third husband, was known to be a prolific writer and soon, Litzka would join her husband by writing books as well. She wrote “The Mystic and Occult Arts” and “ the complete illustrated book of divination and prophecy”,  a book called “How to Read Palms” and later, “The Official Know it alls Guide to Palm Reading”. Some of these books are still in circulation today.

Litzka sold the Raymond Show in 1994 to a group consisting of Mario Carrandi Jr. David Baldwin, Henry Muller and Sid Radner for $225,000.