He was born Jesse Louis Lasky on September 13th 1880. He is probably best known as one of the folks who started Paramount Pictures. However Jesse Lasky had some connections to magic which are quite interesting. But first, how did he get into show biz in the first place?

He began in his teens by performing the cornet. In 1899 he went to Nome Alaska along with many others during the gold rush. While there he continued to play the cornet in music halls and saloons. After a year he headed back to San Fransisco and teamed up with his sister Blanche and they developed a Quick Change Act. This leads to him being hired in 1902 by Leon Herrmann, the nephew of Herrmann The Great. Jesse and his sister present their act, and he also plays cornet in the show with Herrmann for a 40 week tour of the U.S.. 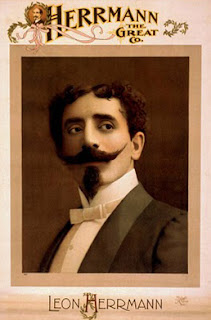 In 1904 Lasky is again hired by Herrmann but this time as manager!  As Herrmann's manager he sets up a tour of Europe and also finds other acts for the show.  The hiring of acts seems to suit Lasky and for a time he joins forces with Benjamin Albert Rolfe and together they produce a number of musical related programs for vaudeville theatres and music halls.

By 1910, Jesse takes another step deeper into vaudeville by partnering with Henry B. Harris. Together they built the Folies Bergere Theatre in Manhattan. This was a sort of a dinner and show venue but it didn't work. The venture failed for him, however the Folies Bergere theatre was later renovated into a legitimate theatre and eventually became The Helen Hayes Theatre.

Now things get really interesting. Remember Blanche, the sister who worked with Jesse doing a Quick Change Act? Well she married a fellow than Samuel Goldfish. After the Folies Bergere fails, Jesse decided to get into the new movie business and he forms a company called Jesse L Lasky Feature Play Company with Samuel Goldfish as the general manager and another fellow he had partnered with earlier by the name of Cecile B. DeMille. Oh, Samuel Goldfish would later be known as Samuel Goldwyn. This is 1913 and by 1914 they've relocated to California and have knocked out 21 movies.

In 1915 Jesse meets Adolf Zucker who owns Famous Players Studios. They merge with Lasky's company and that company would be the foundation for Paramount Pictures. Incidentally, Samuel Goldwyn and Blanche got divorced and he went off and did his OWN thing in the movie business having gained valuable knowledge working with Jesse Lasky.

Back in his early day's when managing Herrmann, Jesse Lasky partnered for a time with B.A. Rolfe. Well, Rolfe also became a movie producer and in 1918 contracted Harry Houdini to do a 15 part serial called 'The Master Mystery'. It would be Rolfe's last motion picture project as his company went out of business after this. 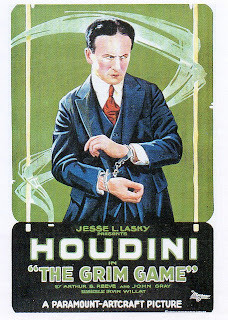 But Jesse Lasky clearly saw an opportunity and jumped on it. He grabbed Houdini away and in 1919 he was producer for probably Houdini's best movie, The Grim Game and in 1920 Terror Island.

At this point, Houdini figured he knew enough about the movie business as anyone else and he started The Houdini Picture Corporation and produced and stared in his own films. Maybe he should have stayed with Lasky because the year after Houdini died, in 1927, Lasky's production of WINGS wins the first Academy of Motion Pictures Award for Best Picture.

There is much more to Jesse L. Lasky's life in the movie business but I wanted to try and cover his relationship to magic and to do that I had to go into a little of his early movie career.

It's amazing to me how many of these early show business moguls have their start as performers and move into vaudeville and live theatre and then into the motion picture business. I'll wrap it up with a scene from the 'Jesse L Lasky presents HOUDINI in  The Grim Game'.

UPDATE: I have received a couple of comments(see below) from James Hamilton about this article and I have also talked to James personally regarding it at the 2013 Washington D.C. Magic History Symposium. I created a list of references for this article on a separate page which can be found here, http://www.themagicdetective.com/2013/12/herrmann-lasky-references.html But for the record, James Hamilton claims he was the first to uncover the Lasky-Herrmann Connection. I won't dispute this and I have no doubt that is 100% accurate. When I wrote my article, I had no idea of the work that James had put into his research. He clearly was working in a very old school fashion by talking to individuals and seeking out first hand sources. My research started simply enough by looking into the Lasky Houdini connection and then finding a reference to Herrmann along the way. There are a number of books, which have since been digitized and are available online that have this information. James Hamilton is the leading authority on Herrmann and I seriously doubt I could ever uncover anything that he hadn't already known about or heard of.  I hope that sets the record straight. I sure had no intention of stepping on anyone's toes. I found all the information in an honest straight forward fashion.