The first time I heard the name Daisy White was while watching the Houdini movie staring Paul Michael Glaser. Adrienne Barbaeu played the part of Daisy White and in the movie she worked for Hardeen in his show and then later shacked up with Houdini while he was struggling over the death of his mother. This of course is the fictionalized movie version of things. As easy as it is to become enamored with Adrienne Barbeau's portrayal of Daisy, I didn't give Daisy much thought beyond that.

Then I came across this statement "Houdini only ever loved two women, his mother and Daisy White." That's quite an eye opening statement especially given the way the legend of Houdini has been portrayed. By the way, that statement came from Maurice Zolotow, who was a show business biographer. His statement was from a review he wrote in the NY Times for the book HOUDINI: The Untold Story. By Milbourne Christopher.  Needless to say, that was all it took to cement my curiosity and send me on the search for the actual story.

Truth be told there was a real Daisy White. Her name was Gertrude Nickerson* and my research so far shows she was from Middlesex Massachusetts. She apparently got involved in musical theatre or musical comedy, probably in Vaudeville. How she got into magic initially is a bit of a mystery. She apparently worked for Servais LeRoy at some point, most likely in the 1920s. Whaley's Who's Who says that she learned magic as an assistant to Frank DuCrot and then later became a demonstrator at Martinka's Magic Shop (actually Hornmann's at the time). It's unclear though her actual path into magic as several sources give different accounts.

There are a couple interesting stories about her work at Hornmann's Magic Shop. At this time the shop was located over on West 34st St in NYC. One day Max Malini walked into the shop. There were a number of other magicians around and Daisy was working behind the counter. Max walked up to Daisy and grabbed some of her red hair and with a pair of scissors cut off the handful of her hair. The clump of hair was then vanished and her hair was found to be perfectly restored!

Another story involved a young John Scarne coming into to the shop to meet Frank DuCrot of magic lessons. Daisy was there and introduced herself and kept Scarne company until Frank arrived. No one know Scarne at the time. Frank Ducrot and John Scarne went in the back room to start their lesson and John was a little unimpressed with the technique that Frank was teaching with cards. He asked if he could learn something other than cards and Ducrot, somewhat puzzled asked if he didn't like card tricks? Scarne said he already learned a lot from professional card mechanics and proceeded to show Frank Ducrot a number of mind numbing effects. Frank was so blown away he called Daisy to the back room and they both sat there for hours watching John Scarne do effect after effect. Ducrot told Scarne that he needed to meet Houdini, and he set up a meeting for them to meet. The night of the meeting, which was also at the shop, a number of magicians were there and they all went to the back room. Frank wouldn't let Daisy come in the back though, he made her stay at the front in case any customers showed up. Typical boys club attitude.

By all accounts Daisy White exuded sex appeal, though I'm sure they didn't call it that back then. She had a habit of wearing low necked dresses and was known to lean over the counters at the magic shop while doing demonstrations revealing her ample cleavage to the customers and no doubt selling all the inventory they had! The latest book on Houdini, Masters of Mystery by Christopher Sandford, has this description of Daisy, "...Houdini's voluptuous former assistant Daisy White, whose duties had sometimes called for her to parade up and down the stage in an overfull dress while the illusionist prepared his next trick in the background." So she apparently worked for Houdini as well.

Beyond her sexy figure, Daisy was a talented individual. She was an accomplished pianist and often played piano for shows put on by the SAM Parent Assembly. She was quite active in the Parent Assembly having helped put together ladies nights and worked on decorating the banquets. In the 1930s, she was involved in a court case in which a member of the Parent Assembly acted as her lawyer. 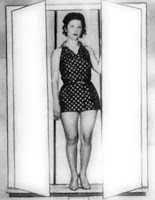 Back in the 1920s, Guy Jarrett the eccentric illusion designer, hired Frank DuCrot to present a collection of Jarrett's illusions at the Idle Hour Playhouse in NY. Daisy White was the assistant. It appears the show played a single date. But the unique illusions of Jarrett's were photographed with Daisy White in them. These photos later appeared in the pages of his incredible and controversial book on illusion magic simply titled, JARRETT.  He referred to Daisy as '118 lbs but with quite some gazangas'.

Houdini died unexpectedly in 1926.  After his death, his ever faithful wife discovered a safe in the basement containing love letters from women who had fallen for her husband over the years. Among these were some rather hot and heavy letters that came from Daisy White. Bess had a clever way of confronting the women. She invited them over her house for lunch and as they were leaving, she handed each one of them their letters back tied up nicely with a ribbon. It's unclear if Daisy was one of the invited ones. The confrontation with Daisy however seems to have been more personal. Daisy convinced Bess that nothing happened between her and Harry. This must have been the case because Daisy and Mrs. Houdini remained friends.

I had read in a number of biographies that Bess opened a tea room called 'Mrs. Houdini's Rendevous' in NYC for a period of time. The location of which was where Rockefeller Center is today. The Secret Life of Houdini by William Kalush, mentions a 'speakeasy' which was run by both Bess and Daisy White. From 1920-1933 serving alcohol was illegal in the U.S.. A 'speakeasy' was an illegal barroom. The Secret Life of Houdini goes one step further referring to the speakeasy as a brothel. This information apparently from Arthur LeRoy, but Patrick Culliton thinks and I agree, that this was a 'mischaracterization' referring to the speakeasy as a brothel. I don't honestly know if the tea room and the speakeasy were one in the same. The tea room apparently made no money because Bess wouldn't allow down on their luck performers to pay. But a speakeasy, well I can't imagine that going out of business during prohibition unless they were shut down by the authorities. No record exists of Bess or Daisy going to jail, as far as i could find, so that's not likely. It will remain an open question until I can dig further.

Next, Arthur Ford enters the picture. He was the Reverend of the First Spiritualist Church in NY. He befriended Daisy White. His charismatic charm won over Daisy and she became a spiritualist and even joined his church. On page 149 of The Houdini Code Mystery by William Rauscher there is a photo of an invitation card for a lecture being presented at Carnegie Hall by Daisy White which reads "You are cordially invited to attend a private demonstration given by courtesy of Miss Daisy White to expose the comparative virtues of Modern Magic, Mind Reading and Spiritualism". The date on the card was April 1929.

Arthur Ford apparently also won over Bess Houdini. Both The Secret Life of Houdini and The Houdini Code Mystery say that Bess & Ford were dating, though very discretely. They met after a lecture/debate on Spiritualism between Howard Thurston and Arthur Ford in which Ford easily won the debate. On February 8th of 1928, Ford gives Bess a message from Houdini's mother. Eleven months later, Ford, through his spirit contact Fletcher, produces a message from Houdini himself. Bess announced to the media it was the authentic and genuine message that she and her late husband had agreed upon.

Then all hell broke loose. The media began debunking the whole affair. Dunninger, the mentalist, got involved and pointed a finger at Daisy White saying she gave the information to Ford. One source said Daisy claimed she knew the code, as did a lot of magicians, but she did not know what the 'message was'. The United Press story that appeared in newspapers of the time said that Daisy knew Arthur Ford but "never discussed Houdini 'in that quarter or never had said she had got Houdini's code before his death." Ford also denied that Daisy had anything to do with it. However, The Secret Life of Houdini says "when some of Houdini's friends threatened to expose Daisy White's involvement, she threatened to go public with her sexual relationship with Houdini and she had 'one or more witnesses' ready to vouch for her story." Which was it really? Did she know the code? Did she give it to Ford? Did she have the affair with Houdini after-all?

To those questions, I don't have concrete answers. It's clear that history has revealed Houdini to be NOT the ultra-conservative straight laced individual that his biographers had painted him to be. Did he actually cheat on Bess or did he just have close relationships with other women? Hard to say. It's so easy to want to paint him into a modern day box and apply the loose standards of today to Houdini. Then again, there is the old saying 'boys will be boys'. We know he had some sort of relationship with other women, and pretty good chance with Daisy White as well. But beyond that we can only speculate.

Sometime in 1933 she was getting work as a numerologist. She had a business card that read 'Science of Sex and Numbers'. As I mentioned above, she gets involved in a court case over her mother's estate in Massachusetts. She eventually was awarded one half of the estate. Then after that Daisy vanishes from the magic literature.

I've been trying to track Daisy through ancestry.com and if I have the correct person, I think she died on August 6, 1993 in Athens TN, but I'm not 100% on that**. There are a number of Gertrude Nickersons and this one is the one who matches Daisy the closest, but I need further confirmation. (see note below)

That my friends is all I could find on the infamous Daisy White, so far at least. I'm going to ask a special request to my fellow magic historians. If anyone knows anything about Daisy White that I didn't cover, OR if you have photographs you'd be willing to share, please contact me at carnegiemagic@me.com
I'm going to continue the research on Ms. White and eventually hope to be able to write a much longer piece on Daisy.

*This blog has been an exciting one and new information just came in regarding Daisy White's actual name. It's from a newspaper, so I still need to verify it, but you can read it in the comments below by Bill Mullins. Very thankful for the input by others!

** As I feared the information on Daisy's death is incorrect. Houdini The Man Who Walked Through Walls by William Gresham, published in 1959 says that Daisy had already passed on though they do not give a date. So she died prior to 1959. The hunt continues.


Special Thanks to Joseph Pecore, The Conjuring Arts Research Library, Ask Alexander, Patrick Culliton, John Cox and others who shared their knowledge of Daisy White. Also extra special Thank You to Patrick Culliton for allowing me to use his photo of the real Daisy standing (upper left).
Posted by Carnegie