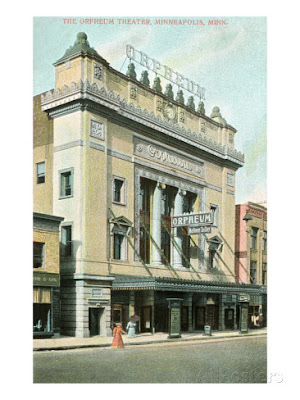 My family comes from Minneapolis. Basically, my family tree in America starts in Minneapolis and branches out from there. So, I've always been curious about Mpls. I've visited there many times, gone to the magic shops in town. I remember driving by the theaters on Hennepin Avenue years ago wondering if Houdini had performed there. Well, now I have my answers and along the way a huge shock!

Houdini's career actually begins in the other twin city St. Paul MN. In March of 1899, Houdini was working at The Palm Garden when he met Martin Beck and his career was forever changed. But his first appearance in Minneapolis (Mpls) wasn't until 1915. He was performing at the old Orpheum Theatre the week of September 26th, 1915.

On Thursday, September 30th, at 12:05pm Houdini was strapped by his ankles and hung upside down in a straitjacket in front of the Minneapolis Tribune Building on 4th and Marquette Streets. The straitjacket was furnished by the Mpls. Police department. He freed himself in front of crowd that covered on city block. For this stunt he received press articles on Sept 29, 30th and October 1st. This was one of the earliest hanging straitjacket escapes that Houdini ever presented. Possibly his second hanging straitjacket.

The evening of October 1st, Houdini would face a challenge posed by the shipping department of the New England Furniture and Carpet Company. They built a packing case that they were sure he could not escape from. In the Mpls Tribune Newspaper Houdini is quoted as saying "I do not say I will definitely get out. But I have never failed in an attempt. And tonight I will give it my best." He got out! If you want to read more about his 1915 exploits across the country, check out this link WildAboutHoudini.com

The next time Mpls would see Mr. Houdini would be in February of 1923. And this is where the whole things gets personally interesting to me. It was February 7th, 1923 and Houdini was supposed to be raised 100 feet in the air above the Tribune Annex building downtown. When he arrived, he discovered that they wanted to hang him from a sign that was only 40 or so feet off the ground and Houdini refused. He said he promised to do it from 100 feet in the air, plus with 3000+ people watching, he'd need to be up higher to be seen properly. The rigging was thus moved to a higher location. Houdini was then strapped into the Police issue straitjacket. One of the two men strapping him in was Ole Berg. This is the name of my Great Great Grandfather who lived in Mpls. for a time. Was it MY Great Great Grandfather? I have no way of knowing for sure, as I know there were several Ole Berg's in that area then. It very possibly could have been. But I'm also sure that I had other relatives present at this event. Most of my relatives lived in Mpls. or nearby during this period of time.

Following his successful escape from the straitjacket, Houdini promptly headed to the Hennipin Orpheum for a matinee performance. During this performance he featured his escape from the Water Torture Cell. The photo below was from the Mpls Tribune, but I believe he was still being raised when this photo was taken because the newspaper said he was raised up to the 5th floor window level.