"Knew Blanche Corelli very well, and it may surprise you to know that my father's first wife
was a first cousin to Compars Herrmann's first wife. Rosa Csillag. My dear old Dad and Compars Herrmann were great companions and for business reasons have never given out the facts, because they might think that at one time I was seeking publicity." The last line of this is priceless, Houdini fearing someone might think he was just out to seek publicity! lol. This is from a letter Houdini wrote to Frederick Eugene Powell.

It's hard to know where to begin. So let's just start with what I know. Blanche was born Feb 4, 1853 in Odessa Russia. She was the daughter of Compars Herrmann and his first wife Rose.  Rose Szchlig (as Houdini spelled it) sang in the Imperial Opera of Vienna, the proper spelling of her name is Rosa Csillag. Her daughter Blanche would follow in her mothers shoes and one day became an operetta vocalist.  One book I found says that 'Blanche Corelli' was actually a stage name and her real name was Blanche Crillae, though her actual real name was Maria Dorothea. She would one day live in America and have her own opera company. Eventually Blanche returned to Germany and started a family. She changed from singing in the opera to becoming one of the most well known and sought after music teachers in all of Germany.
An online search for Blanche Corelli brings up several pages where her name is mentioned either in conjunction with her Opera Company or as a music teacher. But the only place that I could find that really reveals who this woman really was is the site created by Cindy Lippincott. 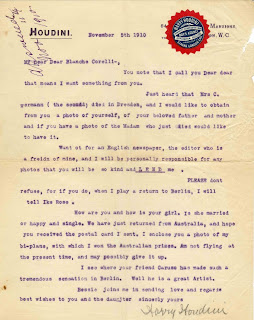 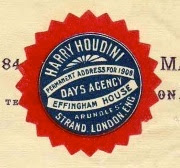