The Linking Rings, A Tricks Whose Time Has Come and Gone and Come Again! 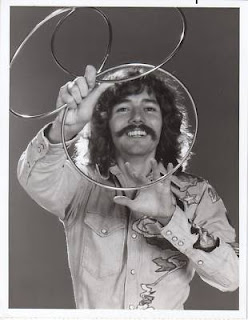 I would love to blame my sudden fascination with the Linking Ring trick on Frederick Eugene Powell, but he is only partly to blame. I was already researching this ancient mystery when I saw his video 2  weekends ago. In his routine, at the 5:50 mark on the video, he does a remarkable move where all the rings fall and cascade off of one ring onto the floor. I had read about this move before but never saw it in action. Having seen it, all I can say is WHOA! That is awesome!!!

Just so you know, I will not be revealing the methodology of this trick. I know that 90% of the people who read my blog are magicians, but I do get lay people who read it from time to time and I am from the old school, a keeper of secrets.

The trick known as the Chinese Linking Rings is said to be 2000 years old, possibly older. I am not certain of it's origins, though I have read it can be traced to Egypt and other areas of the Middle East as far back as the first century. The Annals of Conjuring mentions that it could possibly be from Ancient Rome, but it also says that evidence is slight.  And still other sources point towards India and China as the place of origin for the Linking Rings.

The trick was introduced to the European magic world via a troupe of Chinese Jugglers and Acrobats in 1830 and thus I suspect the reason the effect is known as the 'Chinese' Linking Rings.  According to the book The Annals of Conjuring, 'they were from the Court of Pekin and performed at the Savile House, #1, Leicester Square.' A number of online sources list the French conjurer Phillipe as the first magician in Europe to do the Rings after the Chinese troupe came through, but apparently, an English magician by the name of Jacobs was doing the Rings two years earlier than Phillipe. That information also comes from Annals of Conjuring.

I think it's probably safe to say we'll never know the true origin . But at least we have a good idea of when they gained popularity, in the 1800s. The early routines presented by Europeans were done with a lot of rings, 8, 10, 11, 12 and more. I'm not sure there is anyone today doing routines with large numbers of rings. About the most you'll see are six or eight, as most sets sold in magic shops come in eights. Levant, in the book Roy Benson by Starlight speculates that the reason shops started selling sets of eight rings was because Modern Magic by Professor Hoffmann contained a routine with eight and twelve. Eight was easier and less expensive to produce and thus cheaper to sell a set of eight. However, Levant says on his DVD Levent's Ultimate Guide To The Linking Rings, that magic shops probably always sold a variety of rings, from 8-12. Today however, the set seems to stay at 8 or less.

From my research on Edward Maro earlier this year I learned that he too presented the Linking Rings but he used very large rings. I suspect he was doing either Robert-Houdin's routine or one of the routines featured in Modern Magic by Professor Hoffmann.

I first learned the Rings when I was a kid. But from the research I've done over the past week, I apparently never really learned the Rings, lol. I learned a routine, but to my delight there is so much more to this little effect than meets the eye. I was surprised by the amount of magic literature that covers the rings. For example: The Robert-Houdin routine can be found in The Essential Robert-Houdin by Miracle Factory, Tarbell #4 contains a couple sweet routines, one of which was the routine of Eugene Laurant, Greater Magic by John Northern Hilliard contains several different routines, Roy Benson by Starlight by Levent has the best possible recreation of the Benson Liking Ring routine available, and there are many other sources as well. 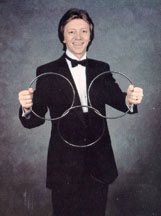 I've recently watched over a dozen routines on video including: Chris Capehart's brilliant routine, Pop Haydn's stellar 4 ring routine, Dai Vernon's Classic Symphony, Richard Ross's 3 Ring and 4 Ring award winning routines, Cellini's Silent but deadly two ring routine and many others. One of the best variations was Mike Caveney's Linking Coat Hangers.  I have watched videos by pros and by some not so pro but still well done. And I've seen a couple routines that I did not like at all. Two that I didn't like come to mind because I could tell, both performers knew how to do the rings, both had skill with the rings, but they chose to add dance and fast movements and it got difficult to follow the magic. Confusion is not magic and speed is not needed when performing the rings, in fact, the slower you go the more mysterious the illusion.

I believe my first real exposure to the rings was watching Doug Henning present them. Actually, my first true exposure was a theme park magician in Kentucky just a few months before the first Doug Henning Special. I desperately wanted to know how the trick worked so I bought a copy of The Amatuer Magician's Handbook by Henry Hay and found the secret, or so I thought. That's the great thing about magic, there is never one secret to any trick. A good effect has layers of secrets along with psychology and misdirection. Then there is the  magician who must interpret all those elements and bring something of himself/herself to the mix. One of the most beautiful routines I've seen with the rings is done by Tina Lenert. Her routine is so mysterious and magical and fun. Her's is done to music and she just captivates with her presence.

Having watched so many ring routines over the past week, I have a far better knowledge of the 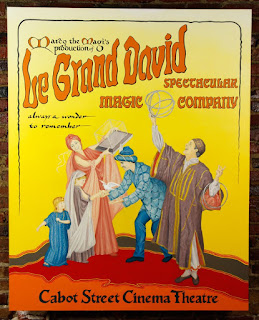 different routines. I know that David Copperfield for example was doing Richard Ross's routine on one of his old TV specials. I know that Doug Henning and my friend Cesareo Pelaez from Le Grand David both were doing Dai Vernon's Symphony of the Rings. OH, and Dai Vernon's routine seems to have been based on Cardini's routine. I can see similarities in Chris Capehart's routine to those in the smaller Ninja Ring by Shoot Ogawa.  I would surmise that Chris developed his through the school of hard work and repetition. His routine, uses only three rings and features a repetitive link that simply looks impossible. He does the link over and over, right under people's noses and still it's impossible to see how he does it. The Capehart routine has a different feel from others, almost a more direct in your face sort of approach, and I like it.

Who has the best routine? I don't think there is a definitive answer. John Northern Hillard says in Greater Magic that Chung Ling Soo's routine was the best he'd ever seen. Many magicians point to Vernon's Symphony or Pop Haydn's 4 Ring routine as their favorites. In the 1970's, I would have to say that Richard Ross dominated the field with his beautiful Linking Ring routine. There are just so many great ring routines, it's impossible to choose a 'best'. One thing is for sure, a Linking Ring routine, well constructed and well performed is just as strong today as it was in the 1830s.

On the DVD, Levent's Ultimate Guild To The Linking Rings, Levent share's Robert-Houdin's routine with 12 rings, Chung Ling Soo's 12 Ring routine, Claudius Odin's 8 Ring routine, Cardini's 6 Ring routine, Dai Vernon's 4 ring and 6 ring routines, Paul Potassy's 8 ring routine, Jack Miller's 5 ring routine, Roy Benson's 11 ring routine, Richard Ross's 4 ring routine, and several of Levent's own ring routines that he created. He does these routines perfectly and they are all a pleasure to watch. If you want to learn the Linking Rings, Levent's DVD is a must have, but it's expensive, so the merely curious will stay away. His 4 DVDs are a college course in mastering the Linking Rings. One thing that sort of surprised me was that among all the various ring moves and sleights he displays, none of the four I created are among the bunch. Now, I did not reveal mine to Levent, but I had always kind of assumed that I was likely reinventing something someone else did, but apparently that isn't the case. So, it's nice to know I've got four Linking Ring sleights that are unique! One more think on Levent's DVD, it's FANTASTIC. I found the historical information and the recreations to be just as great as the teaching segments. He always does a stellar job.

UPDATE:  I had to mention this, I just watched Jonathan Pendragon's Linking Ring routine on video. I had seen it before but forgot about it. After watching so many ring routines over the past couple weeks and watching 7 hours of rings this weekend, I must say that Jonathan's routine is among the best there is. His routine is very well constructed. It's a combination of patter and music, part of the routine he interacts with the audience, part of the routine he is on stage performing to music. And his choice of music is the perfect fit for the routine as the rings act as almost a musical instrument interacting with the music. As with anything Jonathan does, it's a very physical routine and it goes to show how a performer takes a routine and makes it their own. Just great stuff.

UPDATE2: I forgot to mention I have two friends who do the rings. But they don't really 'do the rings' They make music with their rings. They're routines are a thing of beauty and you can sense the years of dedication and practice and love in every movement. They both do similar routines but yet the end results are different. My two friends are Glenn Gary and Keith Pass, two maestros with the rings.