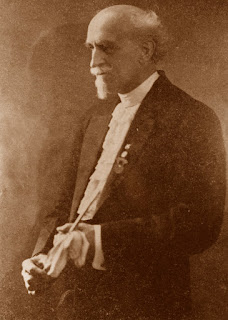 I think I have a new favorite magician. I can't help it, I get drawn into these people when I learn about their life stories. Naturally, Houdini remains #1. But I need to add another new one to the list and that is Frederick Eugene Powell. If you read yesterday's article, you've already learned that Powell was part of Houdini's Wonder Show to help promote The Man From Beyond movie. I also mentioned that Powell was part of The Triple Alliance with Servais LeRoy and Imro Fox.

I felt so fortunate to find a list of the effects he performed when he worked for Houdini. But I never imagined that there might be video footage. I mean there is precious little video footage from some of the best names from that time period let alone the last remaining 'old timer'. But there is. In his later years, Powell lived with his friend John Petrie. Apparently, Petrie filmed Powell performing. This is not just a quick 30 second piece. This video is 11.5 minutes of material. It's very poor quality, but that's to be expected. The content is there and it's breathtaking! Powell does a number of the kerchief tricks that he did at the Wonder Show, including the barehanded production of silks which then turn into a flag! He also does the Linking Rings and there are some very unusual moves in his routine. At a later date I'll write more about the 2nd Dean of The Society of American Magicians, but for now, please enjoy his magic!!!

UPDATE: Sadly, this video appears to have been taken down. Uggggh. This was one of the coolest videos I ever saw. It was on the SAM's Vimeo page. Now gone :(