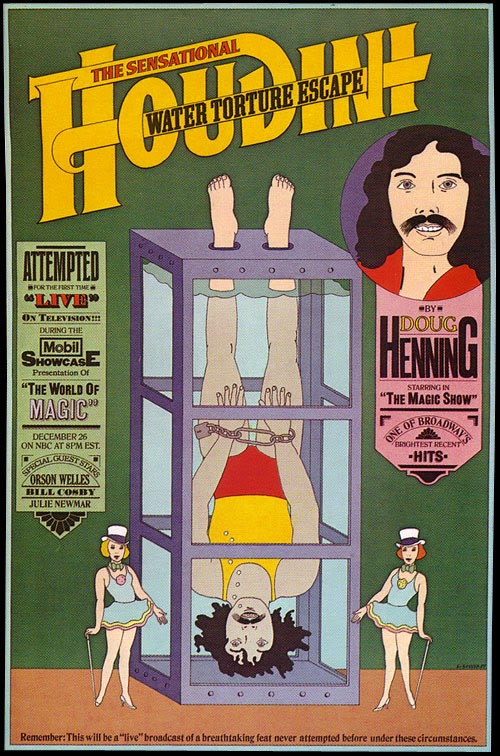 In the 1970s Doug Henning was making a name for himself, first in a show called Spellbound and then on Broadway in The Magic Show. Soon, NBC came calling and the First Annual Doug Henning's World of Magic was about to debut. The 'hook' for the show was to be the recreation of the Houdini Water Torture Cell. A very un-Doug Henning like effect really. However, according to the book Spellbound by John Harrison, the idea of the Water Torture Cell was Doug's.

The first thing to notice is the slight alteration in the look of the cell. In the Houdini Cell, only the front had glass, the other sides were wood and metal. The Henning Cell looks more like a phone booth.......(a phone booth was a tall rectangular box with glass and all sides and a door. Inside was a phone that you could use that accepted coins as payment...I figured I'd explain that to the younger readers) There was a specific reason the tank was built with glass on all sides. Doug and his crew feared the audience wouldn't have as good a view and it wouldn't look as strong on television if it only had glass on the front. But on all sides gave a great view from every angle.

The cell was built by Owen Magic in California and they actually developed the intricate mechanics to make the thing work. The reason for this, no one had a clear idea of how Houdini's Water Torture Cell worked.

Henning also chose not to present an actual escape, but rather present it as an illusion because he wanted to piece to appear more magical, according to John Harrison in Spellbound. In the escape version, the performer would be put into the cell, the entire thing covered with a cloth and eventually the performer would be free, the curtain dropped to reveal indeed no one was in the cell any longer.

No 'reward' was issued for anyone able to obtain air while hanging upside down in a tank of water. But they did make sure to promote the aspect of the escape being performed "LIVE". There is a sentence at the bottom of the poster which reads "Remember: This will be a "live" broadcast of a breathtaking feat never attempted before under these circumstances."  Interesting, except the Water Torture Cell is ALWAYS performed LIVE. It's just it was never presented on LIVE tv.

Doug Henning only performed this escape once to my knowledge. If memory serves, the Tank was later sold to illusionist Brett Daniels and then from Brett it went to escape artist Dean Gunnerson.

Below is a video of Doug Henning's performance of Houdini's Water Torture Escape.