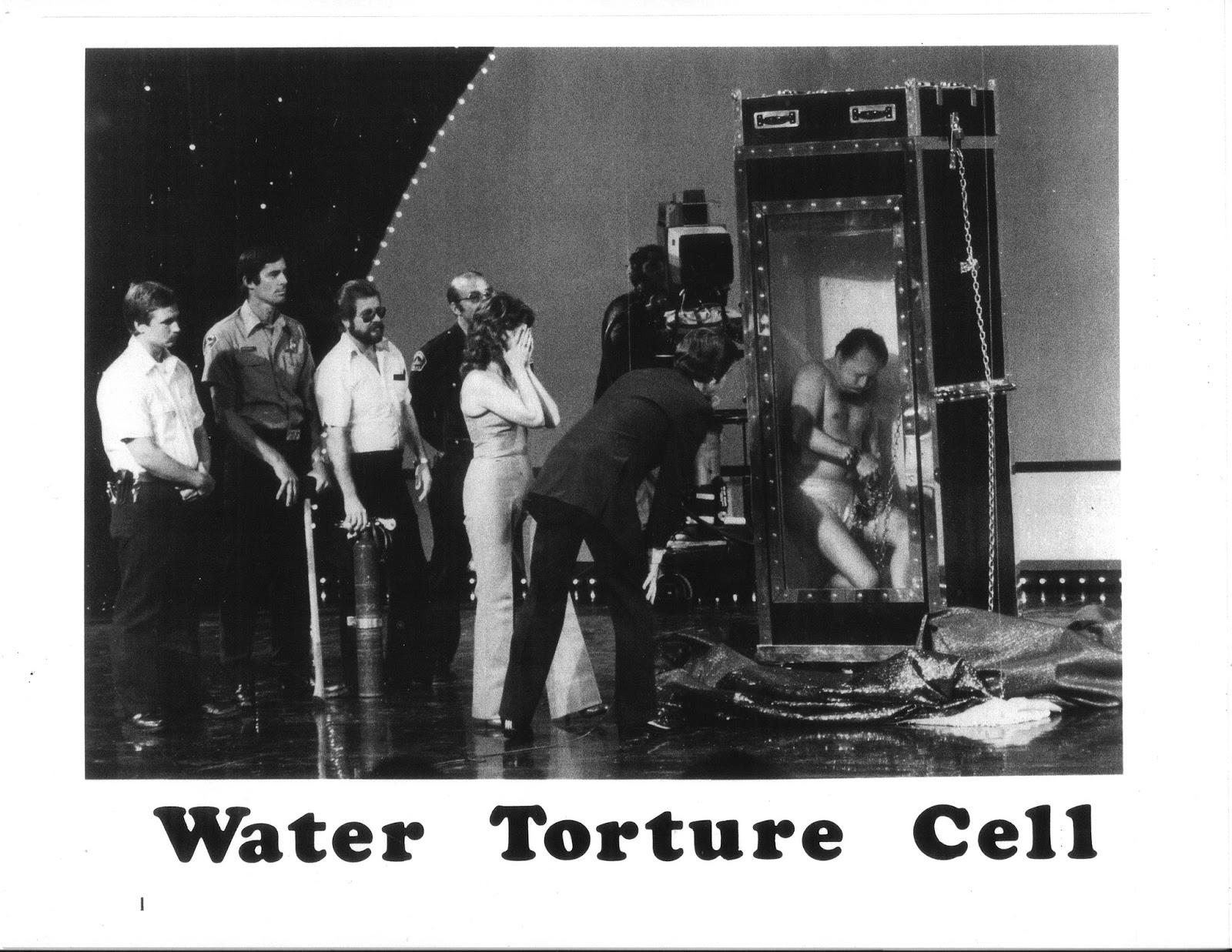 When I was a kid, I saw Steve Baker's performance of the Escape from The Water Torture Cell on TV. I don't recall if it was a rerun or if I was seeing it live.  I have had the good fortune to talk to Steve about his version of the Water Torture Cell many times. There were some features of Steve's routine that were different from the usual escape. For one, a chain held his hands to the bottom of the tank. Two, he was known to present the cell slightly differently each time he was on TV.

The first performance was on a show called Dick Clark's LIVE Wednesday Show. This was a weekly Variety Show on NBC. Steve's appearance was so impressive, that he was brought back numerous times to appear and do different escapes on the show. When the show ended and Dick Clark started another show, well he again brought over Steve Baker.

Steve told me his tank was built by John Gaughan but after he picked it up from him, he went about altering the escape methodology. Steve was very proud of his tank and his method. He would boast that no one, outside of his crew knew the method he used to escape, not even the original builder. Though, one young escape artist was up for the challenge and figured out the secret. Steve was quite taken back that his closely guarded method was figured out. The escape artist swore to never reveal it to anyone, and I haven't. :)

Steve presented the Water Torture Cell on TV several times. The first was for Dick Clark's LIVE Wednesday as mentioned above. The second was as the opening escape of an HBO Special featuring the Greatest Escape Artists in the World. Third time was below and then there was a very controversial time on Australian TV, the Don Lane Show, where Steve was trapped in the cell for real, an apparent attempt at sabatoge by a member of his own crew. Steve came out of the cell with bloody feet from trying to kick and break the top of the lid open. It took him over 6 minutes to free himself, all of his other WTC escapes were 2-3 minutes.

Sadly, today Steve's tank is gone. The whereabouts are unknown. IF anyone knows where this tank might be today, I'd surely love to know.

The video below is of one of the later presentations of the Water Torture Cell by Steve. I think this was in the early 1980s. The original WTC on Dick Clark LIVE Wednesday was around 1976.