The UnMasking of Harry Houdini Part 5

Even though Houdini is recognized as the most famous magician in history, he often gets a bad rap in the magic world. The Houdini-haters, and there are lots of them, like to say he was not a very good magician and many still hold a grudge over his book The UnMasking of Robert-Houdin. Still others dislike Houdini because they feel other magicians deserved to be remembered over Houdini, like Thurston for example. I honestly wish that other magicians were remembered by the public, along with Houdini. I was surprised at how many people had forgotten Joe Dunninger, given the fact that Dunninger was a very popular performer for years and years. Dunninger even performed on Television, which is something Houdini never got to do. But, very few remember Joe, and that is sad.

I suppose the pinnacle of acheivement for Houdini was the creation of his Water-Filled Torture Cell. 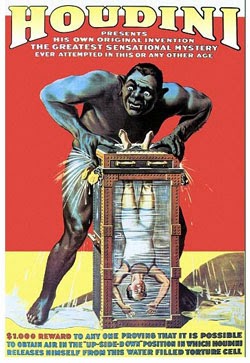 I've read that the Water Torture Cell was a combination of the Milk Can, Glass Lined box, The hanging Strait Jacket Escape, and even the Double Fold Death Defying Mystery. It all makes sense to me. Whether or not this was how Houdini developed it, I'm not really certain. But it sure looks like a logical progression.

I've written about the WTC before (by the way, Houdini referred to his escape as the USD, short for Upside Down). I'm fascinated by the WTC on many levels. It was supposed to be a death-defying feat, something for audiences to really freak out over. You want the truth? Hang upside down in a tank of water, you'll find out who is really freaking out! It takes a lot of rehearsal to get over the fear of hanging upside down in confined tank of water. And HOUDINI was the FIRST! This was his baby, his creation. Everyone, and I mean EVERYONE who has done it since Houdini was copying the master.

When the WTC was first rolled out to audiences it came with some amazing posters! Look at the graphics on these posters, they really send chills up your spine. I was just thinking, I always heard it called 'The Chinese Water Torture Cell' but looking at the posters, it doesn't ever appear to be listed that way. Rather, Water-Filled Torture Cell or simply Water Torture Cell appears most of the time. Does anyone know the origin of adding the 'Chinese' part to the title? (see comments below for answer)

Here is an interesting thing I just noticed. On several of the posters there is a $1000 Reward Notice at the bottom of the poster "To Anyone Who Can Prove It's Possible To Obtain Air In The Upside-Down Position While Under Water". However, look at the poster to the left. The reward was $200. The answer is simple enough. The poster to the left came out in 1912 and was one of the first to advertise the sensational invention. The poster above is from 1913. So obviously, Houdini and Company realized there money was safe with this 'Reward' so they upped it to $1000.

I'm working on another Water Torture Cell article for the 30 Days of Houdini which will cover Cells presented by other performers.

Finally, please check out this piece written by John Cox on the Double Fold Death Defying Mystery, as he does make a connection to that effect and the Water Torture Cell. http://www.wildabouthoudini.com/2014/07/houdinis-double-fold-death-defying.html