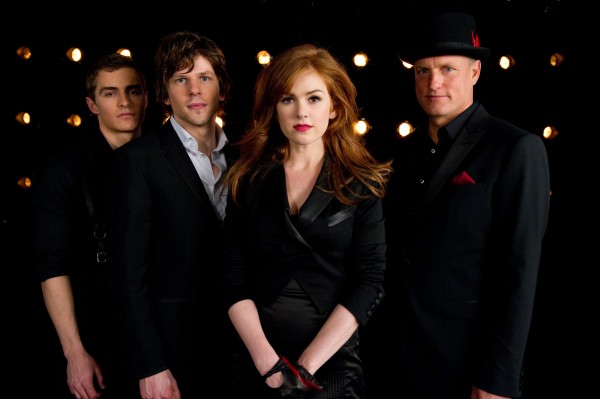 It's not often that I brag about a fictional magician, but in this case I have to brag about the portrayal of Henley Reeves by Isla Fisher in the movie Now You See Me. I should begin by stating that I have some issues when it comes to female magicians. I also have issues with kid show magicians and illusionists and escape artists and comedy magicians. It's probably more a matter of taste for me, what I like and don't like.

My number one favorite female magician working today is Alana Moehlemann. Alana is a real artist who does a fantastic job with her magic. When she performs the magic looks 100% natural for her and totally believable not to mention incredibly original. That is not always the case with some magicians, both male and female.

Another female magician I like is Angela Funovits. She also looks 100% natural and believable and it's a joy to watch her perform. I'm pretty sure Angela is also a genius because she just became a Doctor, as well as a fashion model, photographer and who knows what else. Everything she does, she does exceptionally well.

But there are some female magicians who I just don't connect with. And please don't think it's because I dislike female magicians, that is not the case. I wish there were a whole lot more and I'm encouraged to see more and more women getting into magic and establishing themselves as true artists in the field. But to me some people 'get it' and some people 'don't get it' no matter how hard they try. One of the things that bothers me are the performers who 'overdo the sexy' aspect. This goes just as much for women who are assistants as those who are the magicians. Sexy is ok, dressing like a pornstar is not.  It's not just female magicians either. Comedy magicians drive me insane because many don't get it. Many of the comedy magicians I've seen ruin the magic by exposing it for a cheap laugh. But then you see a Michael Finney, John Archer, Nick Lewin, Mac King and/or Kyle Eschen and you say, WOW now THEY GET IT! They do strong magic, totally believable and are exceptionally entertaining.

When I saw the movie Now You See Me, I did not think for one second that Henley Reeves was a 'magician's assistant'. She struck me as the archetype for female magicians. Her character was confident, in control, engaging, smart and totally believable. Isla Fisher played her perfectly. And she apparently had a pretty good coach. She studied with a real professional female magician Dorothy Dietrich. I was not aware of this when I saw the movie. But I'm certain that studying with someone who has done magic and escapes for a living made all the difference in her portrayal, as frankly, the most magical of the four magicians in the movie. According to Isla, she also studied all the video footage available on Houdini.

I can't help but wonder if there might be a Now You See Me 2 down the road.  IF there is a NYSM2, I hope Henley gets a bigger part in the movie!!! She is awesome. I can tell you that the first time I saw the movie, I went with a buddy of mine and we thought we were in the wrong theatre because it was us and 90 females! And thankfully they stayed for the whole movie and really enjoyed it. Now they might have been there for the young male stars in the movie, but I can't help think they got a charge out of Isla Fisher's role as Henley. And perhaps, Henley will inspire a new generation of females to explore the world of magic in the same way that magic movies and TV specials inspired so many of us!