The Man Who Knows 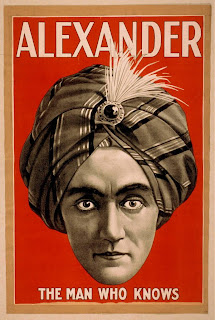 You've probably seen the posters before. The man with the unusual gaze wearing a turban. Who was he? Did he really know?

His real name was Claude Alexander Conlin (1880-1954) and he was one of the premier mind readers of all time. He was called a crystal gazer by some, a con artist by others and he admitted to killing at least four men in his lifetime.  He began his career in show business around 1902 by doing a magic act. Not just any magic act though. Part of his act was an escape act basically copied from Houdini. There were many performers ripping off Houdini at this time and work for no named escape artists was pretty thin.

He gradually added material to the show including a levitation illusion and several girls to the show. As fate would have it, one night in 1906 on his way to a show in a blizzard, his props did not arrive. Alexander the Magician was livid, there was a show to do and no props. An assistant suggested he do his mental and mind reading tricks so he collected up some bits of paper and pencils and all the small assorted things he would require to do a mind reading act. 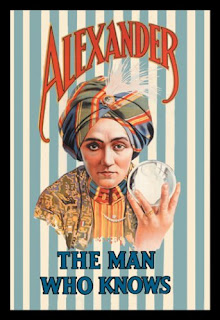 It was a huge hit and really a night that changed his life. He discovered that he did not need the enormous props and showgirls. He could do a solo act with mind reading and it actually went over better than his regular act. Alexander had been looking for something in which to make it big, and the accident of his lost luggage was a blessing in disguise.

Alexander did continue to do his escape act on occasion. A review of his escape act was covered by Leonard Hicks in the Conjurers Monthly Magazine in 1907. If you recall from a previous blog of mine, Leonard Hicks was Houdini's protege and the only man besides Dash authorized to do Houdini's act. Hicks was also the Chicago reporter for The Conjurers Monthly Magazine, which was owned and published by Houdini. Hicks's coverage of Alexander's escape act was not complimentary, but even if it had been the greatest escape act in the world, that would not be printed in a magazine run by Harry Houdini.

Alexander would not continue doing the escape act for long as he was developing into 'The Man Who Knows'. This new character was a mind reading clairvoyant who wore a robe and a turban and who sold out practically every show he did. Every night when 'Alexander The Great' was in town, people were turned away.  But in the beginning he continued to present magic and illusions in the first half of his act. The second half of the act was his mind reading.

As the years went on and Vaudeville turns were shortened due to movies, Alexander dropped the straight magic and only kept on routines that could be directly linked to his mental abilities. Along with the act he would also give private readings. Later in his career he sold items to magicians, both books and props on how he did his effects.

I've read in more than one source that Alexander made over $4 million in his lifetime. I think this would make him the highest paid entertainer of his time. During the height of his fame he retired at the age of 47. He lived to the ripe old age of 74 and he lived a very comfortable life on the money he made.

This brief description doesn't really come close to describing Alexander though. During his career his was often in trouble with the law. He escaped from jail on more than one occasion, not as part of his act but from actually being locked up by the police. He was considered a dangerous and wanted man by many policemen across the country. As stated above, he admitted to killing four men, one of them possibly the legendary Soapy Smith of Alaska.

He was a friend to Harry Kellar & Floyd Thayer but not friendly with Houdini. He was a very unique and one of a kind individual in the annals of magic history. His story is worth checking into. There have been two books written about Claude Conlin. His story is superbly covered in a book called "Alexander The Man Who Knows" by David Charvet and John Pomeroy.  There is a second biography "The Life And Times of Alexander, The Man Who Knows" by Darryl Beckmann.


I also heard that the 1937 movie "Eternally Yours" starring David Niven and Loretta Young is loosely based on the life of Alexander. I've not seen the movie so I can't say for sure. But I'll be hunting it down now to see for myself. One thing is for sure, Alexander The Man Who Knows has a life story that belongs on the silver screen!


UPDATE: According to a piece I just read by Jeff Smith on Pop Haydn's Facebook page, Alexander did not kill Soapy Smith. It was a fabrication made up by Claude Conlin.