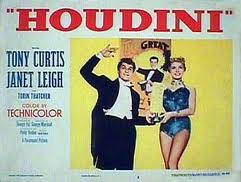 My initial interest in magic happened with this HOUDINI movie by Tony Curtis. I love all the Houdini movies (with the exception of Death Defying Acts). John Cox who has the fantastic WildAboutHoudini.com blog has written several pieces about the various Houdini movies. The first is the 1953 movie starring Houdini and John has got some great information on the making of the movie. At the very bottom of his blog are links to the other articles. He covers: The 1976 The Great Houdinis, The 1987 Young Harry Houdini, The 1998 HOUDINI by TNT, and the 1997 Fairy Tale: A True Story movie. There are two different blogs about the Paul Michael Glaser movie 'The Great Houdinis' so be sure to check them both out.


WILD ABOUT HARRY: A look back at HOUDINI (1953): "Unquestionably the most famous Houdini biopic is Paramount's 1953 HOUDINI starring Tony Curtis and Janet Leigh. It's amazing just how many ..."
Posted by Carnegie