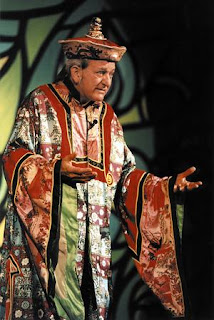 What does that mean? Well, Cesareo was a stickler for details. When you walked into the lobby of the theatre, you'd immediately be drawn into the artwork on the walls, the painted ticket booth, the giant paper mache dragons head, and you were spent any amount of time in the lobby, you'd begin to see deeper and deeper into all that was there. The ceiling tiles were all hand painted. The posters that hung in the lobby were actually paintings done by members of the company. Even the bathroom were decorated with unique designs painted onto the walls. Everywhere you looked there was something new to see.

If you ventured up the stairs, you'd be taken in by the hundreds of framed images of newspaper and magazine articles that were done on the company over the years. Once you finally made it up the stairs, you'd see more paintings on the walls and even a huge bronze sculpture which was done by Webster and David Bull's father.

Before the show even started you were overwhelmed with beautiful images. And whether you knew it or not, the show actually began the moment you walked in the door. Clowns and other characters in costume walked around, entertained and mingled with audience members. There was something happening everywhere you looked. It was breath taking.

The stage show started with a cast members entering from the back of the audience and working their way up slowly to the stage. Now you were seeing elaborate costumes and giant costumed characters. When the curtains finally opened, it was if an enormous flower was blooming as the colors from the backdrops burst forth from the stage. There was so much to see and in lesser hands the audience would not know where to focus their attention. But not at this show. Cesareo as Marco, and David as LeGrand David and all the cast members knew exactly what to do to draw focus at the right time and direct focus towards to proper action when called for. The choreography of so many people on stage was amazing. 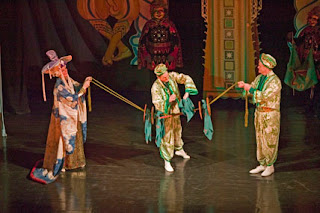 Contrast this to an average magic show that rarely uses painted scenery or any scenery for that matter, and often works against a black background. You rarely see more than one or two assistants on stage with the magician at a time and their costuming is almost never anything to write home about. In fact todays modern magic shows, the performers are wearing street clothes. Male assistants often wear all black, and some female assistants wear costumes that border on being appropriate for family audiences. Very little costuming, no theatricality, no spectacle.

I remember after 9-11 Cesareo added something new to the opening number of the show. He opened the show in silence. No music, no talking. It was an unusual way to open a show and it made a dramatic statement. I'm not sure any other show could have pulled it off, but they did.

Cesearo and his company were masters at detail, the detail of spectacle. Whether it was the ornate costumes, the incredibly beautiful backdrops and scenery, even the props which were all painted as works of art, no detail went unnoticed. It's a lesson we all should pay close attention to. It's certainly one of the first lessons I was confronted with and I took notice and have never forgotten it.

Next Article
http://deancarnegie.blogspot.com/2012/04/lgd-magic-of-spectacle-pt2.html
Posted by Carnegie