Tribute to Marco the Magi Begins 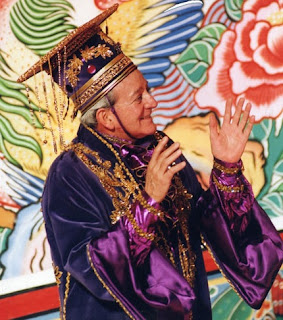 If you look above at the masthead for my blog (above), you'll see I've changed it. This is my first 'tribute masthead' and it will remain there for a while. My friend and mentor Cesareo Pelaez passed away on Houdini's birthday this year. It was just a week ago really and I still can't come to grips with his being gone. For whatever reason, for me he has not gone. I hear him in my head even now.  So over the next few days, and maybe longer, I'll be sharing random thoughts with you about my friend, about the LGD family and about things I learned from him.

His lessons, his guidance, and his kindness are with me everyday. And yes, I DO hear him, still. It's as if he has left me something to do, but I've not yet done it. There were many suggestions Cesareo gave me over the years. I listened to them all and went after many. Some I did not accomplish and others I still plan to do. One right now that sticks in my mind is a book that he suggested I write. But I know Cesareo would not want me to write a book in his words, but to use my creativity to explore the subject. Unfortunately, he did not know, I wrote it. Actually, I wrote the first one, of many. The first version is a children's book which features a young Marco the Magi as a boy. Marco the Magi was the character Cesareo played on stage. The story is part fiction and part truth. I pulled elements from his life story and put them together to write this story.

The one delay was that I had not illustrated the story yet. I did not want to illustrate it all, only a couple pages and then bring it to him to review. Now, however, he will watch over me as I work on the illustrations.

But that is not the task he has left me. I'm not totally sure what it is, but I have a good idea.

Next article: The Magic of Spectacle
http://deancarnegie.blogspot.com/2012/04/lgd-magic-of-spectacle-pt1.html
Posted by Carnegie