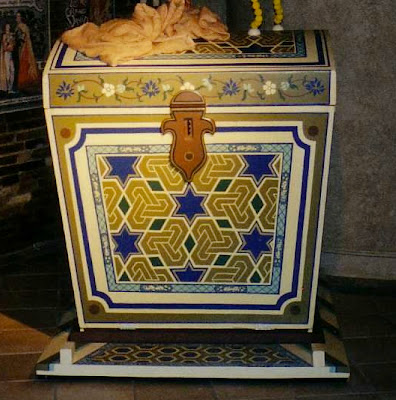 I wanted to share with you a couple of photos that show the kind of thought and detail that went into the decorating of the props used in the show. Please keep in mind, that some of the smaller props they used in the show were purchased, other props were built from scratch. But no matter which way they got the props, they all went through the Cesareo decorating process.

The illusion pictured above is HUGE. I think it stands 5ft tall to give you an idea of scale. I was never fortunate enough to see it used in the show, so I am not even certain what it is. I have a feeling it's some sort of tip over trunk illusion. But regardless of what the prop does, it's the way the prop is decorated that I want to point out. You might think they all of their props are red and black with painted dragons, WRONG you are. This piece above is simply a work of art. The design on the front is incredible. The same design is repeated on the sides and the back. IF you look at the base of the prop, you can clearly see a similar design repeated. Let's face it, they could have easily just painted the base a solid color, but they did not go that route. The design is also repeated on the curved lid, which I honestly didn't even notice myself until just now. And then there is the flowered decoration on part of the lid. It's just another detail that takes this prop from ordinary to extraordinary! 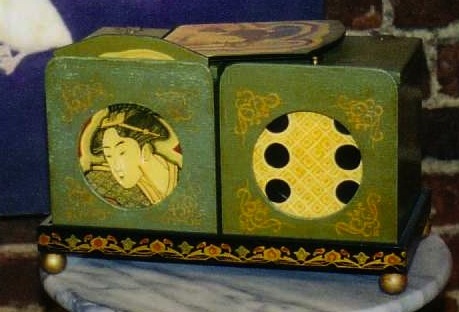 The next prop is a smaller piece, a Die Box. 90% of the detailed paint work on this prop is going to be lost on the audience, but did that matter? No. Look closely at this prop and you can see the care and patience that had to go into painting it. BTW, these are not decals you're looking at. The detailed work on this prop was all hand painted. It's breathtaking if you think about it. 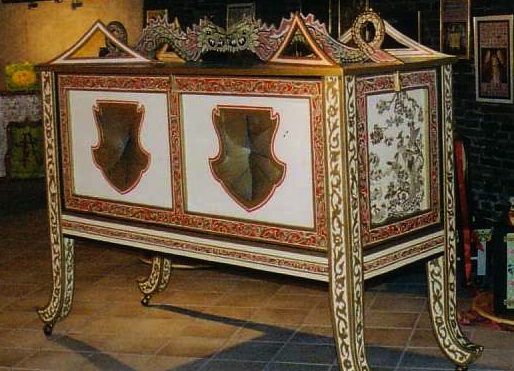 This final piece is a very large illusion known as 'Noah's Ark' or sometimes just as 'The Ark'. It's an illusion that has fallen out of favor. It was popular in the Vaudeville days and I know that Harry Blackstone Sr. presented a version of it as did many other performers. The effect was that the front and back doors of the prop were opened to show it empty, and then they were closed. At this point the magician would reach through the openings in the front of the box and pull out livestock, chickens, ducks and other such animals. Eventually, after numerous livestock had been produced, the doors were again opened and a female was seen reclining inside the box! Most of these things were decorated to look like Noah's Ark, so they had a wood grain finish or natural finish if you will.  Wood grain would not fit within the scheme of all the other props in the LeGrand David Show, so this prop got the special 1-2-3 Cesareo signature style applied to it. Keep in mind, the kind of design that is on this illusion isn't going to be listed among a set of workshop plans. Cesareo and the members of the company would have had to come up with the design first, draw it on there and then hand paint it! And this prop has DRAGONS! Look at the top and you'll see two ornate dragons that stretch from one side to the other meeting in the middle of the box. As I said before, not so much a paint job as it is a work of art! But it was this kind of work that was the signature of the members of this show. It was this kind of care that went into everything they did. When you step back and really examine the amount of effort that went into each and every prop,  you begin to understand that this was not just a magic show but it was a labor of love for everyone involved.

Next Article
http://deancarnegie.blogspot.com/2012/04/lgd-marketing-from-golden-age-of-magic.html
Posted by Carnegie