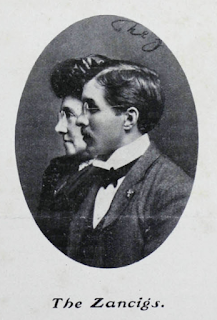 The Zancigs were probably the first mind reading couple to make a name for themselves internationally. Granted, Robert Heller and Haidee Heller did raise a few eyebrows in their day, but they didn't have the impact of the Zancigs, nor did they tour as much.

Their Real names were Julius Jorgensen, born in Copenhagen, Denmark March 7th, 1857
His partner was born Agnes Clausen, also in Copenhagen, Denmark in 1849.
Julius moved to the US in 1882 and a short time after he arrived, he met up with Agnes at a social gathering of Danish people who had immigrated to the US. They had known each other in Denmark and here upon meeting, they struck up a new relationship which eventually led to marriage. 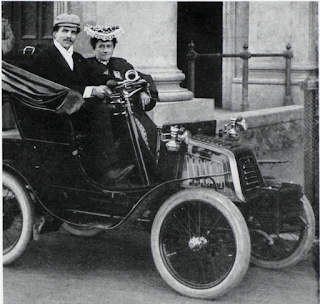 When he was living in Denmark his father had him apprenticed in the iron smelting industry. So when he came to America, this was one of his first jobs. While still employed in the iron plant,  an unusual request came to the young couple to perform at a church function. Because they didnt play any sort of instrument, they decided to try their hand at telepathy. Yeah, that makes sense. I can’t play an insturment, so I’ll read minds instead, lol. I’m going to guess that at some point Julius may have had an interest in this subject or picked up some of the expose pamphlets on how this was done. They began with the work that Robert Heller had done with his Second Site Act and expanded upon it. At any rate, they gave their crude demonstration and were surprised at how well it went over.

According to Will Goldston’s book, Sensational Tales of Mystery Men, Zancig had an accident at the smelting plant, he badly burned his hand and was out of work for a long while. During his recovery, he decided that he would leave the iron works plant and try his fate in the world of mind reading.

According to numerous sources, Their career began in 1899, when they start to present their telepathy act at San Souci Amusement Park in Chicago IL. This is even confirmed by a short article about them in a Mahatma Magazine in 1902.  Sensational Tales of Mystery Men, has them at Coney Island and claims that Horace Goldin discovered them there and later introduced them to Oscar Hammerstein.  I have a feeling Coney Island is incorrect, but it’s possible Goldin saw them at San Souci Park. And the Oscar Hammerstein connection is correct. He brought them to NYC to play his Roof Garden at $400 a week. The couple also performed at countless private functions for the high society of NYC. LONG before Steve Cohen took up residency at The Waldorf Astoria, The Zancigs performed there for 12 weeks.

In 1903 they met H.B. Leavitt, a theatrical producer who organized a Globe trotting tour for them.  And indeed they did travel the Globe. Arriving in London at one point they soon became a sensation.

In 1906, The Zancigs gave a command performance before King Edward VII at Buckingham Palace. After this they toured across England as they had done before and again, the sensation continued. In the book, Illusion Show by David Bamberg, he talks about his family running into the Zancigs on a train in Norway. Agnes asked Okito if the young son, David, was going to follow in his footsteps. Because if he wasn’t she could make a ‘mind reader’ out of him. Remember that anecdote…

Here is a write-up from The Sphinx Magazine in 1906 of their act. “The Mysterious Zancigs were a strong feature of the Orpheum the week of Nov 6th. Their act is certainly a great one in every sense. They work rapidly and accurately in all their tests and are never baffled by any of the attempts made by the audience to fool them. Their exhibition may be termed telepathy, mind-reading, second sight, or by any other name. It goes just the same. Mr. & Mrs. Zancig honored the Sphinx with their presence, and during their call favored us with a private exhibition of their extraordinary powers. While this gifted couple were visiting Mammoth Cave recently, they had one pleasure of giving an entertainment in the bridal chamber of that wonderful cave”

Mammoth Cave is a National Park and Cave in Kentucky. One of the areas is called the Bridal Alter or Bridal Chamber and it was here in 1906 that the Zancigs gave an impromptu performance.

In a 1906 issue of The Conjurers Monthly magazine, Houdini writes about the Zancigs, “Their act is about the best of it’s kind that we have ever seen, and we have seen almost all!”

In 1907 they were hired to work at the Victoria Roof Garden. They had an extended run that went into 1908 with the amazing salary of $1500 per week, the most ever paid to a mind reading act at the time.  From there they went to the Alhambra for a seven month run, then off to the Wintergarten in Germany.  Then back to America before the year was up.

IN 1910, they were requested to return to England and Buckingham Palace to perform again, this time during the coronation of King George V. They remained in England until 1913, when they finally returned to the US.

This is just the early part of their career. On The Magic Detective podcast Ep 21, I go over the entire life story of the couple and those performers who joined the show later. Here is the link to episode 21 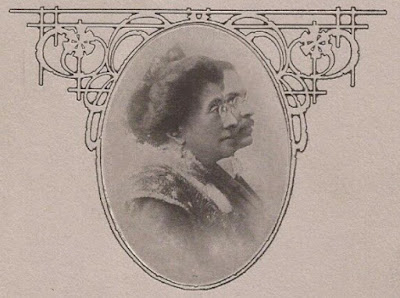