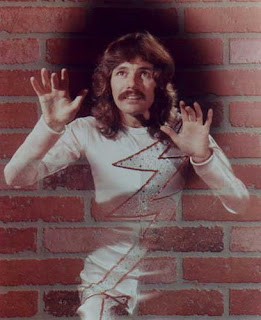 Friday May 3rd marks another birthday for Doug Henning. Had he lived, he would be turning 72, and no doubt would be the spitting image of Merlin himself! On Friday, my second podcast on Doug Henning debuts on https://magicdetectivepodcast.com, it is Episode 20. Basically on this podcast I do a run down of the World of Magic Specials 5-8. I give a list of tricks and a few other details from the specials. There is something that I mention during the podcast, that I have talked about before and I'd like to mention it again. The 8 World of Magic TV Specials, though wonderful to those of us who experienced them as they happened, may not hold up well for newer generations. They likely seem corny, over produced, campy, even goofy. It was a different time for sure. But I also point out that even though I loved the specials they failed to capture Doug at his best. What does that mean?

To see Doug Henning LIVE was much different that the TVspecials. Gone were the corny jokes and the poorly written patter. Instead, what you have is a very confident performer who is genuinely funny, energetic, enthusiastic, and HAPPY to be in front of an audience. I never in all my years heard anyone say that "Doug Henning phoned in a performance, or walked through a performance". He was engaged and in touch with every audience he performed for. And amazingly, I found proof of what I speak.

On Youtube there is a video that someone shot of Doug performing LIVE in Omaha Nebraska sometime in the 1980s. Yes, he is wearing his signature overalls, but that was HIS style for the time. But the magic is rock solid, the entertainment is fantastic. Listen to how the audience responds to his various lines and quips. He is a master showman without question. Please take a few moments to enjoy the magic of Doug Henning!