The Magic Detective Year in Review 2017

2017 is almost finished. I'm going to take a few moments and feature the highlights from my blog and mention some other Magic Detective highlights as well.

First, I must confess to thinking that I was a bit slower on getting out articles this year than previous years. But after looking over last years numbers I was pleasantly surprised. 2016 saw 43 articles. 2017 saw a whopping 65 articles! For the record, I didn't look back any further because I know that some years I was a magic history fiend and spent more time blogging than working, lol.

If I'm going in chronological order, the first big event for The Magic Detective was the TEDx Talk in

April. This was so much fun, and I might have been the first person to speak about magic history at a TED event. I will confess, the talk was not exactly what I wanted, however, it is exactly what THEY wanted. Try covering all of magic history in 5 minutes, lol. I had a total of 8, five minutes for talk, 3 for a trick, because, yes, they wanted MAGIC too. And I'm not complaining, I loved every second of it. I totally loved the challenge and was honored to be asked to speak. It was great fun and I'd love to do it again.

A TED Talk might be the highlight of anyone's day, but not the Magic Detective. Nope. My assistant 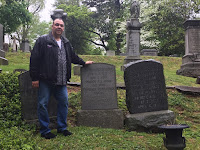 and I left the Lisner Auditorium and headed straight for an old Cemetery in Washington D.C. to search for the grave of one of the early magic historians, Henry Ridgely Evans. It was no small feat and frankly dangerous. It was raining and the terrain made it very slippery. But we eventually found the grave! You can read about our trek on the link. 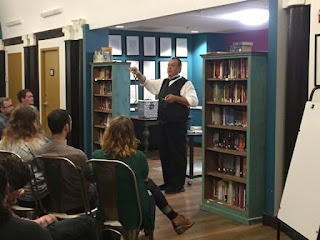 I quickly followed up the TEDx Talk with another gig with the folks at AtlasObscura.com. This time it was Houdini Takes DC and again, I was joined by fellow magic historian Ken Trombly. Ken has an incredible Houdini collection, posters, photos, playbills, it's truly remarkable. Ken spoke first for about 40 minutes. Then I was supposed to follow with a Houdini style magic show. However, I changed things on a dime. There were so many areas of information to fill in from Ken's talk, that I began speaking about Houdini and sharing additional stories. Then along the way I shared some routines. For example, Ken had displayed Houdini's King of Cards Poster, so I started my presentation with a Card Trick right out of Houdini's notes. Later, when I got into Houdini's Handcuff escapes, I demonstrated a handcuff escape. Near the end I spoke about two people who were influential in Houdini's life, Abraham Lincoln and Harry Cooke. I then demonstrated a Rope Escape that Harry Cooke presented before Lincoln himself.  The attendees loved it!

One of my favorite articles of 2017 was an Expose of Houdini's Card Act. I wish I had done this research before the AtlasObscura event the previous month, because I might have presented Houdini's Card act there. But as it was, I was not totally aware of what his act consisted of. There were tidbits of info all over in books, articles and such. I gathered them, and did additional research and put out a great piece.

And though this is somewhat out of order, another favorite article for 2017 was about Houdini at The Wintergarten. There are times when the research gets so consuming that I actually feel like I've been to these places. Most of the research on the Wintergarten didn't even make it into the article. The reason was because most of the research was about the venue, how it came about, what eventually happened to it, and the circumstances in Germany during the time all this took place. When I finally finished this article, for weeks after, I had this feeling as if I had truly been to Germany and experienced this entire event in history. Like I said, consuming. 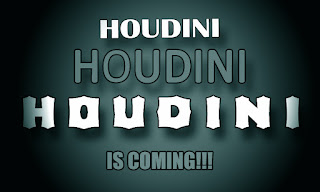 The number of blog articles for 2017 would not have been so high had it not been for Houdini. The Houdini Month series this year really took me over the top. And there was some good stuff during that month. Some of my favorite articles from Houdini Month include : The King Breakers, The Ghost Houses, Houdini in Baltimore (my home town), Queen Victoria's Dress, and The Escape Revelation, which I had to sit on for YEARS before I was allowed to reveal it. I had a HUGE spike in readership in October because of Houdini month, though not as big as the first Houdini Month back in 2014. Sadly, HoudiniMonth didn't rate a mention on The Wild About Houdini Year in Review, so I'll have to try harder next year! (CORRECTION: I have been added to WildAboutHoudini Year in Review!!! Hey, how John Cox keeps up with all that stuff is beyond me. He is AMAZING! His Houdini Year in Review is spectacular and I encourage you to check it out!) And the truth is, the Houdini Month that appeared on this blog was NOTHING like I had planned. What I had been working on was going to be monumental, but LIFE stepped in the way and thwarted those grandiose plans....but who knows what the future might hold?

The most difficult moment for The Magic Detective this year was having to report on the death of my friend Steve Baker. It was also the most read article of the year, and deservedly so. Steve was a great entertainer and a controversial figure in entertainment. He had a stellar career up to a point and then things went awry. He always intended to make a come-back, but despite his best efforts it was never to be. His health deteriorated near the end and as he said to me many times, "If I knew I was going to live this long I would have taken better care of myself." A lesson to us all.

If I'm going to be honest, the biggest Houdini Event of the year, was not on my blog. It was over on John Cox's blog, WildAboutHoudini.com when he covered his visit to Houdini's home in NYC. Reading that article was memorizing, and the only thing that could have made it better, would have been to be there. But my performing schedule would not allow it so I missed out (and have regretted it every day since).

What is in store for 2018. Oh man, if I could only tell you? Big things ahead for magic history and for The Magic Detective. I'll tip you off early in 2018 as to some of the big things, so keep watching, keep reading, and please feel free to leave comments any time!
Posted by Carnegie