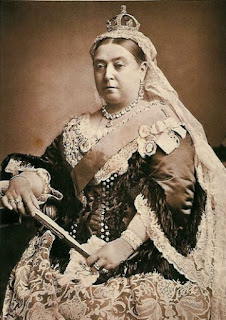 I sure named this blog correctly when I called it, TheMagicDetective. I never know what rabbit hole I'm going to have to go down and how much searching and detective work I'll need to do. As my fellow Houdini bloggers know, the slightest thought can take you places you never expected. Today, we look at Queen Victoria, specifically, her dress.

Queen Victoria reigned over the British Empire for 64 years. She died, coincidentally enough on Bess Houdini's Birthday Jan 22, 1901. According to the Kellock biography, Houdini His Life Story, Houdini, who was in London at the time, saw a dress, designed for Queen Victoria, in a shop window. The Queen died before taking possession of the dress however.  Houdini wanted the dress for his mother, who he thought was the same size as the Queen. (really? I don't think so, she had a size 43 waist!) He went into the shop and at first the shop keeper did not want to sell the dress. According to the Kellock biography, "one did not sell her Majesty's relics." But Houdini was persistent and explained the dress would be for his mother. The shop keeper eventually agreed to sell the dress on the condition that it would never be worn by anyone in Great Britain. Kellock says the dress sold for 50 pounds, though the Christopher book, Houdini-The Untold Story has it at 30 pounds, and the newest book by Derek Tait, The Great Houdini His British Tours, also has the dress listed at 30 pounds. Christopher adds this was approx. $150 (at least in 1969). 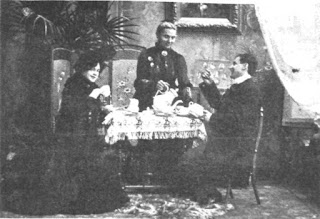 For a long time I thought this story was simply a fable. It sounds like something Houdini might make up. But the story is true.

I believe Cecilia Weiss is wearing the dress in the photo to the left. This picture appeared on the
November 1902 issue of Mahatma Magazine on the cover. Within the text it reads "this photograph was taken in Essen Ruhr, Germany, in May 1901, during the visit of Houdini's mother, who came all the way from America to share the triumphs of her son." That makes this the precise time when Houdini would have given the dress to his mother.

Pat Culliton, in his fine book, Houdini The Key, has a photo that he believes could be the dress. And it's similar to this one, at least in black and white it looks similar but it's not the same dress. The one similarity is that Cecilia is wearing the circular brooch around her neck with Houdini's picture in it, in both photos.

The only reason I don't think it's the dress is because it appears to be a little too stylish for the Queen. She was known to wear rather drab styles at this point in her life.

One of the curiosities I had about the dress was the color. I imagined a midnight blue or even deep purple perhaps. Then I found out this bit of information. When Prince Albert died in 1861, Queen Victoria went into mourning and wore black clothing. She continued to wear only black until the day she died. There were dresses that contained accents of white, so again, it makes Pat's suggestion still plausible. The photo at the top of the page was a dress for her Diamond Jubilee and it contains a great deal of white, more than is usually seen in her dresses, but this was also for a special occasion.

Queen Victoria was a big woman, Cecilia Weiss was not. There is another photo of the dress that I think is the one, and you'll notice the amount of extra fabric. Now, I did read that Bess helped to alter the dress to fit Houdini's mother. IF you look at the photo to the left, it's the same dress that is in the photo from the cover of Mahatma. You can tell the dress has lots of extra fabric, but also fits Cecilia around the waist. I think that is Queen Victoria's dress! (ed.note: This photo comes from Houdini: A Mind In Chains, and the caption reads "Queen Victoria's Dress, Essen, Germany 1901" so that confirms it!*)

This now brings me to the whole reason I started this quest. I wanted to know, a. if the story was true, then b.  where was the dress today. If it truly was Queen Victoria's dress then it must have survived. I wondered if Bess got it. In the movie, The Great Houdini's with Paul Michael Glaser and Sally Struthers, Harry asks Bess what she wants, and she replies quite emphatically, "Queen Victoria's Dress!" But I don't think this moment actually occurred in real life due to the next bit of information.

This information came from Harry Hardeen to Jon Oliver to John Hinson, then to me. So I'd say it's pretty accurate. The location of the dress today....Cecilia Weiss was buried in Queen Victoria's dress.
And to add just one more bit of trivia, Cecilia was also buried with a pair of slippers that Houdini purchased in Bremen. When Houdini was leaving on July 8th for Europe, his mother asked him 'to bring back a pair of the warm woolen house slippers'. This according to HOUDINI His Life Story by Harold Kellock.  Houdini stopped on his return voyage to specifically pick up the slippers and be sure she was buried with them.


*Special thanks to John Cox for helping me find the final photo of the dress. Also, thanks to Joe Notoro who first posted this image on his blog, The caption, confirmed what I was thinking!!! Also thank you to John Hinson and Jon Oliver for getting me the info on the final destination of the dress!
Posted by Carnegie