Houdini and His Ghost Houses 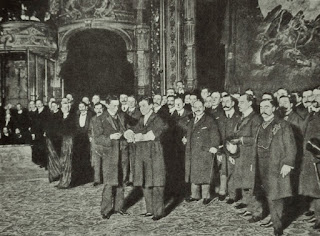 Houdini and ghosts are connected by way of the spirit mediums, spirit photography and all things associated with the haunted genre. But there is another connection. Something he traveled with and relied upon for years. That something was called his 'ghost house'.

The ghost house was the small cabinet he would often use to escape from handcuffs. He would kneel inside the house and it prevented people from seeing exactly what he was doing, but wasn't so large so as to hide an accomplice who could secretly let Houdini free.

The first mention of the 'ghost house' in a Houdini bio would be in the Kellock biography, when he describes the Mirror Handcuff Challenge. But I think perhaps one of the best descriptions comes from the more recent biography, The Secret Life of Houdini by William Kalush and Larry Sloman. They describe an event that took place June 27th, 1900 in London and the report comes directly from Inspector Melville's Diary. The event took place at the Alhambra, and the manager Dundas Slater had invited and encouraged members of the press to come and bring their own restraints to try and defy Houdini. I'll spare you the various details of his escapes however, this is how the ghost house is described, "a small waist high enclosure consisting of metal piping and black fabric that hid Houdini on three sides and could shield him totally by drawing a curtain in the front." This quote says the 'ghost house' was made of black fabric. However, Pat Culliton mentioned that he thought the 'ghost house' was red. I also found reference to the red fabric in the book, The Great Houdini by Derek Tait.

In a newspaper article from The Pittsburgh Daily Post May 19th, 1907, a reporter says to Houdini, "the secret in your powers lies in the fact that you are probably the most expert locksmith in the world, does it not?" Houdini answered, "Practically yes, but not entirely. I can open the ordinary handcuff by simply rapping on the floor. I understand the mechanism so thoroughly that I know exactly how to tap it to make it open. For such easy tricks, I don't mind for the spectators to watch me. It is when I have something particularly difficult to perform that I retire to my 'ghost house' to preserve my secret."

There is an interesting article in a Sept 26th 1906 article from The Washington Times that describes a challenge Houdini faced by escaping from a packing crate on stage. According to the article, the ghost house was placed over the top of the crate and then he began his escape. Later, the article mentions the 'red curtain' obscuring the box from view. This account makes me think that perhaps in this case, it was not his ghost house, but rather another fabric cabinet of a larger size, like the curtained cabinet for the Metamorphosis for example.

A similar escape from a Paper Bag also describes Houdini's ghost house, but again, I think this was a larger version again. In the Silverman book, there is a description of the Milk Can escape, and again they mention bringing in the ghost house to cover the can.

I believe that Houdini called all his cloth cabinets 'ghost houses', as a throwback to the old spirit cabinets that mediums used. A Spirit Cabinet began with the Davenport Brothers as a large wooden cabinet, usually several feet off the ground on saw horses or mounted on 4 legs. Over time it was replaced with a large curtained cabinet. But the use was the same, this is where the mediums would do all their dirty work to cause various supposed manifestations of spirits. Houdini was using it for a different sort of dirty work, to escape. And I believe he had more than one. The small fabric cabinet for handcuff challenges. And then the larger red ghost house for the Milk Can, and any challenge where he would require more room, or more space. I also believe these ghost houses were likely gaffed to the hilt, to use magic jargon. The larger red ghost house may have even had a roof on it to prevent folks in the balcony looking down into the cabinet. Either that or it could have been quite tall, but I'll bet it just had a covering/roof.

Sadly, I do know if any of the ghost cabinets survive today. My guess is they do not. The only picture I know if is the one above of the Mirror Challenge that just happens to have the small ghost cabinet in the picture.

UPDATE: I can't believe I missed this initially. Houdini's Escapes and Magic by Walter Gibson actually has a chapter on Houdini's Cabinets. The first thing I read really stands out, "The cabinet must not only be unsuspicious in appearance; it must stand an examination by committee members, who go through it before the escape takes place." YES!!! Besides being easily portable, easy to construct, they also had a perfect innocence to them, at least in their appearance. Forgive me, as I do not like to give out secrets here, so I will be stopping short before I give away too much. I will add though, that Houdini described several different cabinets, some were quite elaborate and it doesn't look as if he ever constructed the more elaborate cabinets. What he had worked for what he needed.
Posted by Carnegie