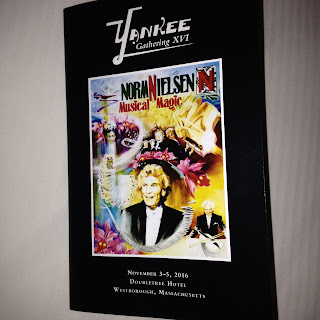 The Yankee Gathering 2016 is now over, and I'm finally home and have a few moments to reflect on events of the conference. I guess my first thought is, 'WOW'. What an incredible time we had. Usually at magic conventions you spend a lot of time in the dealers room when there are no activities. But I barely spent any time in the dealers room. In fact, Denise and I had to make a special trip on Saturday INTO the dealers room because we missed so much...and then we still did not get to stop by every booth. There were also a lot of people I didn't get to chat with or introduce myself too. Some of them, honestly, I didn't know where present otherwise I would have searched them out. One person comes to mind, Kevin Connolly. I really would like to have met him and said hello, but I didn't know he was there, my guess is he was probably in the dealers room and we just never made it over to his booth. Also, I did catch out of the corner of my eye, Arthur Moses, but I never saw him alone where I could go up and say hello. 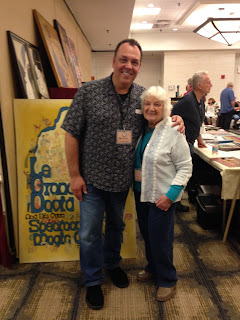 But let me focus on the folks I did meet. Adele Friel Rhindress, who I already knew but spent quite a bit of time with during the conference. Gary Frank, who I purchased my Kellar poster from earlier in the year but this was the first time I got to meet him in person. Magic Christian from Austria who was a charming gentleman. John Hinson, who I also previously met and it was great to see him again. David Haversat, who I met at the registration booth, but didn't really get to talk to. He was usually in conversation or I was. Kent Cummins who I believe I had met once before and who was a good friend of one of my good friends. so it was great to reconnect with Kent. Judge Gary Brown, who is funny, and clever, and quite the magical inventor as well as being a great guy.  Gary Hughes, it was great to see him again, always nice to see him and talk magic history. William Rausher, who I had met briefly once before but it was nice to see him again. Oh, my friend James Hamilton, the authority on all thing Herrmann was there. I got to meet Thomas Blacke who I first learned about from the late Norman Bigelow. Rick Heath, the artist from Le Grand David was there and we went to dinner on the first night, always great to see Rick. David Bull from Le Grand David stopped us in the hall to chat for a while which was very nice. Lupe and Norm Nielsen who I've met before but it's always nice to see them. I got to meet Ray Ricard, the fellow who invited me to lecture and who has a tremendous book collection. It was also great to see Alan Wassilak again, we had met a couple years ago at Ray Goulet's Magic Shop. OH and of course, I enjoyed chatting with Ray again as well. Charles Greene, who lives in my area but I only ever see at these history conferences. John Bundy and Morgan were there and I finally got to meet them after all these years. I sold them an illusion about 10 years ago and they still remembered it. David Oliver was there and we spent quite a bit of time chatting with him, he is quite the individual. Tim Moore, the dentist and collector from Columbus, what a great guy and so nice to finally meet him. I also spoke for several minutes with Mike Caveney and got to meet Bill Smith as well. And I got to see Bill Schmeelk again from Wellington Enterprises, nice to see him again.

I'm sure there were people I met that I left off the list above and please forgive me if I did. You might just get mentioned in a future article. Denise and I left the Yankee Gathering for another conference that was even more intense than our 4 days in the Boston area. I'm still not caught up on my sleep.

Apparently the Yankee Gathering events always have a guest of honor, and this year it was Norm and 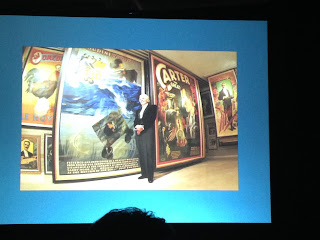 Lupe Nielsen. Norm was given an award and Lupe spoke about their incredible poster collection. She told how it first began, some of the rare gems in the collection, and how they went about deciding to sell the collection.

Lupe brought along a power point presentation filled with incredible images of posters. There are over 2000 posters in their collection, and even after the two Potter and Potter Auctions, they will still have quite a few that they are keeping. One of my favorites in their collection was the Houdini Underwater Packing crate poster, which can be seen to the right. This poster found it's way to the Copperfield Museum, along with several other wonderful pieces. I think David might have also got the very rare and very large KELLAR poster that was similar in size to the Houdini Under Water Packing crate escape poster. 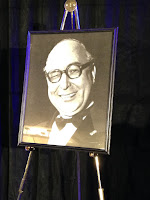 There were a number of highlights for me. The first lecture of the event was by William Rauscher who spoke about Kalanag. I will make this simple, I loved his presentation. He gave a great narrative of the life of a very complex man, Helmut Schrieber. Mr. Rauscher did not try and white wash his connection to the Nazi party, or rewrite history by saying he didn't have anything to do with it. Rather he put the entire story into historical perspective. There were many wonderful slides to go along with the talk. My favorite part was when a video clip was played of Kalanag presenting the Billiard Balls. It was such a simple routine and far superior to most versions I've seen. Great lecture. 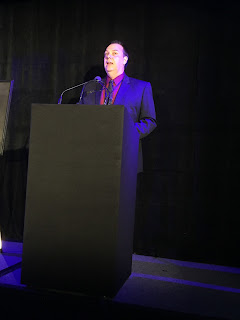 Next up was yours truly, the Magic Detective, talking about the Life of The Great Maro. This was supposed to be a repeat of the lecture I presented last year in Leland Michigan. I reworked the lecture to appeal to the magic crowd. I assumed that everyone knew about Maro, to some degree, so I wanted to give them information they might not have been aware of. My lecture was a big hit with folks.  I talked to a lot of people who really enjoyed it. The most common comment was "I'd seen the Maro posters but never really knew anything about him." I'm glad I could share my knowledge of this fascinating man who died too young, with this group of magic history fans. After my lecture, two different people told me they had Maro material in their collections, both described posters which I had never seen before. So I may be writing more about Maro in the future.

Following my lecture, they started to get ready for the Auction. This was great fun and I walked away with a book and some Le Grand David posters and programs. There was one item that I had bid on fairly high but eventually let it go, I forget what item that was. The funniest part of the lecture to me was my assistant Denise, who was with me. She won so many items I couldn't believe it. In fact, I wish I had been a fly on the wall when she walked in her front door carrying a guillotine!!! 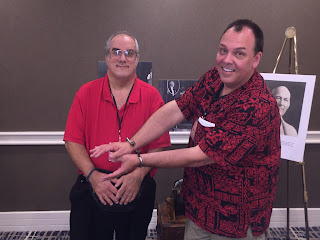 My buddy John Hinson was full of surprises. He stopped me on day 1 at the registration booth to tell me he had something special in store for me. That something special was a pair of Houdini's Hamburg 8 handcuffs. He even let me try them on! We couldn't quite snap them shut because my wrists are much larger than Houdini's. But it was still a great experience. John had quite an amazing display of photographs and I will share those on another blog article.

I'm not sure it's fair to say that 'such and such was a highlight', because frankly EVERYTHING was! I love magic history, so around every corner there was so new treasures to behold and experience. Many of these gems came in the form of the wonderful people attending the conference. So many people came up to me and shared their time and stories with me. I just loved that.

Tom Ewing's lecture on Mac and Mabel (MacDonald Birch) was incredible! Tom has quite a fine collection of Birth memorabilia as well, including a backdrop from the show. Like the other lecturers, his presentation included a slide show. Tom also has a new book out on Birch which I have to pick up!Eddie Dawes lecture was so informative and interesting.

As far as the evening shows, they were quite interesting. A fellow named Leland Falkner who I was unfamiliar with did a splendid job with Troublewit and Chapaugraphy. William Rauscher gave us some old school magic which must have taken hours to set up. John Bundy and Morgan were present one night to present their take on The Spirit Cabinet. David Oliver presented a routine which I just saw for the first time a few days before the conference and then got to experience it live. The routine was his take on the Pavel Walking Knot. This is a routine I've done for years, but David has really made this routine into a masterpiece. A period act bringing Richard Potter to life was pure magic through and through. The final night Lyn Dillies presented her full evening Illusion show and I'm frankly not sure how she pulled off all those illusions in such a tight area, but she did!

I didn't cover everything here, as I'm saving a few things for future articles. But I would like to say this, if you have ever considered attending a magic history conference, you should really look into the Yankee Gathering!
Posted by Carnegie