Why The Challenge Escape Act Was Pure Houdini Genius

Of all the various escapes that Houdini performed in his life, I personally think his Challenge Escape concept was the best. Houdini was mainly a Vaudeville performer, which meant he was on the bill with quite a few other acts. The majority of the acts, did the same material over and over and over and over. Sure they might have had a small collection of different routines they could do, but most just did the same act or some form of it.

Along comes Harry Houdini who is making a name for himself as an escape artist. Yes, pushed along by Martin Beck, but still Houdini was the one with the abilities. He starts with a fairly general style escape act, and soon it's being copied and ripped off.  So he adds the idea of being challenged with anyone's handcuffs. This works well for a while and establishes the whole Handcuff King idea in the minds of the audience. But then it too is copied.

Houdini then comes out with the Challenge Escape Act. Let's say he is booked for a week at a theatre. Most acts are doing the same material. Houdini can offer a different act every night. And often something never before seen. At the time, I'm sure every 'challenge' seemed unique, but history shows that often these challenges were duplicated in different cities. One example is escaping from a metal can filled with water, then in another city, a iron drum filled with milk, and still another city, a giant metal keg filled with beer. Same escape, different liquid inside. But for each town it was new to them. Plus, it wasn't like you could turn on the TV and watch Houdini. If you wanted to see him face these challenges, you had a go see him in person.

In a given week you might see Houdini escape from a packing case, then another night, escape after being tied up by Sailors, then another night escape from some unusual contraption like an oversize Paper Bag, and on and on it would go. He could also put his regular material in there as well. If I have a chance to see Houdini face a different challenge every night, I'M GOING! It's a sure fire draw.

We know today that Houdini arranged a lot of the challenges. Flyers and small posters like the one below would advertise the coming feat and usually the daily newspaper would include the challenge in the drama/theatre section. It's pure brilliance. Houdini, the little guy, is challenged, usually by some authority or business, and faces the possibility of failing in front of the live audience. In the minds of the audience Houdini is the Underdog. But the truth is, he is an expert at this stuff. He knows this world better than anyone alive and is actually the driving force behind many of the challenges. It's exciting and dramatic and it makes for great theatre! 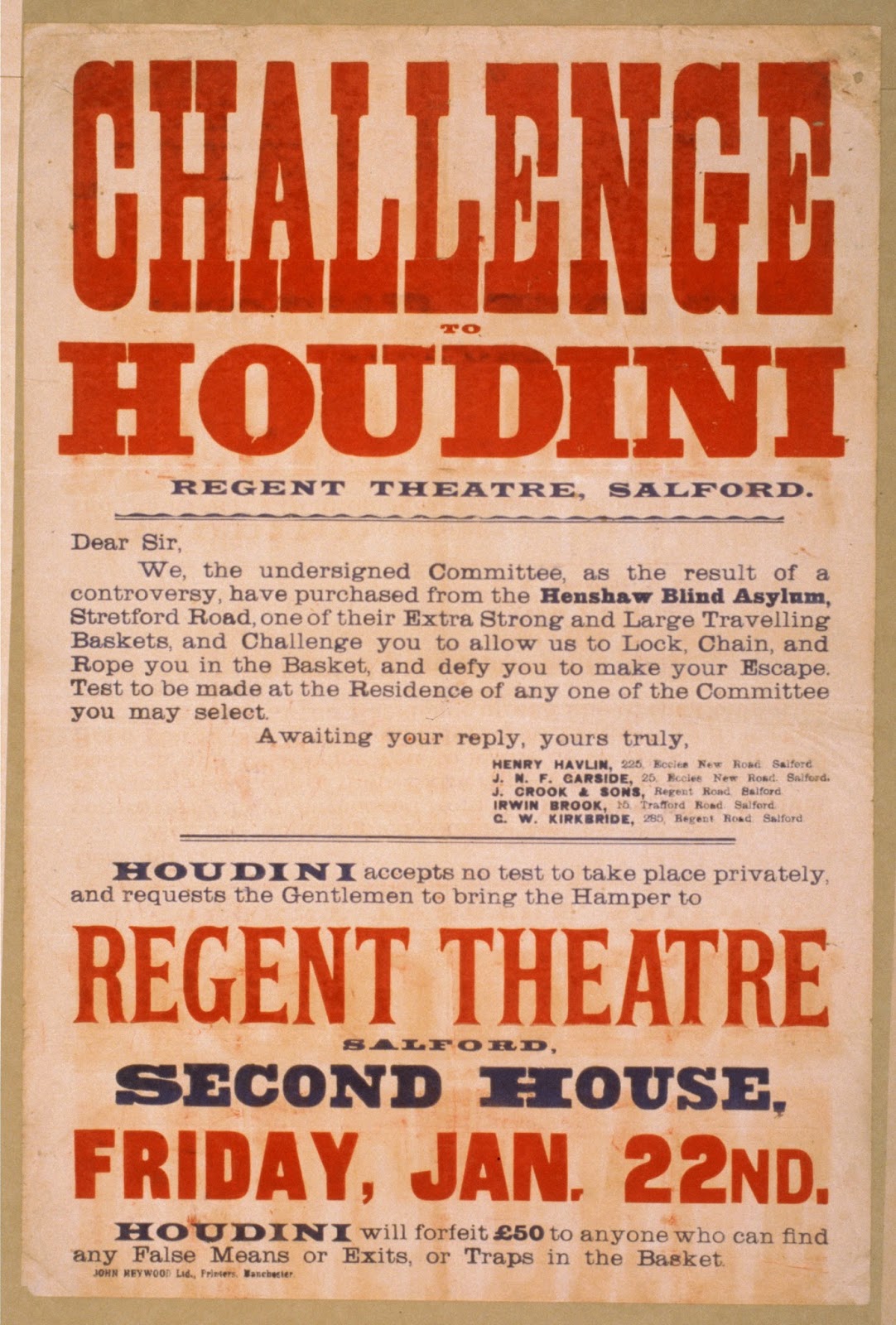