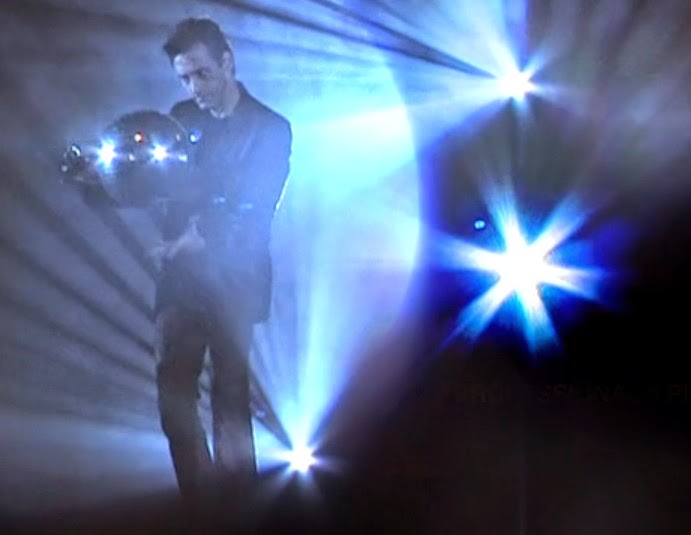 HISTORY
The Floating Ball was the creation of David P. Abbott. Well, actually, the original version was the creation of Harrison Davies and appeared in the September issue of The Sphinx in 1905. This information was uncovered by Teller and written up in his Prologue to The Floating Ball Illusion Chapter in the House of Mystery-Volume 2 by Teller and Todd Karr and David Abbott. This book, House of Mystery is basically an expanded edition of David P. Abbott's Book of Mysteries. It's a MUST READ for anyone interested in magic history. But within it's pages is contained the full explanation and step by step instructions for the Abbott Floating Ball routine. His routine was unique in that it was a one person version that he only performed in his home, so he had control of all conditions.

David P. Abbott taught the routine to Howard Thurston and Theo Bamberg. Thurston included it in his show and Okito would use the Floating Ball in his own show and develop a routine that set a new standard for the time.

The Thurston version of the Abbott routine was part of his Spirit Cabinet routine. Interestingly, the Thurston routine has a slightly different method to the Abbott version. Thurston routine begins with the ball floating forth from the Spirit Cabinet. It moves and floats about the stage and at one point is hovering above the stage. It's at this point that Thurston walks away from the ball while it is hovering in mid-air. The ball eventually floats back to the cabinet.

Theo Bamberg, known as Okito, used the Abbott version as the starting point but worked to develop his own moves and sequences. In his book, OKITO ON MAGIC, there is a 5 page chapter where Okito discusses the history of his routine. Interestingly, he never divulges his routine but he does divulge that his routine was ten minutes long. 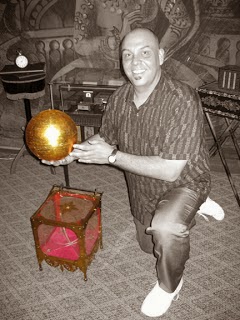 Okito passed his routine onto his son, David, known professionally as FuManchu. In the book, ILLUSION BUILDER TO FU-MANCHU by Robert Olsen, a section on the Floating Ball is included. The chapter is mostly written by Edmund Spreer, who learned the Floating Ball from Okito and even hand made the Floating Ball for David Bamberg. The chapter gives a lot of details to the Fu-Manchu routine, which we can assume was identical or at least very close to his father's routine. The photo to the right is yours truly holding the Spreer made Fu-Manchu Floating Ball and below that the plexiglass box that mysteriously opened on it's own to allow the ball to float out or float back in.


Moving to the later part of the 20th Century we have Doug Henning's Floating Ball routine. The Doug Henning version came from Charles Reynolds who got the routine from a source I won't reveal. Well, it's not that I can't, it's that I have no idea what Gaeton Bloom said on the Luis Dematos Floating Ball DVD! And frankly, I so enjoyed the talk that Luis and Gaeton had about the ball, that I don't wish to spoil it. (You can read more about the DeMatos Floating Ball and DVD below.)  I can say that the Henning version always thrilled me but it seems the actually working of the routine was very different from what I thought it was. Let's just say the routine was 'All Doug'. Now, you take a moment to watch the following video of the The Henning Floating Ball.

That was part 1 of the Henning Floating Ball. Part 2 was something he only included on his TV Special. He would walk over to a large empty box and place the ball inside. Suddenly, the ball would emerge from the top of the box, but this time it was enormous. As it began to float up and down, it would begin to illuminate and the figure of a person could be seen inside. As the ball lowered it split in half revealing actress/dancer Joey Heatherton. This was really two different Floating Balls combined into one routine.

After Doug Henning, the next person to really bring the Floating Ball to the forefront was David Copperfield and Don Wayne, his magic consultant. The Copperfield version of the Floating Ball appeared on one of his early specials and featured the floating of a large disco mirror ball. The method for the Copperfield routine was the idea of Don Wayne. Following the TV special, Don Wayne sold a smaller version of the ball to magicians, along with a booklet on this Don Wayne method. His method, a two person version, opened the door to some amazing moves and sequences with the ball that were previously more difficult to do. The Copperfield routine was probably the most theatrical routine of all the versions combined. Like the Henning routine, Copperfield cleverly mixed different methods into a longer sequence. The Copperfield ball was covered at the end, floated upwards and then vanished as in an asrah levitation. You can enjoy that video now.

Peter Loughran put out a version not that long ago that was the creation of Steven and Michael Pignataro, it was called Voyager and was the first Floating Ball to include a lot of the 'hidden stuff' needed to create the full illusion.

Next we have the TELLER Floating Ball. I have sadly, never seen the routine in person. I believe he calls his version 'The Red Ball'. The Teller inspiration came from the Abbott routine. Whether or not he uses the Abbott method or has developed something of his own, I really don't know. I'm not even sure the ball floats! From what I've read, it's more along the illusion of it 'coming to life'. But I do know that the 'secret' is told to the audience just before the routine is done and it still retains a very magical quality. Though with Penn and Teller, can you really be sure they've told you the secret????

Luis has put out a DVD on the Floating Ball and his method as well as a history of the ball. He covers a number of historical things that I do not mention here.   As far as the Luis DeMatos Floating Ball DVD is concerned, I absolutely loved it. I've actually gone back and watched the performance part about a dozen times.

Luis DeMatos is not only selling a DVD but he is also selling his Mirror Ball, complete with DVD and all the necessary items needed to do his routine. I think that the Luis DeMatos version is not only the best routine of it's kind I've ever seen, it is also the biggest advancement in Floating Ball technology since the Don Wayne version. His routine might not be as theatrical as the Copperfield version, but it has a purity and elegance all it's own. For those interested, below is a somewhat edited version of his routine and you can start to get an idea that this is not your father's Floating Ball!
THE FLOATING BALL by Luis de Matos from Essential Magic Collection on Vimeo.
Posted by Carnegie