In Search of Fu Manchu

I first heard of Fu-Manchu/David Bamberg while reading the book The Illustrated History of Magic by Milbourne Christopher. David Bamberg came from a long line of magicians, six generations. His father was the equally famous Okito/Theo Bamberg. But it wasn't until I saw the Le Grand David Show for the first time in 1980 that the Bamberg Dynasty took on new life. Here was a show, Le Grand David and his own Spectacular Magic Company, that was inspired by the show's presented by Fu Manchu that Cesareo Pelaez, the groups founder, saw as a boy.

There must be something to this guy, David Bamberg. Then I read that Dai Vernon, Jack Gwynne and Jean Hugard thought the Fu-Manchu Show was the most beautiful show they had ever seen. In fact in his column for Genii Magazine August 1974, The Vernon Touch, Dai Vernon refers to the FuManchu show like this, "to my way of thinking it was the perfect show." Many professional magicians of the 20th Century thought David Bamberg's show was one of the most incredible magic shows to ever grace the theatrical stage. But, precious few people saw the show here in The United States. The show mainly toured South America and Mexico. In that part of the world, Fu-Manchu was bigger than life. 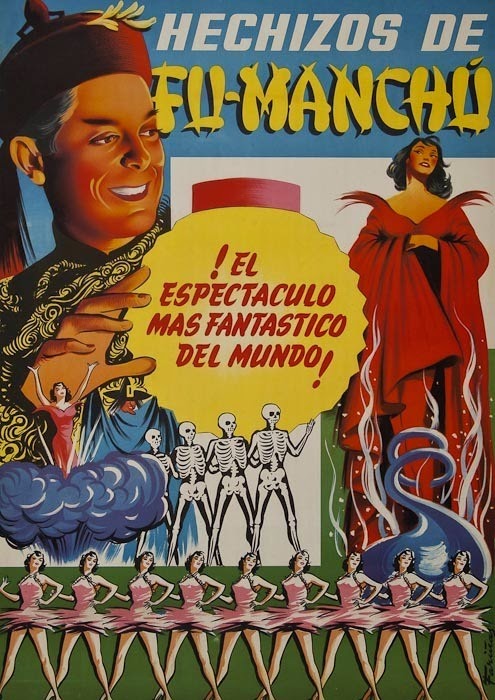 I'm going to share some elements of the life of David Bamberg in the hopes that modern day magicians who are unfamiliar with Fu-Manchu can discover a new respect for this giant in our art.


It all begins with the Bamberg Dynasty of Magicians.


Young David was clearly born into a world of magic. He was appearing as an assistant on stage with his father at the age of four. He would meet every famous magician of the time. When his father Theo was working for Thurston, young David would often be one of the 'volunteers' for the Eggs from Hat routine. One of his earliest jobs was working with The Zancigs, who were a mind reading duo. Julius Zancig apparently did a pretty good selling job on Okito by promising the boys work would not interfere with his studies. The stagename that young David chose was Syko. The name Syko was suggested to him by none other than Harry Houdini.

One of my favorite stories of David's magical education comes when he learns about the early Tarbell Course being offered. According to his autobiography, Illusion Show, David contacted Harlan Tarbell with the hopes of getting on the mailing list. But to his surprise, he began receiving the course along with nessesary gimmicks. He was able to put together two shows that he could travel with easily. Having this magical foundation helped him greatly when he took on the venture of a much larger show.

If you're wondering what material David chose early on, well he lists a few of the items in his book, on pages 152-153. These include: The Egg Bag, The Vanishing Wand, the Linking Rings, the Paper Tearing, the Card in Banana, the Needle Trick, the Multiplying Balls, the Ghost Silk and Tarbell's Cut and Restored Rope (which is a hidden gem).    The Paper Tearing would remain a staple with him throughout his career and he continued to use the other items as fill-in material when needed.

Incidentally, there is a great story in his book Illusion Show on how David Bamberg discovered the mystifying secret to Houdini's Needle Trick. I won't give it away because I don't want to deprive anyone of the wonderful stories contained in the pages of his autobiography.

Like his father, David went with an Asian themed show and character. Unlike his father, Theo, who created a unique name OKITO, David took different route. I always thought it was a coincidence that the Fu-Manchu name that David Bamberg used and the Sax Rohmer character called Dr. FuManchu were the same. However, there is no coincidence. Sax Rohmer created the name first, and David appropriated it for his character name. Though, David's character was not a diabolical evil genius. Copyright law prevented him from using the name Fu-Manchu when he came to perform in the United States for a brief time, so for a short time he was known as FuChan.

It was interesting to read that Okito was very discouraging when it came to the idea of a big illusion show. Okito thought it was better to travel light while David had the vision of a much grander production. David's show had other issues besides size. The number of people in the company made it practically impossible to present in the United States, he had to scale the show back some. But in South America and Mexico, where he mainly performed he didn't have the issues with theatrical unions that he ran into here in the States. He did occasionally run into travel issues with a large show. But his success in South America proved that he knew how to make it work.

As Fu-Manchu David was very successful. He eventually made three films as a sort of Magic Detective. The movies are available today through the MiracleFactory.net. The three films were called; The Ghost of the Bride (El Espectro de la Novia),  The Headless Woman (La Mujer sin Cabeza), and  The Black Ace (El As Negro). 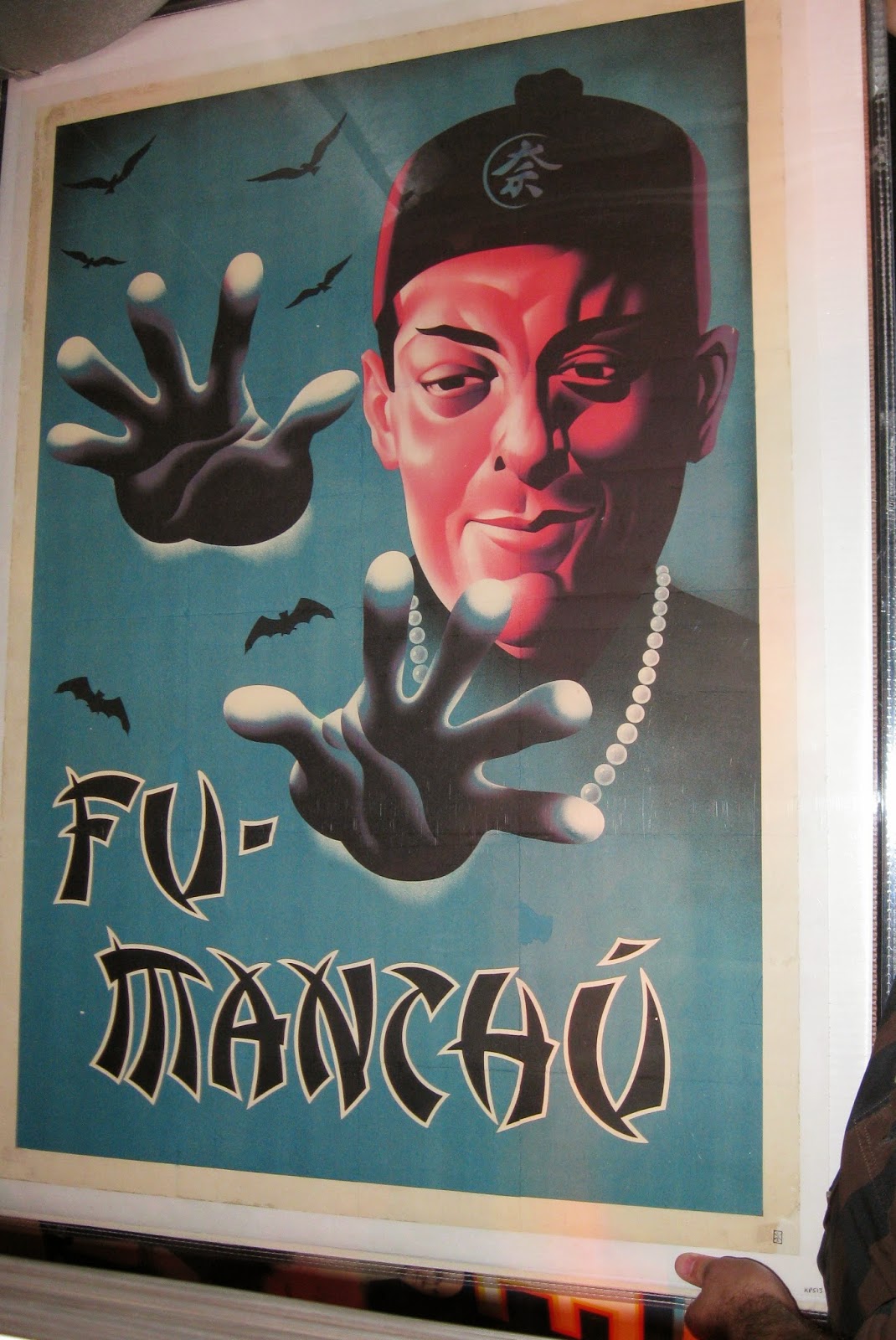 Fu-Manchu presented his final show in 1966 and then retired and opened a magic shop in Buenos Aires. He passed away on August 19th, 1974 thus ending the longest family dynasty of magicians. There is no grave for David Bamberg as his ashes were scattered at sea.

David Bamberg was certainly a fascinating character. I've mentioned his autobiography ILLUSION SHOW, several times. It is out of print but can still be found. It's a must read for any student of magic. The next book he wrote along with Robert Albo and Eric Lewis is called The Oriental Magic of The Bambergs. This book has many of the secrets not revealed in the Okito on Magic Book by his father. And there are many wonderful photographs of the props used by both Okito and FuManchu. In addition to this, there is a great article written by David Bamberg that appears in GREATER MAGIC in the chapter on Stage Presentation. It's a must read. There is also another fine book on the magic of FuManchu called Illusion Builder to FuManchu by Robert E. Olsen.


Cesareo Pelaez and Juan Tamariz in particular were inspired by the Fu-Manchu Show. Cesareo went on to produce the longest running resident magic show in the history of the U.S. And Juan Tamariz went on to change the face of magic not just in Spain but all over the world!

I used AskAlexander.com to bring up old articles on Fu-Manchu and read many of the show reviews. For the most part the reviews were the same, complimenting Bamberg on the beauty and spectacle of his marvelous show. I did come across one review however that made me chuckle. The reviewer clearly enjoyed the show but couldn't understand why Fu-Manchu included those 'old' hand shadows in his act. I guess not everyone is a magic historian!

I did a lot of research on David Bamberg for this article, but only ended up using a very small part of what I discovered.  So, I have a feeling I'll be returning to Fu-Manchu again and again.  I hope you enjoyed this brief journey into the life of David Bamberg and I look forward to bringing you more stories from his life in the future.