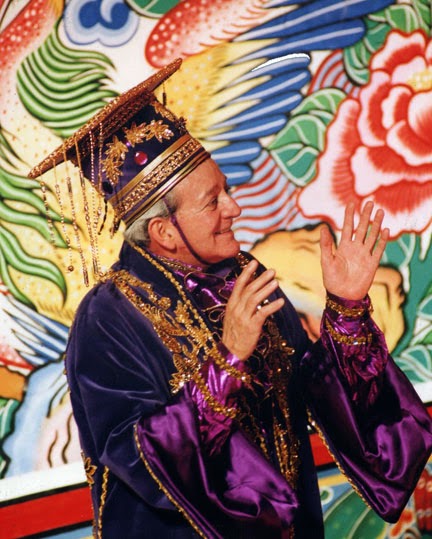 It was two years ago today (March 24) that Cesareo Pelaez passed away. He was 79 and had been suffering from congestive heart failure as well as the after effects of a stroke. Two years ago, I wrote the obit for Cesareo in Genii Magazine. I'm reprinting that piece below.


Cesareo Pelaez passed away at 3 a.m. on March 24th, 2012. He was a real wizard for his magic transcended tricks. He dared to dream things that few others even had the courage to imagine, and his dreams became reality.

He was born October 16th, 1932 in Santa Clara, Cuba. As a boy his father took him to see many of the traveling theatrical shows that would visit the island. Among the magicians young Cesareo saw were David Bamberg/Fu Manchu, Richardi Sr. and Jr., and others. These grand productions had a profound effect on Cesareo and they would later become the inspiration for his ultimate theatrical dream, a resident magic company.

In the 1960s, after having studied education and psychology in Cuba, he fled his homeland as Castro’s grip took hold. He escaped disguised as a Priest and would up in Columbia first before coming to the United States. He would eventually become a professor of psychology at Salem State College after having studied with Abraham Maslow.

But for the magic world things really began in the 1970s as Cesareo started to gather the people who would eventually become the founding members of a resident theatrical magic company. Together, they purchased the Cabot St. Cinema Theatre in Beverly Mass, and worked night and day to get it ready for their new production.

On February 20th, 1977, the first performance of Le Grand David and his Own Spectacular Magic Company hit the stage. A 2 hour show of stage magic presented in a manner that hadn’t been seen since the early part of the 20th Century. Lavish costumes, intricately decorated props, beautiful scenery and a cast of thirty people would become the hallmark of their unique brand of magic. The costumes, scenery and most of the props were built, sewn and created by the members of the company under Cesareo’s direction.

Cesareo’s role in the adventure was as leader and director. He chose the character name Marco the Magi, but allowed his young apprentice, David Bull, to get the larger billing.
The show grew in size and scope. At one time they had as many as 60 members in their company.

The magic world took notice of what was going on in this small town and began writing articles about Cesareo and the company. Even TIME Magazine wrote a two-page article about them. By 1984, the Cabot St. Theatre was in full bloom showing movies Monday through Saturday and presenting the Le Grand David Show on Sundays. Now it was time for Cesareo to approach the members of his company with another idea, purchasing a second theatre. The Larcom Theatre was a few blocks away and was originally built by the same people who build the Cabot.

This time professionals largely did the restoration of this theatre, though the decorative work was done in-house. On June 4, 1985 “Le Grand David In Concert” opened at the Larcom. This show had a charm and elegance all it’s own and an achievement that made this group seem unstoppable.

Cesareo kept his full time position as Psychology Professor at Salem State College during this entire time. He had guided the restoration of two theatres, directed two different theatrical magic shows, helped design countless posters and artwork to promote the shows, and was involved in an untold amount of details that many of us will never know. If that wasn’t enough, in 1985, Cesareo was elected President of The Society of American Magicians. Any one of these achievements would be enough for a single individual, but Cesareo’s motivation was different. To him, it was about realizing one’s full potential and about helping others discover abilities they never knew they had. In this way, his efforts were more a labor of love for life and his fellow man, than they were for show business.

In 2005, Cesareo suffered a stroke. He had also been diagnosed with congestive heart failure. He did return to the stage briefly, but the illnesses eventually forced him to be a spectator to the shows he helped create. Though he was unable to perform, he never stopped guiding, directing and inspiring his friends and fellow cast members.

Cesareo Pelaez approached all aspects of life with passion, enthusiasm and dedication. He was the consummate teacher demonstrating by the way he lived what heights we could reach if we tried. His life was a testament to the idea that nothing is impossible.
Posted by Carnegie