Yesterday, Feb 23, 2014 was the Auction to sell the show and props of Le Grand David and His Own Spectacular Magic Company. This was the longest running resident magic company in the world. Headed by the late Cesareo Pelaez, the show began in 1977 and ran for 35 consecutive years.  It was the type of show that you will never see again. If you missed the chance to see the show, you missed one of the greatest theatrical experiences in life, trust me on that.

I saw the show the first time in 1980 while on a family trip in New England. I had seen the advertisements for the show in Genii Magazine. In fact, I would get LeGrand David himself to sign my issue of Genii. And if that wasn't wild enough, attending the performance that same night were Bill and Irene Larsen, editors of Genii Magazine and co-creators of The Magic Castle! So I was able to meet Mr. Larsen that evening as well.

The show had a profound effect on me. For years later my mind would go back to that night when I witnessed a truly remarkable event. I remembered a speech that Marco the Magi gave during the show about the origins of the program, and how the members of the company made most everything by hand. I would look through the programs that I purchased that night, many times over the years, and vividly recall the first night I saw the LeGrand David Show.

Years later, April 2000, I was invited by Cesareo to be a guest for the weekend. I brought my girlfriend with me. She knew nothing of the show or the people. As we went up, I showed her an issue of MAGIC Magazine that was done on the show and tried to give her some idea of what to expect. Before I left, I had mentioned to my good friend Ralph, that I had a strange feeling that I wasn't going to be the same person when I returned.

Before I go further, let me ask you. Have you ever had a car that was not quite tuned properly? It would run, but was always sluggish? Or perhaps a computer that would work well about 80% of the time but would seem to crash or lock up at the worst times? Well, that was me. I mean, that's kind of how I was when I went up there. I was not running at full capacity and had some issues with things in my life. But during that trip, I had a conversation with Cesareo that was like a mechanic giving a car a tune-up. It was nothing major, nor earth shattering. But it was just the right thing that I needed to hear at that moment and it seemed to straighten out all the conflicts I was having.

I would have many conversations with Cesareo afterwards, but looking back, not as many as I would like to have had. I remember him telling me several stories of the magic shows he saw in Cuba. I remember the suggestions he gave me about my own show. He would often give advice that seemed a bit harsh, but upon reflection was the perfect solution. On one visit I mentioned the current state of my show and he said that when I returned I should bring a video of the show and we would watch it together and he could make suggestions, if I was interested. Of course, I was! And then, a week later, his health started to decline. There were concerns he would never return to the stage and of course concerns for his everyday life. To everyone's amazement he did return to the stage, briefly, just to show that he could. But his health was limiting his abilities to do much on stage. I'm sure he continued to direct, create and give advice off stage. I sadly, never got to share my show with him in person or via video.

But in some ways, Cesareo is always with me during shows. I hear his advice constantly. That might sound weird. But I understood the way he thought. Through the many books on Cesareo and the company I was able to get to know more about his life and who he was. I was not able to get to know him better after his stroke and continued health problems, but I did return to Beverly when I could.

Just to give you an idea of what a profound effect Cesareo Pelaez had on me, not only did he help me to get my life in focus, he also encourage me to write, and he encourage me to paint. This blog, would have never existed without that encouragement. The hundreds of paintings that I've done since 2000 would never have been painted had it not been for Cesareo. The magazine articles on my artwork would have never happened, the commissioned paintings would not have been done and the sale of my artwork would not have happened because I would never have continued painting. As for writing, besides this blog, I have two books on escapes that I wrote, two sets of lecture notes, a bi-monthly column for a magic magazine and a book on Houdini (not quite finished) and a children's book (almost finished). One man, who inspired me to live a better life and through his own creative endeavors, inspired me to be a more creative person myself. 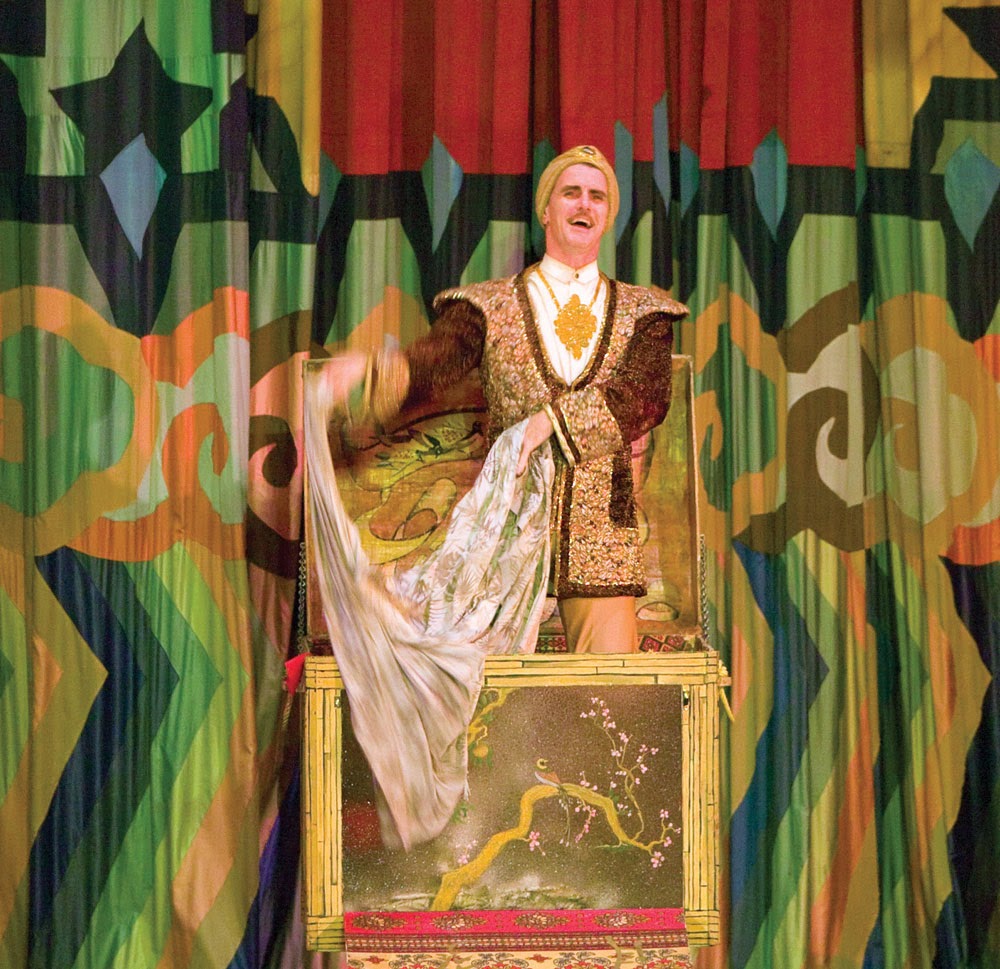 Now, the LeGrand David Show was more than Cesareo, he was just the originator of the idea and the driving force. But the members of the company, they were the muscles, the soul, the blood, the flesh of the operation. And nicer people you could never meet. David Bull, who was the guy who played LeGrand David for 36 years, is one heck of a gentlemen. I don't know David quite as well as I'd like but I do consider him a good friend. He is without a doubt the most underrated magician in the country. When people talk about who are the greats of today, they might mention David Copperfield, Lance Burton, Penn & Teller, David Blaine and Criss Angel, well David Bull/LeGrand David belongs in that group. He was basically the star of that show for all these years and stardom never went to his head. In fact, he is decent and humble and gracious and very kind. The best qualities in a person, you'll find in David Bull. And that was my experience with all the members of the cast that I had the honor to get to know. And believe me, I know everyone is human and everyone has their faults, sure. But I never experienced anything but kindness from all of them.

And now, their iconic show is no more. It has been sold off. 270 items ranging from props, to curtains, to illusions, to costumes to scenery and posters and paintings. All sold off. In some ways its good because some folks who truly cherished the show now get to keep a piece of that wonderful show in their collections. One person in particular is David Oliver. I read his story on Facebook earlier and I smiled as I read his story because his first encounters with magic and LGD were the same as mine.

I tried to get certain things in the auction. In fact, I will reveal what I was looking to get. The Floating Table that Cesareo used in the show. The backdrop for the Floating Table Routine. The bronze sculpture of Cesareo presenting the Floating Table. The two original Floating Tables.  One of Cesareo's costumes. The Thief of Bagdad Trick. One of the hand painted posters from the show and one of the illusions. I will say for me, the day was the best of days and the worst of days. I did get some of the things I was after. But I lost some important things, one because my bid wouldn't go through a couple of times and also because the price shot way higher than I could afford.

In the end, I did get the backdrop for the Floating Table, One of Cesareo's costumes and because my
wonderful assistant Denise was also bidding, she was able to obtain the Mail Bag Illusion and The Original Floating Tables, of which I will now have one of those tables for my collection. Let me share with you the pieces that we were able to obtain.


To ANYONE, who won an ILLUSION in the auction OR the Thief of Bagdad Trick OR one of the hand painted posters, OR most specifically, the Floating Table & Painting, IF you are ever interested in selling these, please contact me carnegiemagic@aol.com as I would be very interested in preserving these amazing pieces of magic art.
In the meantime, I hope you cherish these wonderful pieces that were created and performed all by kindness.

This is the screen partition for the Mail Bag Escape that David presented in the show. I first saw this performed in 1980 and it was just as amazing all these many years later.
This is owned by my assistant Denise now.