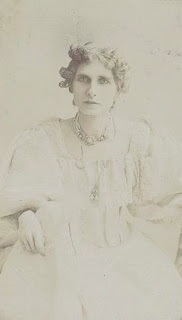 For the record, I love searching out the graves of dead magicians. Mainly because it's so darn hard to find the graves of living ones. On Episode 2, I showed three photos of graves of magic related people. The first was the grave of Anna Eva Fay Pingree. Anna Eva Fay was a phenomenon in her day. She was born Ann Eliza Heathman in 1851, just at the time that the Fox Sisters and the Davenport Brothers were making news as spiritual mediums. She apparently showed signs of having 'the gift' and was encouraged to move in this direction. Ann met a man who would become her manager and he taught her the actual gifts (the methods used by fake mediums).  They created an act where she would present 'Light and Dark Seances' on-stage for audiences. Among her interesting creations during the 'light seance' was the effect we know today as The Dancing Handkerchief.  Her 'dark seance' sequence was similar to the Davenport Brothers act, she would be tied to a chair inside a cloth cabinet and bells would ring, tambourines would play and other manifestation would occur.

Over the years she would move away from the seance aspect of the show and move more towards mentalism effects, all with a 'spirit' kind of theme to them. She retired from show business in 1924 and settled in Melrose Mass.

The next grave belonged to Mina Stinson Crandon, better known as Margery the Medium. She was the medium who The Scientific American Magazine was going to acknowledge to the world as being  a genuine medium and could really speak to the dead. Well, that is until Houdini got wind of this and he stepped in. Actually, he more than stepped in, he took over the investigation and an all out war ensued! Houdini had a special wooden box built to house Margery and prevent her from causing the manifestations to happen by her own hand. Her spirit guide 'Walter', who was her deceased brother, still spoke however and could be quite the salty tongued spirit.

Houdini successfully prevented the Scientific American Committee from awarding Margery with any sort of authenticity certificate.

She lived on Lime St in Boston and is buried in the Forest Hill Cemetery. The photo was provided to me by escape artist and investigator Norman Bigelow. Norm is currently offering a lecture about Margery and Houdini and other mediums.

Last up is a fellow who I've done a LOT of research on, William Henry Palmer, who performed under the stage name of Robert Heller. He was quite the performer. His show included not only magic, but mind reading and music. You see, Robert Heller was an accomplished concert pianist. The Library of Congress even has several of his pieces of sheet music in their collection. 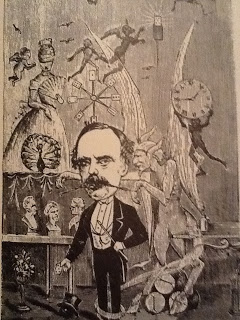 Heller traveled the world presenting his magic. He actually was from England but his career really blossomed in America. One of his most popular feats was his Second Sight routine. This was an early version of what we think of today as mentalism or mind reading. Heller used multiple methods to read the mind of Haidee Heller, a woman he called his sister but apparently she was not. Incidentally, there is a wonderful story I read that happened between Robert Heller and Haidee. After the musical section of the show one night, he and Haidee got into a quarrel behind the scenes. She refused to come out for the Second Sight routine. So Robert Heller walked out and announced "Ladies and Gentleman, this is the part of the program where Ms. Haidee Heller comes out, except tonight she refuses to do so. Let's wait and see." He then quietly took a seat on the couch and began to twirl his thumbs not speaking a word. A few moments a red hot Haidee came storming out. Heller said "Ah! I thought so" and they continued with the show.

Robert Heller died unexpectedly in November of 1878. He was on tour in Philedelphia and had performed at the Concert Hall on Nov 26th, but showed clear signs of being ill. It was pneumonia and he died the next day. His body was sent to Machepelah Cemetery in Philidelphia and was placed in a vault there. Sometime later it was moved to Mt. Moriah Cemetery where he remains to this day.