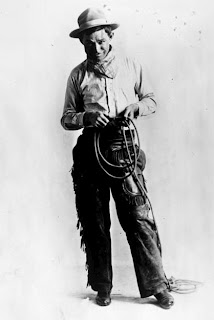 Will Rogers was a cowboy, entertainer and humorist. He rose from a cowboy who did roping tricks, to one of America's most beloved comedians. He and Houdini knew each other and worked together on many occasions. Houdini died suddenly in 1926 at the age of 52, Will Rogers too had a sudden tragic death at the age of 55 in 1935. Shortly after Houdini died, Will Rogers wrote about him in his newspaper column on November 21, 1926. Here are a few excerpts from his column.

Every one is any line of the theatrical business is always spoken of as a "Showman". Well what constitutes one is a man who can sell himself to the public in the very best way possible. Houdini was the greatest showman of our time by far.

A great many are good and can sell themselves fairly well, but they will generally lack something, and if you figure it out it's ability. Well, Houdini never lacked ability. No person appearing on an American stage ever had more license to be there than Harry Houdini.

I played with Harry, at Keith's Philadelphia over 18 years ago for the first time. I was roping my pony on stage and was billed to close the show (that is, go on last). Harry was just ahead with his handcuff tricks. It was late when he went on. He held that audience for one hour and a quarter. Not a soul moved. He would come out of his cabinet every fifteen or twenty minutes perspiring and kinder size up that crowd to see just about how they were standing it. Now, mind you when he is in that cabinet there is not a thing going on. A whole theater full are just waiting. The city police had put these cuffs on him. Now he had that something that no one can define that is generally just passed off as showmanship. But it was in reality, Sense, Shrewdness, Judgement, unmatched ability, intuition, personality and an uncanny knowledge of people. Say, when he had finished I just as well got on my little old pony and rode back to the livery stable as to have rode out on that stage.

Email ThisBlogThis!Share to TwitterShare to FacebookShare to Pinterest
Labels: Houdini, Will Rogers