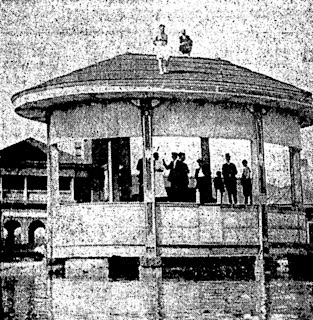 October 14, 1907, 11:00 a.m. Houdini was at CityPark in Denver Colorado to help promote his upcoming appearances at the Denver Orpheum. The stunt was planned for the newspapermen, but 100 people turned out for his escape.

Houdini was shackled by the Chief of Detectives William Loomis using 'Jack Shepard Irons'. His arms were secured behind his back as well as his hands and padlocks were placed in the irons. Houdini was helped to the roof of the band pavilion (see first photo above). 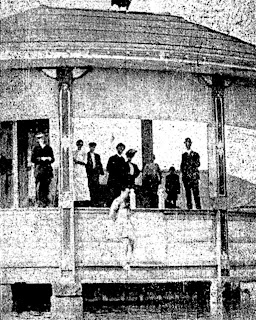 He leaped off the building feet first (second photo) into the lake and vanished below the surface of the water. The newspaper accounts said 'you could hear a shudder go over the crowd when he jumped as it did not seem possible for him to free himself.' Approximately one minute later, Houdini bobbed to the surface free from the restraints and  holding them in his hands. He swam over to a small boat (third photo) and was brought back to dry land. 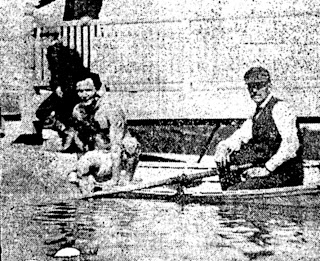 The crowd went wild when Houdini freed himself. Houdini was in town for a two week run at the Orpheum in Denver. A fairly typical stunt for Houdini, but probably one of the last jumps for that year as it was already October! Bridge and water escapes were for warmer climates.

Below is a photo of the location today. The Gazebo, or Pavilion has obviously been rebuilt, but this is the very location where Houdini did his escape in 1907. 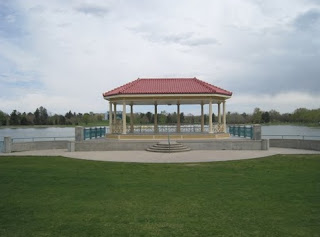