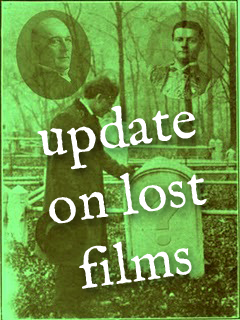 I ran an article about the funeral films of Harry Kellar and The Great Lafayette that Houdini had commissioned. I speculated that maybe just maybe they might still be around though they were certainly lost at the moment. John Cox was the first to chime in with a very smart comment regarding the explosive nature of the film material and how doubtful it would be that they'd still be around. This was followed by another excellent comment by Gregory Edmonds backing up John's thoughts and adding quite a bit more historical information to the mix.

Well, thanks to John Cox and also Joe Fox (hey Joe!) a photo of an article from the MUM Magazine October 1958 has appeared! It's the smoking gun that reveals that at least in 1958, the footage still existed and was in the possession of Larry Weeks. Mr. Weeks was attempting to get all the footage transferred over to a safer and longer lasting medium. Among the film footage that Larry Weeks had was 'the original Grim Game Movie, the Monastery Escape that Houdini did in France; the original films of his historic flight in Australia in 1910; his hanging straight jacket escape filmed in many cities; his Overboard Box Escape; Lafayette's Funeral; Houdini's own funeral; and others!

So it seems that luck and good fortune may be on the side of history here. It's still kind of an unknown as to whether Larry Weeks got all this footage transferred. We know he did get the Grim Game transferred over. So lets hope that the Keller and Lafayette funerals are still preserved for history and that we might see them someday, soon.

UPDATE: Here is something else I just ran across. While researching the life of Anna Eva Fay I stumbled upon something shocking. To preface, I've recently put up a couple articles about the lost films of Houdini, mainly his funeral films of Lafayette and Harry Kellar. Well, imagine my surprise to learn when Houdini went to visit Anna Eva Fay in her home in Mass., he brought along a movie camera to record the event. So here is yet another lost film. Maybe, just maybe it's among the Larry Weeks Collection as well.

UPDATE UPDATE: Yes, there is another film that I don't think has ever been seen. Reports say he was tied to the tower of the Heidelberg Building in Times Square. The New York Times says that after the escape he tossed the rope down to the crowd. However, other reports say he was placed in a straight jacket and hung upside down over the edge of the Heidelberg Building. He was going to repeat one of these stunts from the fire escape of Hammersteins Victoria, but the police intervened. Does this film still exist today?
Posted by Carnegie