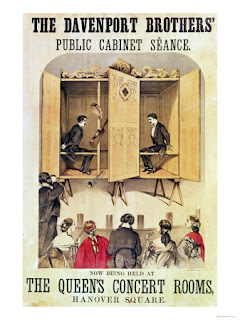 There is an interesting similarity among the magicians from the Civil War period. A commonality of effects if you will. In other words, they stole from each other back then as much as today. In fact, I noticed a trend among magicians to purposely steal certain routines and then 'expose them'. Specifically, the routines presented by the Davenport Brothers. Their creation, The Spirit Cabinet, along with their spirit manifestations, or fake spirit manifestations showed up in the acts of; John Henry Anderson, Samri Baldwin, Prof. Harry Cooke and many others. Interestingly, the Spirit Cabinet would continue in the years past the Civil War and become a popular feature with Thurston, Kellar, Carter, Willard, Blackstone, Calvert and many others. Today it is being revived once again by Michael Ammar and his wife Hannah, who is the daughter of Frances Willard, the daughter of magician Harry Willard. 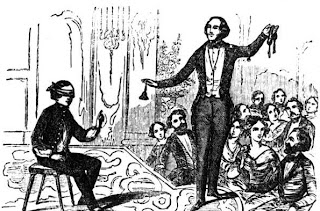 Here is an effect from the repertoire of Robert Houdin. He presented this trick with his son. While blindfolded, his son Emile could identify objects that his father held up which were in full view of the audience but unseen by his son. This same routine somehow, mysteriously ended up in the show of Compars Herrmann, who presented it along with his younger brother Alexander. Other magicians took the same trick and began to alter and adapt it. Chief among them was probably Robert Heller.

Today, second sight demonstrations are a regular part of a mentalists performance and sometimes seen in magic acts. The Evanson's come to mind as an excellent example of a modern couple presenting the Second Sight Blindfold act. The Gun Trick
A very popular effect was notorious The Gun Trick or Bullet Catching Trick. This effect was used by John Henry Anderson with great success until he sold it to Wyman the Wizard who also had a lot of luck with it. Signor Blitz used it, but he was not always so lucky.  In one particular instance an audience volunteer loaded a button in the hole of the rifle and when it was shot the button ripped through the skin of Blitz's hand. Several close calls like this were enough for him to eventually remove it from his act. After the Civil War Alexander Herrmann added the effect to his show, as did William Ellsworth Robinson. Mr. Robinson was better known as Chung Ling Soo and was also one of the many individuals who was killed on stage presenting the Bullet Catching Feat. Today, in the 21st Century the effect lives on in the act of Penn & Teller. 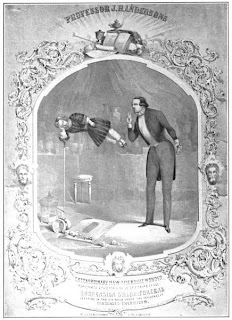 This is Robert-Houdin's Ethereal Suspension. I believe the first pirated version shows up in the act of John Henry Anderson who called it 'The Suspension Chloriforeen'. He picked up his copy of the trick from a former mechanic who had worked for Robert Houdin. Compars Herrmann was also using the Suspension Illusion as well. For those newbies to magic, though the effect might seem like a levitation, it is not. In a levitation a person apparently rises in the air. In a suspension, they are held or suspended in space. Levitations and suspensions are similar enough and generally fall in the same category in magic.

The Suspended Lady illusion actually dates back to at least the 13th Century and possibly further. Today it's commonly known as the Broom Suspension and has been used by countless performers (including me). This effect appears in the Tony Curtis Houdini movie, however I am not sure if Houdini actually ever presented the effect in his show. Richiardi Jr. had one of the most incredible presentations of the trick. It also is a highlight of the Le Grand David Show in Beverly Mass. 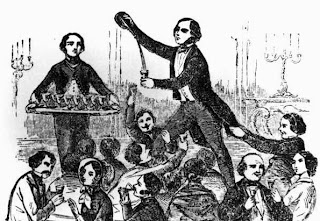 Now here is a fantastic trick. Actually, all of the things I've mentioned so far are great and you'll note that they all are still used in some fashion today. Thankfully, modern artists have altered them to fit the times, but why throw out a perfectly good trick? The Inexhaustible Bottle is an illusion where a glass bottle is filled with water and rinsed out. Then any liquid called for can be poured from the bottle, typically alcoholic drinks. According to Houdini, the trick dates back to 1635 and an effect called the Inexhaustible Barrel. Basically it's the same effect but using a wooden whiskey barrel. Robert-Houdin claimed to have invented it and as has been seen before this effect showed up in the acts of many other performers. One in particular Compars Herrmann who used it during his show at the White House before President and Mrs. Lincoln and their guests.

David Devant, the great English conjurer updated the effect by using a tea kettle rather than a bottle. Later, Charles Hoffmann created an entire act around the effect and he became known as "Think A Drink Hoffmann". Today, the effect, in it's Tea Kettle form, lives on in the act of Steve Cohen, The Millionaire's Magician.

Other Staples
It will come as no surprise that the following effects could be found within the repertiore of Civil War magicians: The Cups and Balls, The Sucker Die Box, The Devils Hank/Napkin, Passe Passe Bottles, Flower Productions/Botania, The Genii Tube/Cornucopia, Early Versions of the Misers Dream in various forms, Rising Cards, Handkerchief productions/vanishes, Flag productions and more.

Ventriloquism & other variety arts & acts
While not magic, ventriloquism was a popular addition to many magicians acts from the Civil War era. Among the practitioners of this craft were Signor Blitz, Wyman the Wizard, Fred Bearns and others. Robert Heller added Punch and Judy shows to his repertoire. Blitz had trained birds. Robert Heller was a trained pianist and he added musical numbers in his show which gave it an elegance and sophistication that other acts lacked. Adding variety and skill sets beyond that of magic gave the Civil War era performers broader appeal. The tradition of adding other variety art forms to ones act continues today, though ventriloquism is rarely found in the acts of well known magicians. Rather, good ventriloquists have established their own shows minus any connection to magic.

Basically, the more things change, the more they stay the same. Well, in magic, they don't seem to change too much. Another way of looking at it is good magicians recognize quality effects and keep them! But I can't help but wonder, how many effects have fallen out of favor over the years which could be brought back, updated and still fool modern audiences?
Posted by Carnegie