Sidney Radner has passed on & Other News 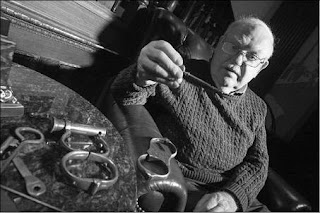 A few days ago Sidney Radner died at the age of 91 in Holyoke Mass. He was the foremost collector of Houdini props in the world. He received the bulk of his collection from Houdini's brother Dash Hardeen, (Theo Weiss). No doubt Sid is right now sitting with Houdini trying to explain WHY he didn't burn all the props as was specified in his Will. I'm sure Sid is trying to point a finger at Theo, shifting the blame, lol. But in all seriousness, who can blame him? It was a wonderful collection while it lasted. I think it was 2004 when he sold the collection at auction.

We've witnessed the end of an era really. Today, there is a new crop of Houdini collectors. As surprising as it might seem, the interest in Houdini continues to grow and grow each year. I'm constantly amazed at the number of new Houdini photos that show up. I'm still anxiously awaiting the day when a Houdini Vanishing Elephant Poster pops up out of no where. It's going to happen ( I HOPE).

Anyone know the status of The Official Houdini Seance? Is it 'officially' over now that Sid is gone?

On a similar note, Cannon's Great Escapes is closing it's door. Mark and Sheila are very much alive, thankfully. But they've chose to close things down and are selling off EVERYTHING, and I do mean everything! Want a Water Torture Cell? Mark has one for sale! Interesting times we live in. Prior to Cannon's it wasn't always so easy to get escape equipment. Mark made it much easier with his website and conventions. The customer service they provided was just fantastic. In two days that will be gone forever as well. I do wish Mark and Sheila the best of luck in all their future endeavors. They are super nice people!

Any thoughts who might fill the gap left by Cannon's Great Escapes closing?

Speaking of closing their doors, CreativeMagic.net, aka Brian Daniel and his wife have decided to close the doors on their business, but they've done it in a very interesting way. They are selling EVERYTHING, all their products to their customers in 'bundles'. Basically for one price, you get one of everything. The website says it's $10,000 worth of items for $3600.00. That frankly is a steal. I have a number of their products and they are great! In fact, I'm using one of them this summer in every show. Sorry to see them go, but I'm sure it's not the last you'll hear from them! Best of luck to Brian and Rebecca Daniel!
Posted by Carnegie