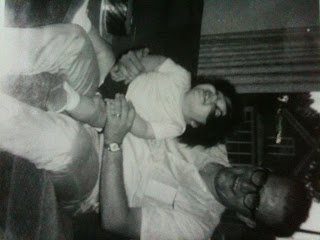 A few weeks ago, I wrote about why Mom's are Awesome. Well today is Father's Day and I got to thinking about how Dad's bring a whole different set of qualities to the table. I have memories of my Dad working out at the Gym with the then Baltimore Colts Football players, among them Johnny Unitas. My Dad was like a super man, always very strong. Years later when we lived on the farm, I remember wrestling with him and he still was strong as an ox, and I was no weakling, but I couldn't pin him for nothing!

I also remember him dressing up like Santa Claus one Christmas and I knew it was him because of his shoes. I'm sure that burned him up at the time but it's sure funny looking back.

Anyway, there are like a gazillion things I learned from my Dad. And there are a few I didn't learn. I didn't get his mathematical abilities, I think my brother got those. I didn't get his musical abilities, again, I think maybe my brother got those. I didn't learn car repair. But I don't think he was big on car repair either, so can't blame him there. I did pick up the sports bug from my Dad for a while. He took me to my first Orioles game in Baltimore, in the old Memorial Stadium! Wow was that ever cool. We actually went there a number of times over the years. And we've been to a game there at the new stadium as well.

When we lived in N.H. my Dad was a big Boston Bruins fan, so guess what, so was I! I don't think he ever took me to a game, but I remember seeing a program he had with Bobby Or and Phil Esposito. Moving to VA, hockey kinda got lost in the warm weather sadly.

My Dad also got me my first paying show. He was always supportive (he and Mom both) of my then hobby and eventual career. He helped me build my first illusion (that we never finished). It was a Zig Zag Illusion. We did take the wood from it and made other props with it though. He built my first show tables, while Mom made table drapes. Years later my Dad helped me build a Tip-Over Trunk, a Sub Trunk and also helped repair and refinish a countless worn out illusions. And Mom was always there to assist as well.

Oh and there were the smaller pieces that he either built or we did together. He built a cool prop to vanish rings and scarves, which I'm once again using THIS Summer. He and I built a tray that I needed for the recreation of a Doug Henning/Orsen Welles routine. Most recently, we built some non magic related items that are just as amazing as all the magic props.

Probably more than anything my Dad taught me how to think on my feet and to think for myself. He's one of a kind and the best father a guy could ask for. As for parents, my brother and I won the lottery.

HAPPY FATHERS DAY!!! Love you Dad, you're the best! 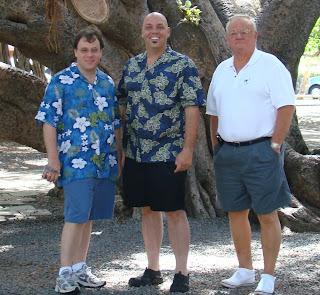 Email ThisBlogThis!Share to TwitterShare to FacebookShare to Pinterest
Labels: Dad