My friend Eugene, The Magical Genie 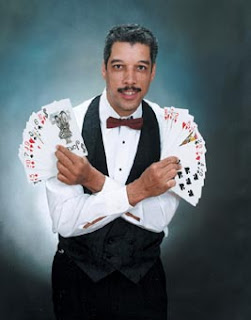 It's with a heavy heart that I write this piece about my friend Eugene Johnson. Eugene and his wife and sister in law were killed by a drunk driver this past Sunday evening. The shock is a bit overwhelming. Eugene was a magician and a very special guy. I never heard Eugene ever say a bad word about anyone and he always had a smile on his face. He was the first one to laugh when someone told a joke.

Back around 1995 I was giving Eugene magic lessons. He had taken lessons from someone else but was not totally happy and I volunteered to help him. We had quite a few laughs during those times. I remember him telling me that he had this idea for a magic character called 'Eugene the Magician, or Eugenie The Magician'. I suggested he call himself 'The Magical Genie' and sure enough he did and that would remain his moniker for the rest of his performing career.

One of my favorite memories of Eugene was during a show we did together called "The Super Show of Magic". Eugene had a dove act and we offered him the opening spot in the show. Sure enough, he came out and thrilled the audience with his fast paced dove productions. When the dove act was over he spoke for the first time and said "Hello I am The Magical Genie" in some kind of foreign like accent. And then a moment later he dropped the accent and said "I think I'm going to stay out here, I like it out here!" This was because he was having such a fun time on stage and he was doing such a great job. You couldn't help but like Eugene, he was such a kind-hearted guy.

I remember my friend Adam would always crack Eugene up whenever they saw each other and he would always say "you're so crazy", referring to Adam's wild sense of humor. The other guy who would just totally crack up Eugene was Denny Haney of Denny and Lees Magic Studio. I know Eugene admired and loved Denny. He considered him his mentor and Denny shared many valuable pieces of show business advice with him. It was nice to see the Washington Post interview Denny about Eugene. In the article, Denny mentions what a great magician Eugene was and points out his unique character. He also brought up the time when Eugene was first working with his 'magic turban' and accidentally burned his eyebrows when a burst of flame shot from the turban!

When Eugene did his dove act, the early version, he would come out with the turban and a burst of flame would come out and a bird would appear. Later though he added a large genie lamp that he would rub and a smoke would billow out and a bird was seen in the middle of the smoke. I have to say, that fooled the crap out of me and I was so proud of Eugene for his accomplishment.

I hadn't seen a lot of Eugene in the last couple years though we would talk on the phone from time to time. I just heard the news of his death a few hours ago and I'm still not even sure how to handle it. I just want to pick up the phone and say "hey Magical Genie, whats up?" but he won't be there. I'll miss him. He was one of the good guys. My thoughts and prayers are with the family during this difficult time. RIP Eugene.

UPDATE: Services for Eugene and his wife and sister in law will take place on Saturday June 11. Services will be held tomorrow (wake at 10, funeral at noon)
Flowers can be sent to the First African Methodist Episcopal Church of Manassas, VA: 10313 South Grant Avenue Manassas, VA 20110.

Here is a link to the article in the Washington Post.
http://www.washingtonpost.com/local/magician-among-those-killed-in-pr-georges-crash/2011/06/06/AGZgYbKH_story.html
Posted by Carnegie