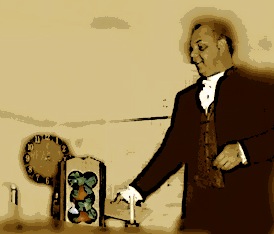 About a year or so ago I really became intrigued with Robert Houdin. Understand, I've always been fascinated by him, but for some reason, it took hold extra strong about, well maybe two years now. At any rate, I was reading everything I could get my hands on. I was just devouring the existing literature on Robert Houdin. And then I had this crazy idea of putting together a small act AS Robert Houdin. It was going to be something I did for the local magic club.

Because I have no automaton and couldn't get my hands on any, those would be out. Sadly, automatons were a big part of his act and I needed to do something to mimic an automaton if not really present one.
I also went through the the literature to see if there were any modern effects I could use that dated back to his time and sure enough there were.

I don't speak a word of french, but I did try to incorporate a few french words as well as french music and a french accent and costume. I have to say the finished act, which was about 15 or 20 minutes long was really fun to do.  I presented an unusual version of Cards Across, The Cabalistic Clock, The barehanded Vanishing Scarf, and a rather strange rendition of the Orange Tree Illusion.

The Orange Tree was the automaton but not an automaton. I told the story of how I, as Robert Houdin, came upon the idea of the tree. Kind of like a 'back-story' to the trick, which formed the presentation for the routine. A box that looked like the box that Robert Houdin's Orange Tree sat on was displayed and showed that it was without any mechanical parts. But a key inserted into the side was still able to wind up the invisible clockworks. And it did end with oranges appearing, and with a chosen scarf appearing inside an orange, though without the butterflies which are in the Robert Houdin version.

All in all the short act was very well received. I thought seriously about putting together an entire show AS Robert Houdin. I even found a couple automaton that I could borrow. But in the end, I decided that I'd do better to focus on my own act, and leave the Robert Houdin idea for another time.
Posted by Carnegie

Email ThisBlogThis!Share to TwitterShare to FacebookShare to Pinterest
Labels: Houdin