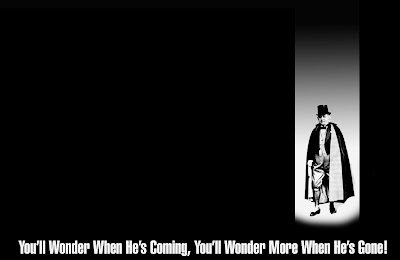 As a student of magic, I often think about what it would have been like to meet some of the historical characters in our art. Of course it goes without saying, though I am saying, that I'd want to meet Houdini. He is hardly the only one. I'd love to meet Kellar, Blackstone, Fu-Manchu, Thurston, Robert-Houdin, Dante, Herrmann, Richiardi, and the list goes on.

But there is one guy who kind of stands out, I suppose because he was a little peculiar and yet his magic was incredible. His name was Max Katz Breit and he was born in 1873 in Ostrov, not far from the border of Poland and Austria. His performing name was Max Malini, or just Malini. I first encountered Malini reading stories that Dai Vernon shared in his Genii column 'Vernon Speaks'. If Vernon looked up to Max Malini, then he is surely someone we all need to pay attention to.


Max Malini was an odd looking character, probably someone that you'd think would be unable to fool you. But he was a master of misdirection and he fooled the rich and famous, presidents and kings and the best minds in magic. He befuddled and bewildered not with big illusions or fanciful props but instead with ordinary objects, often borrowed objects. Because of where he was born, he spoke with a heavy European accent which might have hindered lesser performers but Malini used it to his advantage. He wore the latest fashions and gave the impression that he was quite wealthy. 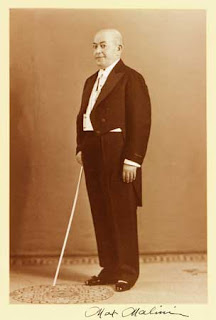 One of his most famous feats was the production of a block of ice or a brick underneath a borrowed hat. I believe this was the first story that I had read by Dai Vernon. He said that Malini would borrow a hat and set it on a table. Then he'd proceed to do a few tricks and later when he went back to the hat, underneath would be the block of ice or a brick. Vernon said he had no idea where this came from. There have been many theories, but I don't believe anyone ever caught Malini loading the block of ice into the hat, ever!

Probably his best known trick was the Egg and Bag. Now Malini did not invent this trick, it had been around for hundreds of years. What Malini did was use a much smaller bag and a slightly different method. He breathed new life into what had become a tired trick. Today, the Malini Egg bag has gone through another revival. When done well it can slay an audience still. It's well worth learning to do it properly as you'll have a wonderful effect that can play for any size audience and for any age audience.

Another trick that Malini used effectively was one that really wasn't part of his show but instead he sprung it on people in informal gatherings. He would basically rip a button off the jacket of someone and before they really knew what had happened he magically restored the button. This singular feat was used numerous times to get Malini booked in various hotels and for private engagements. He even used this trick on an unsuspecting Senator on the steps of the U.S. Capital building, the result of that impromptu event led to numerous bookings.

Yet still another trick of Malini's that still stands the test of time is his Blindfold Card Stab. He would have several cards selected by members of the audience and then shuffle them back into the deck. Next Malini would be blindfolded and he would spread out the cards all over a table and begin, one by one, to stab each of the selected cards. In the Malini Biography written by Dai Vernon he shares a story in which a hotel manager complains to Malini about the holes he put into an expensive piece of furniture.
Malini replies, "No problem, if anyone asks you tell them proudly MALINI DID IT!" The funny thing about that, I'll bet you if that table was around today some magic collector would pay a fortune for that table!

Malini was not a vaudeville performer, nor was he a theatre magician. His typical venue was renting a large room in a hotel and selling tickets to the show. His set up consisted of a three fold screen, a large table and usually some potted plants. Typically, Malini would get the plants donated by a local florist in exchange for tickets to the show. Outside of a deck of cards, there were no apparent magic related props. Even his cups and balls routine used regular drinking glasses that he would wrap with newspaper and then he'd take a cork from a wine bottle and cut it several times so that he'd have the 'balls' for the routine. His absence of apparatus is what I think draws many modern day magicians to him still. Personally, I love the idea of no apparatus, but I am also very much someone who appreciates the wise use of apparatus. More on that another time.

Malini retired to Hawaii and still continued to perform. His final performances were presented from a chair as his health was declining. In the later years he performed mostly for military and servicemen. He died in 1942.
Posted by Carnegie