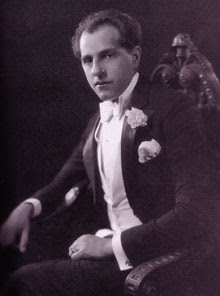 Today, marks the 119th birthday of the man who is arguably America's Greatest Mentalist, Joseph Dunninger. After having researched and written blogs about Robert Heller, William Fay, The Davenport Brothers, Anna Eva Fay, The Great Alexander and others involved in the world of mentalism and magic, I thought it might be time to do some research on the man who became synonymous with mental feats and mind reading.


He was the youngest son of Nickolas and Carolene Dunninger. He had two older brothers Louie and Max. Joseph was born in Brooklyn NY on April 28, 1892. His father was a tailor and as a child he often spent time at his fathers shop. During one visit he met both Buffalo Bill Cody and Sitting Bull. They relished the young boy with their tales of the Old West. This would continue to be an interest for Joseph throughout his life.

He apparently first encountered magic by seeing some street magicians. At the young age of seven he gave his first paid magic performance. Upon seeing a performance of the great Harry Kellar, Dunninger knew that his destiny would be as a magical performer and he followed that path the rest of his life. 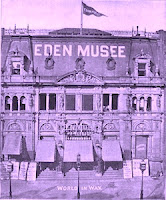 In 1913, he began to appear at The Eden Musee on 55 West 23rd Street in Manhattan. The Eden Musee was a Wax Museum which also had a concert hall inside. It opened in 1884 in what was then the entertainment center of the city. Along with being able to see the wax figures of famous historical characters, one could also see a performance.

In his early days he was billed as "The Mysterious Dunninger". His performances included escapology and straight magic and illusions. In the mid 1920's  he was picked up by the Keith's Vaudeville Circuit.  It appears this is the time when he began to introduce mental feats into his show. 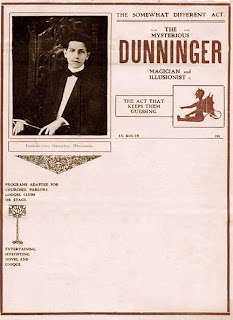 Though interestingly, Dunninger would always include a little magic in his show even in later years. Modern mentalists shun any association with magic, but Dunninger actually presented the Linking Rings in his show. He was such a charismatic performer that I bet his Linking Rings appeared to defy any sort of explanation.

Dunninger was friends with Houdini and they shared many interests including an interest in the debunking of fake spirit mediums. From what I've read, Joe Dunninger was also a collector like Houdini in both historical magic props and books. The Dunninger Library once held over 30,000 books.

Houdini had a number of things going for him, including his unusual act that set him apart from others and his ability to adapt to the changing times. When everyone was trying to copy Houdini, he would offer newer and bigger thrills. He saw the value of movies and jumped in with both feet. He took to the air as a pioneer aviator. He kept abreast of all the changes in technology and used them to his benefit. In his final show, Houdini was producing a woman from a giant radio, you don't get much more topical than that!

Dunninger, like Houdini was unique. When others were featuring mentalism with two people, Dunninger presented it solo. With the help of his friend Walter Gibson, Dunninger moved into radio and became the first person ever to present feats of mind reading, or as he would call it, thought reading over the air waves.

Outside of the world of magic Walter Gibson was known as the writer for
The Shadow pulp fiction novels.  There is some question as to whether or not Gibson actually created the character of the Shadow, but it is likely that he was so inspired by Dunninger's performances that he added some of his unique qualities to the character. The Shadow would go on to become a popular radio serial, and eventually a movie.

Many vaudeville comedians moved from Vaudeville to radio and then from radio to TV. Folks like, Jack Benny, George Burns, Bob Hope and others. Well, Dunninger too, left radio and went to television with his own TV series as well as countless guest appearances on other shows. It was said that Dunninger's voice was more recognizable than that of the President of the United States. All the while he was involved in radio and TV he was also getting top dollar for his live two hour performances. 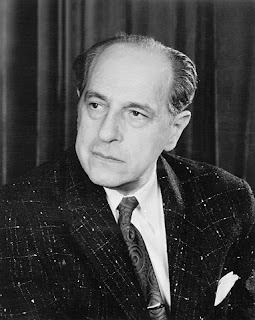 I really think that Dunninger filled the void left behind by Houdini. This is not meant to disparage the names of folks like Thurston, Blackstone, Dante or others. They were all great magicians and legendary performers. But in the minds of the public, Dunninger was different, his type of magic, like Houdini's escapes, was something that seemed real to people. Plus he had a platform to promote himself that none of the big illusionists of the day had, he had mass media on his side. He also had a one man show, which was easier to travel with and far more profitable than a touring illusion show.

During his career Dunninger became a household name. He performed for celebrities, Presidents and royalty.  Everyone who was anyone wanted to have their minds read by Dunninger. His career spanned from 1899 to 1971, 72 years of entertaining the public!  In 1971, he was forced into retirement because of Parkinson's Disease. He died on March 9th, 1975 at his home on Grant Avenue in Cliffside Park New Jersey.

I just finished reading a book written by his daughter Maxine Dunninger Hohneker called "Daddy was a Mind Reader". With me, not really knowing much about Dunninger, I found it quite informative. There are some revelations in there I never could have dreamed of.  And the bonus is there are also tidbits in the book about Houdini that I was unaware of as well. I would encourage you to check it out. There is a rumor that she might write more about her father. I for one hope that is true as the world needs to be reminded what an incredible talent he was.