We all know that Hardeen succeeded Houdini in the show and received all his props when he died. But did you know that years before there was another person set up to take over for Houdini? It turns out there was a protege that Houdini not only hand picked but also trained and to whom he supplied the equipment*.


His name was William Leonard Hicks and he was born in Owenton, KY on November 6th, 1887. His father, Thomas Hicks was in the hotel business and moved often when job opportunities came his way.

When the boy was 12 years old, he and his family were living in Richmond Virginia.  In April of 1900, Houdini performed for a week at the Bijou Theatre on East Broad Street in Richmond VA. Young Mr. Hicks was present during his week long engagement.  Houdini opened on April 23rd to a packed house. His act consisted of his Challenge Handcuff routine and the Metamorphosis.

During the first part of his act, police officers brought regulation handcuffs to secure Houdini. He stepped behind his 'Ghost House', which was small curtained cabinet that he would kneel in to work some of his escapes in private. Houdini arose from the cabinet free of the cuffs. 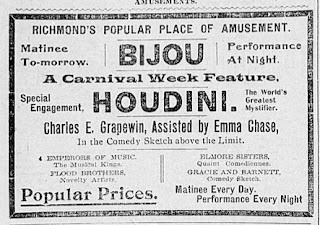 A second demonstration of handcuff release took place but this time Houdini presented the escape in full view of the audience. To complete his set, he and Bess presented his signature routine called The Metamorphosis, which was a lightning fast (three seconds) exchange between He and Bess. Houdini would be tied and secured into a cloth sack. The sack would go into a trunk and that was locked and roped. A curtain was pulled around the locked trunk and Bess would step into the curtained enclosure. She would count to three and Houdini would burst forth, free from the trunk! When the trunk was opened, the sack was removed and inside the sack was found Bess Houdini with her hands tied!

Whenever Houdini came to town, he didn't just do a show at the theatre, he often continued with daily exhibitions. His second day in town he went to City Hall to give another demonstration of handcuff release. This time however, to prove he kept no concealed keys, he had his mouth covered with plaster and the tied up with cloth. He was also stripped of his clothes. Captain Angle and Chief Howard of the Richmond Police Department placed shackles on Houdini's wrists and his ankles. Houdini stepped behind a chair that had a piece of carpet thrown over it to partially hide Houdini from view. The audience of some 40 people could see Houdini moving around but his method of escape was kept from prying eyes. Two minutes later Houdini the Handcuff King was free from his bonds.

One of his favorite impromptu bits of magic that he would perform both on stage and offstage was his famous East Indian Needle Trick. Following his naked cuff escape he presented the Needle trick for all of the invited guests and gathering crowd. A doctor who was present in the audience came up to examine Houdini's mouth before and after the effect. He left them completely bewildered and he received a nice write up in the Richmond Times-Dispatch.

There is a good chance that William L. Hicks, who would later be referred to as Leonard Hicks in magic circles, read about Houdini's exploits in Richmond and we know he saw Houdini perform live while he was in town.

Houdini was such a big hit in Richmond, that the management of the Bijou Theatre, arranged to have Houdini return in May 1900. They had to buy out his contract at a NY theatre just to get Houdini back in Richmond! He played a week and headlined a festival in Richmond.

Remember, Leonard Hicks was only 12 at the time. But he was not the only person inspired by Houdini. A Mr. Lee Reinheimer and Mr. Moses May were two individuals also taken in by Houdini. So much so that by June of 1900 they declared that they could duplicate the feats of Houdini and for several months following did just that. They presented handcuff escapes as well as the Metamorphosis. It's probably lucky for them that Houdini didn't return to Richmond as he probably would have gone after them or had his crew attend a show and go after the copyists.

Six years from this time, Houdini is now in Chicago. He is performing in the Windy City and he and Bess are having trouble with the hotel in which they are staying, so they switch to different hotel. When Hicks saw Houdini he was living on a dairy farm with his family. But now in 1906, he and his father were both working in the hotel business. Hicks was the hotel clerk that checked in Mr. and Mrs. Houdini. To use modern day slang, Mr. Hicks gave Houdini the 'hook up', meaning he got him a VERY nice room. Houdini showed his appreciation by inviting Hicks to see his show at the Majestic Theatre. 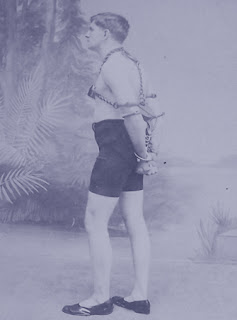 The two must have developed a friendship which was partially based on Leonard's ability to figure out the act and even make suggestions about it. Houdini was impressed with the young man and by the end of his contract in Chicago Houdini made a suggestion of his own to Leonard Hicks. He told him that he should try out a career in show business. In fact, Houdini offered to train him. That very summer, Leonard Hicks was a temporary resident of 278 (Houdini's home in NYC) where Houdini was teaching the young man the finer points of his escape act.

He changed his performing name to 'Harry Leonard and/The Great Leonard'. According to the Kalush Biography, Hicks even printed up business cards which declared he was the only one authorized to perform Mr. Houdini's act. I wonder if Hicks told Houdini about Reinheimer and Mays in Richmond?
The act he presented was the Challenge Handcuff Escape Act along with the Metamorphosis. When Houdini went to Europe in 1908, Hicks also started presenting the escape from the Galvanized Iron Can Filled with Water better known as the Milk Can Escape. (Just for the record, this is an example of ANOTHER Milk Can known to exist)

For whatever reason, show business didn't keep it's hold on Leonard Hicks and he eventually returned to the hotel business. He would gradually work his way up from Desk Clerk to Assistant Hotel Manager in the 1920s of the Morrison Hotel in Chicago and then Hotel Manager. By 1930 he was the President of the Lorraine Hotel in Chicago and he was president of the American Hotel and Motel Association. He worked and managed a number of hotel properties in the Chicago area.

Later in life he moved to Florida and was the owner of the Casa Marina Hotel in Key West Florida. Below is a photograph signed by Mr. Hicks. As he became a success in the hotel business he used his real name William L. Hicks, but notice this photograph is signed Leonard Hicks. I wonder if the couple in the photograph might have seen him back in his escape days? Leonard Hicks is on the left in the white coat.

William Leonard Hicks died in Florida on April 2, 1966, the one time protege of the World's Greatest Escape Artist.


*I don't know if Houdini GAVE the props to Hicks or if he sold them to him. But it is true Houdini trained Hicks at his home in NYC.

I have a feeling this is not the last word about Leonard Hicks. I'm going to continue hunting to see what other things I can dig up. If anyone has information on his career, please contact me at
info@carnegiemagic.com
Posted by Carnegie