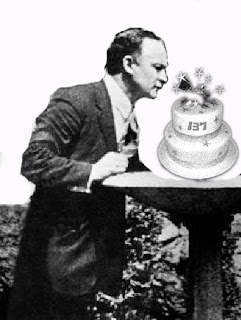 Today is the day in which Houdini actually celebrated as his birthday. It's possible that he never knew his real birthday and if you go over to WildAboutHoudini.com, John Cox has a few more things to add to this.

Let me give you my take, and please know this is my opinion. For the past few months I've been delving into the world of genealogies. Digging up information on where my family originated has been exiting at times and frustrating at others. After having read through hundreds of different Census Records, I've noticed a very common trait. People prior to the 1900s didn't seem to either record or remember their dates of birth. Perhaps it wasn't important to them. It's very common to find a Census record for say 1880 that lists one birth date or birth year and then when you find one from say 1910 for the same person, the dates have changed. Birthdates and years are often recorded as 'about 1880' or 'abt 1900'.

Churches and temples often kept the official records. Today with birth certificates, it's easy to show that information. But in Houdini's day it was not always the case. Even Harry's brother Theo has two birth dates. I never looked into it, but I wonder if other members of the family celebrated different dates as well?

There is a nice 5 page article in the October 1971 issue of the Linking Ring by Bob Lund called "Somewhere West of Budapest, Somewhere East of Appleton" that delves more into the issue of the March 24th date over the April 6th date.

In any case, today is ANOTHER Houdini Birthday and the one HE celebrated.