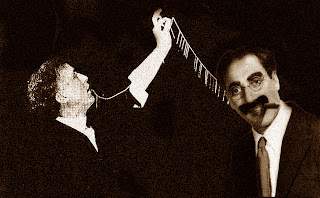 Imagine these two entertainment icons on stage at the same time. Well it happened, and Groucho shared it with his audiences many times over the years. The first time I heard the story was when Merv Griffin shared it with Orsen Welles on his TV show. But there is nothing like hearing Groucho tell the story.

Here is the story in Groucho's words:


There were times when I used to wear a mustache, and there were times when I didn't. I got tired of wearing it, and I would take it off, because if I didn't have a mustache on, people didn't bother me in the street. Then one night I went to the Wintergarden, and Houdini was appearing there, and I was sans mustache. That means 'without'. Gotta watch yourself at the Wintergarden. Anyway, I'm sitting in the second row, and Houdini is now doing a trick. He would take some needles and put them in his mouth, and a spool of thread, and then he would thread the needles. So he asked for a volunteer out of the audience, and who do you think went up on the stage. And he opened his mouth wide. "I wanna prove that there is no trickery to this trick. What do you see in there?" And I said "Pyorrhea!" and left the stage.

If you'd like to listen to Groucho tell it...