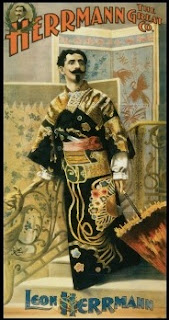 According the a NY Times article dated Jan 3, 1897, Leon had worked previously with both Alexander and his older brother Carl in their shows in Europe and South America so he was not just starting out in magic but had a firm background in the art.


He only worked with Adelaide Herrmann for three seasons before the personality clashes got to be too much and they parted ways.

One of these days I'll cover the Herrmann family more in depth.